A few days ago we looked at why it’s getting more difficult to get a job in Australia.
Then after I’d shown you that, I tormented you with why Australia is so great!
Now, here is the official almostadoctor guide to moving downunder.

The popular idea is to take ‘a year out’. Work for a few months here, travel for a few months there, work for a few more months here. And it’s a great idea! But I’m just not sure quite how feasible it is these days. Many of the places where I applied wouldn’t look at any applications of less than 12 months. Some people I know have got 6 months placements and do plan to do the travelling thing. But I was more into the idea of emigrating permanently, so this didn’t bother me too much. Just be aware when applying, you may want to make yourself available for 12 months (at least initially, once you’ve got the job, you could always quit early… (you didn’t hear that here).

Now, being medics, we are generally the organized, planning, goal setting types. And the problem with applying for a job in Australia and New Zealand, is that their schedule just doesn’t tie in with ours very well.

The ‘doctor year’ in the UK generally runs August to August, with perhaps a few exceptions here and there. In Australia it runs January to January, and in New Zealand, its November to November.
This means it’s difficult to get something to start in August. There are some positions, but not many. It’s like trying to get a 3 or 6-month job to start in April in the UK.
The different start date also means that you might not get any jobs or job offers until July or August – just weeks or days before your current UK job finishes.
So, rule number one:
1)    Do not panic!
Right about now (November/December) you friends (and maybe you too) will all be applying for various specialties, allover the place. People will be talking about it a lot. Deadlines. CVs. Portfolios. Audits. Interviews. Exams. It can get a bit stressful, if you are seemingly doing nothing whilst your peers are running at full speed competing against each other. So chill out. Your plan isn’t to apply right now. You aren’t competing against these people. But you can still use this time to prepare your CV and start firing out some emails. You’re going to be sending a lot of emails.

Don’t panic even if you haven’t got a job come next August. From August to Christmas, the job offers come in thick and fast. Many of my friends who had nothing lined up when their FY2 job finished subsequently secured something and moved out by November. And my inbox is flooded with job offers from all the agencies I signed up to almost every day at the moment.

Where to start?!
As we saw last week, it’s going to be competitive. So decide where you want to go. Or you can just go for the blanket approach and apply everywhere (this is what I did)… 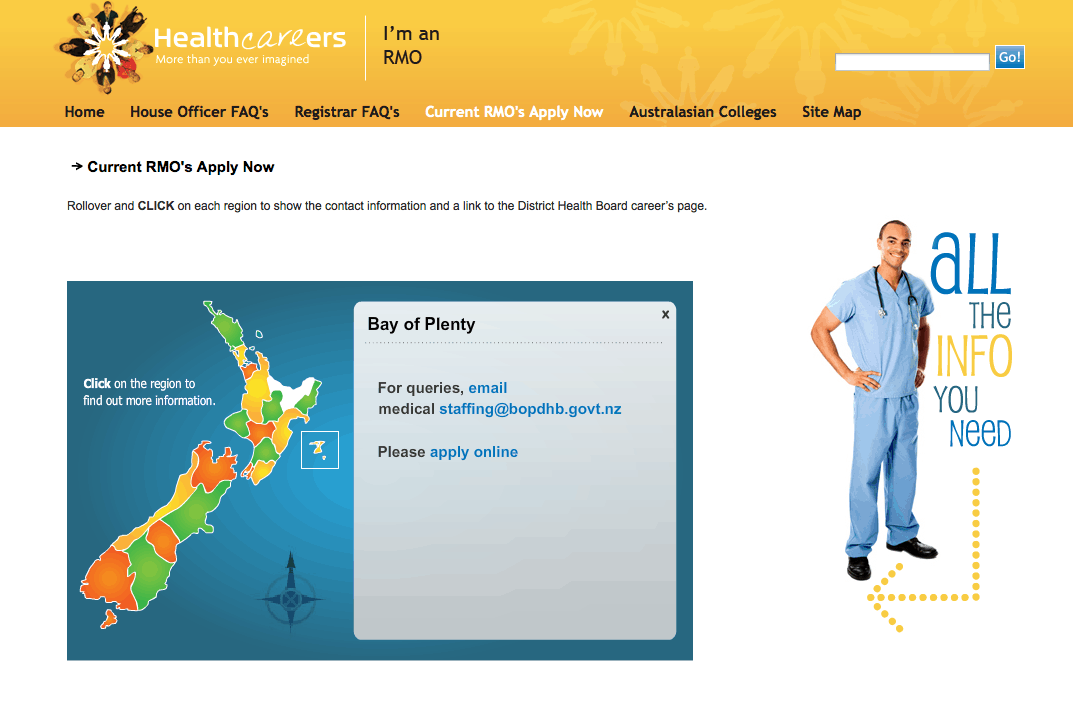 Wavelength – They got me my job! Very friendly. Helpful with all the visa and paperwork stuff. Did take a while to find out if I’d actually got the job after the interview.

Vista – Based in the USA. Really helpful and persistent staff. They would call me up every week with an update, always readily available to chat, and very honest about what options they had (mostly stuff in Perth, not good for NZ). I wasn’t really interested in Perth, but got the impression that if I was, they could have got me something pretty quick.

Challis – send out lots of very promising looking emails with their offers (often several placements a week in various locations in Australia and NZ), but I found when I replied that they weren’t particularly helpful and nothing came of anything I put my name to.

International Medical Recruitment – when I spoke to them around November 2012 they said it was too early. Call back in spring.  When I spoke to them in March 2013 they said they didn’t have much on offer. Did get a lovely phone call from a rep one day, but basically said that I would be looking at jobs starting in Feb 2014.

So, after looking at the options, you basically have got three good avenues:

The New Zealand National Recruitment scheme
All the regions offer all of their SHO and Registrar jobs to start in November to any applicant who applies through the Health Careers Website. So, literally, each hospital in NZ will require SHOs and Registrars in all their specialties. That’s a lot of jobs. And on that website you can see them all and apply to them. I applied maybe to 20 different jobs at various places and specialties.

I didn’t have anything lined up in June. I was getting worried. Then I got an interview for the job I got in Australia. And I also applied to New Zealand’s national recruitment scheme. I got the job in Australia, and accepted it. Then about 2 weeks later I had 4 interview offers from my applications to New Zealand. So it all came good. But it took until July.

In summary, my top tips are:

Well, good luck guys! I’ll probably be competing against you all again next year if I decided to stay / or go to New Zealand, so please put in a good word for me!

Any questions, use the comments!

Part of the Moving to Australia series

Diagnose it yourself – DIY – The Baby That Can’t Breathe