Stevens-Johnson syndrome (SJS) is a rare, but serious and potentially fatal skin disorder. It is an immune-complex mediated hypersensitivity reaction. The term toxic epidermal necrolysis (TEN) was previously be believed to be a different disorder, but is now considered to be part of the same spectrum as SJS, although TEN is more severe.

In SJS and TEN there is “sheet-like” skin loss, almost always caused by a drug reaction. About 10% of cases of SJS and 30% of TEN are fatal.

The mechanism is not understood. 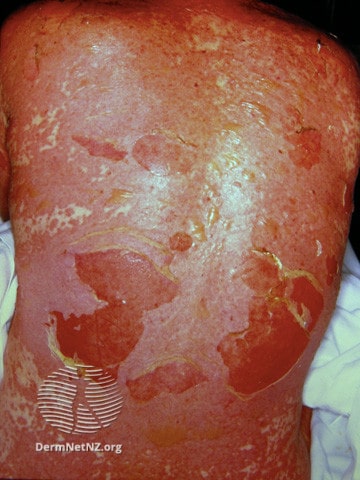 Stephens-John Syndrome. Image from DermnetNZ and used in accordance with the licensing requirements of Creative Commons Attribution-NonCommercial-NoDerivs 3.0 (New Zealand).

Diagnosis is clinical. The severity of the disease is classified by the percentage of skin detachment:

As the disease progresses, the classification may change

SCORTEN is an illness severity score used in SJS and TEN. Score is associated with mortality. One point is given for each criteria:

Mortality risk based on SCORTEN score:

There is no specific treatment that can alter the underlying course of the disease. Treatment is focussing on treating the cause (if infective), and supporting the end organ dysfunction. Many patients end up in intensive care.