Tests that will elicit cerebellar signs are in Red
Tests that will elicit sensory ataxia are in Blue
The method of the test is in Green
If you are asked to test a person’s co-ordination, or asked to check for cerebellar signs, then in the OSCE, (and in a clinical situation), you don’t necessarily have to do a full examination. This article will show what to examine for in these situations
Have a system!

It makes it easier to remember what to do, and you are less likely to miss anything out. We will start at the top of the body, and work down

Eye movements – mainly cerebllar
In the case of cerebellar disorder, there may be Nystagmus.

Ask the patient to follow your finger, whilst you make an ‘H’ shape roughly about 40cm infront of their eyes.

The adducting eye is unable to move past he midline on binocular vision. Eye movements are normal when one eye is covered. See full article on MS for more details. 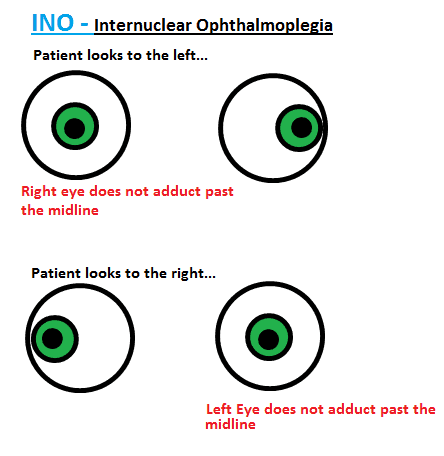 Dysarthria – cerebellar defect
Ask the patient to say their name and address. If speech appears normal in tis response, ask them to say the phrases:

At the same time, you should try to assess the scanning quality of the voice. Patients with cerebellar disorders may put equal emphasis on all words so that normal scanning quality is lost.

Note that any co-ordination activity may be repeated with the patient’s eyes open and eyes closed. If the activity is worse with the eyes closed, this is highly suggestive of a sensory ataxia and not a cerebellar disorder.

Ask the patient to hold their arms out straight infront of them, with palms facing downwards, and fingers pointed forwards (a bit like a zombie). Keep eyes closed. Ask the patient to stay like this for 30-60 seconds (or as long as they can manage). You may also press sharply downwards on one of the outstretched arms and view the response.

Ask the patient to out the back of one hand on top of the back of the other hand. Then to rapidly pronate and supinate the hand on top. Normal patients will be able to do this rapidly. In both cerebellar disorders and sensory ataxia the movements may be slowed and inaccurate.

In this test you should only move the distal inter-phalangeal joint. Hold the finger from both sides at this joint, so that when you move the distal phalanx, only this joint is involved in the movement. When moving the phalanx, hold the finger at the side, so as not to give away the type of movement by which side of the finger you are pressing on! With the patient’s eyes open, demonstrate which movement is up, and which is down. Get the patient to close their eyes, and then ask them which way the joint is moving.
In both cerebellar and sensory ataxia JPS may be reduced, although more likely to be true for sensory ataxia. Remember that patients can guess right 50% of the time anyway – so you have to do it several times! If JPS is intact at one joint, move up to the next largest joint.

Ask the patient to put the heel of one foot onto the knee of their opposite leg. Then to run the ankle down the shin to the ankle. Lift of the heel and repeat.

Ask the patient to sit on the side of the bed with their arms folded. See if they can maintain balance. Repeat the test with eyes closed.
This indicates a midline cerebellar problem.

This is THE TEST to distinguish cerebellar defects from sensory ataxia.
Ask the patient to stand up, with feet together. Be ready to catch them! Ask them if they feel unsteady if they are noticeably struggling at this point, it may not be suitable to perform the test.
If they seem reasonably steady, then ask the patient to close their eyes, and hold their arms out infront of themselves. Then watch and see if the patient is able to stay steady, or if they begin to wobble.

This can exaggerate any ataxia. Ask the patient to put one foot infront of the other – heel-to-toe as they walk along