Multiple Sclerosis (MS) is a chronic inflammatory condition of the CNS. It results from demyelination and axonal loss of nerves in the CNS. Peripheral nerves are not affected. It is one of the most common neurodegenerative conditions. It results in many and varied neurological deficits which don’t always fit an obvious pattern.

The typical age of onset for MS is 20-40, and is 3x more common in women. It is considered an auto-immune disease, whereby a combination of environmental factors can precipitate the disease in a genetically susceptible individual. These environmental factors can ‘prime’ the immune system to attack myelin. The prevalence is directly correlated to the distance from the equator at which the patient has lived in pre adult years – the highest incidences are in cooler climates, the age at which the patient contracted Epstein-Barr virus (older age = greater risk), and a history of smoking.

Typically cases can be relapsing and remitting (more common and better prognosis) or progressive. Pregnancy is thought to be preventative against relapses.

A single episode is known as Clinically isolated syndrome (CIS). This refers to a set of neurological symptoms that last >24 hours before resolution, caused by inflammation or demyelination in the brain, optic nerves, or spinal cord. A patient needs to have two or more episodes to be diagnosed with MS. Between 35-50% of those who have a CIS will go on to develop MS.

Multiple sclerosis is a demyelinating condition, but there is also always axonal loss. This process is caused by some sort of autoimmune reaction against myelin and oligodendrocites – the mechanism of which is not exactly known. CD4 T cells mediate an attack on white matter, specifically on the oligodendrocites – which produce myelin, and on myelin itself.
There is destruction of myelin, and axonal loss. Antibodies to Myelin basic protein seen early on in the disease. Normally, macrophages cannot easily cross BBB, but in Multiple Sclerosis, they exhibit glycoprotein α4 β1, allowing them to adhere to and cross the endothelium.
At the active lesions – called plaques – there are increased numbers of inflammatory cells, and it is thought that essentially Macrophages digest the myelin sheath. As well as this, the macrophages produce nitric oxide which directly damages the axon.
Active lesions (plaques) are sites of inflammation, and show up on MRI as white blobs, roughly 2-10mm in size.

Plaques can be found anywhere in the CNS, but particularly in the :

They can be seen as white areas on MRI scan:

These are essentially due to conduction block / axonal loss at the site of the plaques. Most probably, conductional loss is to blame for the symptoms – and this is why steroid treatment can quickly reverse symptoms – as it rapidly reduces the inflammation, and allows the oligodendrocites time to recover. Axonal loss generally occurs in the latter stages of the disease, and results in progressive and persistent disability.

It is often said that it is a relapsing / remitting disease, but in actual fact there are several patterns of MS.

Note that in all the below instances, the disease progressively gets worse. However! – some people may only have 1 (or a very small number of) attacks of the disease – which we could call benign MS. Essentially, this does not progressively deteriorate, although there is now some evidence that after several decades, there is actually a gradual decline in function, but not on the same scale as other varieties of the disease. 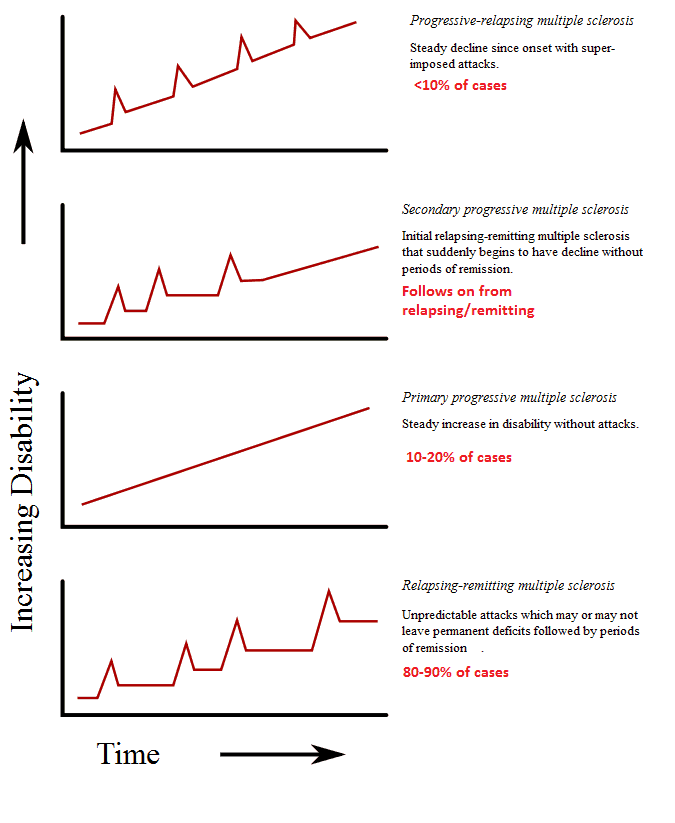 In a:
In severe cases of inflammation, then permanent axonal damage can occur.

Almost any neurological sign can be present in multiple sclerosis, but some are more common than others. Common examples are below. Usually for motor function, the signs are UMN signs, but there may also be LMN signs. Episodes are typically separated by months or years – and often involve a different selection of signs and symptoms in each episode.
Basically, there can be a combination of pretty much any neurological signs! Including both UMN and LMN, however, UMN are probably more common.

A targeted neurological examination design to elicit features specific to MS may be useful in suspect patients:

Peripheral nerve tests, blood/urine samples, and normal EEG are not helpful in the diagnosis.

There is no cure. Management aims at reducing the risk and frequency of relapse and preserving function as long as possible.
The course is very variable, but a particularly bad prognosis is associated with widespread plaques on MRI at first presentation.
The severity is also variable. Some patients may be able to live normally for many years, whilst other will becomes severely disabled.
Acute relapse:
Preventing Relapse and disability
Once a second episode has been confirmed patients might typically start on a Disease modifying drug (DMD). Traditionally interferon-beta was used first-line, however, this has generally been superseded by glatiramer. They have both been shown to have similar efficacy (reduce relapse rate by about 30%) but glatiramer typically has fewer side effects.
Typically, DMDs are only initiated by neurologists.

Many practical changes can be made in a person’s living environment to make life easier; e.g. modifications to cars, walking frames, hand rails etc. Patients may also need counselling over fears of disease progression and sexual dysfunction.