Morphine is a commonly used analgesic in acute and chronic pain. It has been around for a very long time!

It can be given intravenously, intramuscularly and orally.

Failure of morphine is usually due to dose – not giving enough! In the emergency setting give it early and give repeated doses if it is not working. There is no maximum dose – titrate to effect. Make sure the patient is closely monitored and has oxygen and pulse oximetry. It is easily titrated, and reversible – with naloxone – but try not to get to that point! 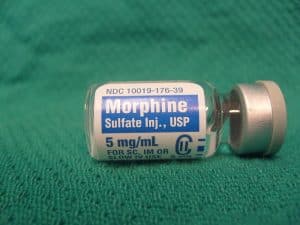 A vial of Morphine

Typical IV morphine doses in the emergency department might include:

In palliative care it is often used in a syringe driver as an IV or IM infusion, with additional bolus doses as required. A typical 24 hour dose might be 10-20mg, with 1-5mg boluses as required.

The use of opiates in chronic pain is widespread, although not without controversy. Opiate dependence is a big problem in many western societies. In the UK, many chronic pain patients, as well as cancer patients, take MST – morphine sulphate. Typical daily doses of MST can be anywhere from 40 – 200mg.

In chronic pain in the absence of cancer, the use of opiates should be discouraged as much as possible and many GPs and pain specialist work hard on ‘de-prescribing’ – slowly reducing the amount of opiates prescribed over time. Going ‘cold-turkey’ is not recommended!

These are similar in all opiates