It is very important to make a distinction between dependence and misuse. Many people misuse alcohol, but not all are dependent. Sign of dependence may include:
All of the above factors are true for drugs as well as alcohol. The factors below are specific for alcohol.
‘Problem drinking’ / misuse of alcohol
We say that this occurs when the consequences of alcohol involve social, physical to psychological harm to an individual.

What are the ‘safe limits for alcohol?

When we talk about ‘alcohol’ we are actually referring to ethanol.
Alcohol is a CNS depressant. It enhances the effect of the inhibitory neurotransmitter GABA. This has an overall inhibitory effect on neurons. Initially, there is a depression of inhibitory neurons (making you feel ‘relaxed’ and disinhibited), but gradually, there is inhibition of many areas of all CNS functions.

There rarely can be Iron deficiency anaemia, or a macrocytic anaemia (form folate deficiency), or a megaloblastic anaemia from B12 deficiency. Or there can be a mixed picture of all of these! Usually the MCV is raised

Many of the condition relating to alcohol are caused by, or made worse by the dietary deficiencies that often accompany alcoholism.

Depression and anxiety are very common amongst alcohol abusers. There are three possible routes by which depression can be linked to alcohol:
More info about alcohol and depression:
Hallucinations related to alcohol are very rare, and should be distinguished from hallucinations that result from withdrawal. In alcohol induced hallucinations, the individual may here second person voices that are usually derogatory. Usually these symptoms will subside within a few days. In cases where the voices do not subside, it is likely there is underlying schizophrenia
Dis-social personality disorder

METRONIDAZOLE and CHLORPORPAMIDE inhibit the action of acetaldehyde dehydrogenase and thus there is acetaldehyde accumulation if you drink whilst taking these drugs. This leads to symptoms of:
Even after very small amounts of alcohol
Basis screening for alcohol in a ‘normal’ hospital patient

High alcohol intake – but not dependant – these people may benefit from methods to help them moderate their drinking without total abstinence (controlled drinking). Such interventions usually involve self-help materials (e.g. a diary of drinking) in conjunction with counselling sessions.
Alcohol dependence – total abstinence is advised. It is highly unlikely that someone in this position will be able to control their alcohol intake to a ‘reasonable’ level. Becoming totally abstinent will require the individual to undergo a period of ‘detoxification’. This is most likely to be successful if done in a controlled environment. This will usually be a medical ward at hospital (not a psychiatric ward!). Methods:

Benzodiazepine – this is given both for sedation, and also for their anticonvulsant effects.Thus you should chose a drug which has both these effects. The dose is gradually reduced over 7-10 days. Usually you start off reducing the dose by 20%, but if the patient is still experiencing severe symptoms, reduce the dose at a lower rate.

Thiamine and other vitamin supplements – these are essential! They help to prevent Wernicke’s encephalopathy. They often have to be given IV – and may need to be given for up to 1 month after.
Fluid replacement – dehydration can be particularly severe. There is also a very real risk of Hypocalcaemia and hypomagnesia.
Disulfiram – is a drug that inhibits acetaldehyde dehydrogenase and thus causes nasty side effect when taken with alcohol. It can help to maintain abstinence – although it usually needs to be given with psychotherapy to be effective
Acamprosate – inhibits glutamate – which is an excitory amino acid implicated in cravings. Acamprosate can help reduce cravings.

The most important predictor in determining if total abstinence is achievable is motivation. The patient has to have strong motivation to want to stop, whatever their reasons may be.
There are also ‘social’ rehab centres – e.g. run by religious groups – which encourage detox, but they have no medical input.

Anything that causes the release of dopamine in the brain can become addictive.
Stages of Change 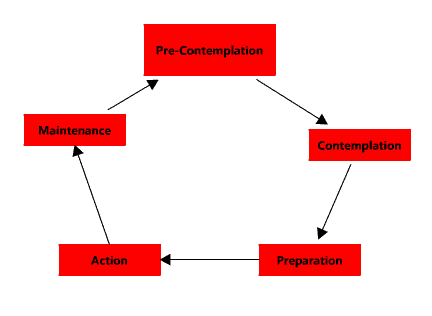 There a psychological model known as the stages of change model, which can be a useful tool in understanding alcohol addiction. It can also be applied to any type of addiction. It shows 5 phases of the addiction, which can then also be applied to abstinence. E.g.:
By working out what phase the patient might be in, we are then able to target our treatment for them. For example, a patient in Maintenance 1, is very unlikely to stop drinking if you simple say ‘It would be good for your health if you stopping drinking.’, whereas a patient in contemplation 2 would probably respond well to some encouragement and asking them about any plans they have made to alter their behaviour.
However – there are still measures you can take whatever phase the patient is in. You can help ‘push’ the patient along to the next state if you use the right techniques. These techniques are known as motivational interviewing. You should encourage / empower the patient to think for themselves, and not try to guide them through the process! For example, if you wanted to encourage a patient in the maintenance or pre-contemplation phases you could ask questions like:

The idea is to get the patient to think about their life from a different perspective. If you try to push them along the path, you will encounter resistance, and the harder you push, the more resistance you will likely encounter!
Don’t tell the patient they have a problem, just allow them to talk about issues. If they say something that you think is a problem, but to them may not appear a problem, just reflect this back at the patient.

There is also the possibility to leave the cycle, and have a ‘full recovery’ between the maintenance and pre-contemplative stages.

This includes the famous Alcoholics anonymous groups, but a similar approach is used in other groups, and for other addictions. In this approach, individuals are encouraged to surrender themselves to a higher power (i.e. God). Patients do not need to be specifically religious, just to have a belief in a higher power. By having the feeling of giving up their choice, many people find it much easier to now give up their addictive substance. Although this approach is not for everyone, it is still very successful.
Generally the 12-steps are recommended to supplement medical and other treatments – e.g. as a follow up treatment after detox. The 12-steps are only really useful for somebody with dependence and not just a heavy drinker.
The original 12 steps are as follows, but they are often slightly adapted to fir different cultural norms:

Early symptoms – these occur within a few hours of not drinking:
These symptoms are often experienced in the morning by people dependent on alcohol. Having a drink will relieve these symptoms. They are the result of autonomic overactivity due to the withdrawal of the inhibiting effect provided by alcohol.
Late symptoms – these peak at 24-48 hours after withdrawal

This typically occurs in middle-aged men with a history of many years of drinking, although it can occur after only a few months of drinking. It only occurs in about 5% of acute alcohol withdrawal cases.
It presents about 3-4 days after withdrawal, and is similar to other acute brain syndromes.
Symptoms
Treatment
Delirium Tremens is a medical emergency! Death occurs in around 10-15% of cases (up to 35% if untreated).It results from epileptic seizure, heart failure, self-injury and infection. Treatment is similar to that of a controlled alcohol withdrawal:
DT usually resolves after 3-4 days, but continuing anxiety may go on for months.
The effects of DT are due to the long term changes of alcohol on the brain. During long term alcohol use there is a decrease in GABA receptors as tolerance develops. so when alcohol is withdrawn, the patient is left with a very low number of inhibitory receptors – and nothing acting on them! so they can an overactivity in the CNS.

Clinical Features
Wernicke’s
The Wernicke’s Triad:
Korsakov’s
This is basically a state of impaired memory function that is present after the signs of Wernicke’s encephalopathy have subsided. It is an anterograde memory disorder – meaning that old memories can be accessed, but that new memories cannot be consolidated. Patients still have the ability to immediately recall facts (e.g. within a few minutes), but have no ability to get this information into long term memory.
Differentials
Treatment
Wernicke’s
Korsakov’s
This is a life-long chronic illness, for which there isn’t really any treatment. thiamine supplements may be useful for some, but after the acute phase, they are unlikely to provide any benefit. Eventually, many patients will require care.
Prognosis

Context of drug and alcohol abuse
Smoking – 120 000 deaths/year in the UK
Alcohol – 20 000 deaths/year in the UK
All other drugs combined – probably <10 000
E.g. there are about 50 deaths ever reported in the UK for ecstasy use only (more when combined with other things – most commonly alcohol)
Changing drinking behaviour on a national level
Several things are known to have an influence of public alcohol consumption

Quick Overview of Types of drugs