Dyslipidaemia (often interchangeably used with hyperlipidaemia) describes raised levels of cholesterol in the blood. This is significant because it is associated with increased risk of cardiovascular disease.

The lipid hypothesis suggests (and is strongly supported by epidemiological studies) that elevated levels of plasma cholesterol causes coronary artery disease as a result of pathological changes in artery walls.

Elevated cholesterol is typically discovered in screening blood tests. The decision to treat depends on multiple factors, which as usually assessed using a cardiovascualr scoring system, such as QRISK3?? or CVDCHECK??.

Statins are the mainstay of treatment. Other lipid lowering drugs are more controversial – such as fibrates – as although they lower measurable cholesterol levels, they have not been associated with a reduction in cardiovascular disease.

Historically the management of raised cholesterol is a controversial topic – “the lipid hypothesis” is still challenged in some quarters even today. The landmark “Scandinavian Simvastatin Survival Study (1994) – aka “4S trial” proved survival benefit for lipid lowering therapies.

Dyslipidaemia refers to a state of an abnormal lipid profile in the blood. Can be:

Technically hyperlipidaemia refers only to increased levels of triglycerides and cholesterol and as such does not include reference to HDL-C. However in practice, the terms dyslipidaemia and hyperlipidaemia are often used interchangeably.

Most cases are related to a combination of lifestyle and genetic factors. It is also important to consider secondary causes:

Levels are measured with a blood sample. A fasting sample is no longer routinely recommended – triglycerides may be falsely elevated in a non-fasting sample, but levels of total cholesterol, HDL-C and LDL-C are not thought to be significantly affected.

It is recommended to have two separate samples at different times to confirm the diagnosis.

Consider specialist referral for patients with a total cholesterol >20 mmol/L. Levels of >10 mmol/L are associated with an increased risk of pancreatitis. Patients with these levels often have underlying familial hypercholesterolaemia.

Any patient with raised cholesterol should also have:

Here we see a blood sample in an EDTA tube. These tubes are placed in a centrifuge and “spun down’ to separate the cells from the plasma, before full blood count and other tests are performed. On the left, we see what a typical normal sample looks like before and after centrifuge, and on the right we can see the results for a patient with hyperlipidaemia – you can quite literally see the lipids in the tube!

Treatment should not be based purely on lipid levels. Typically, levels are used in association with a cardiovascular disease risk calculator (e.g. QRISK3?? or cvdcheck.org.au??) to know when it is appropriate to treat. These calculators use multiple risk factors, including  age, gender, blood pressure, smoking history, left ventricular function (if known) and history of diabetes. The basic principles of these calculators involve treating patients with:

In the example above (cvdchech.org.au – recommended in Australia) – patients should be treated medically when their 5-year risk exceeds 15%, and considered for medical treatment between 10-15% if they have failed or are unwilling to engage with lifestyle interventions.

Be aware that the CVDCHECK calculator and many similar alternatives may underestimate risk – particularly as they do not take family history into account – and it may be necessary to make a clinical judgment in cases of a strong family history as described above.

Also be aware that the calculator can overestimate the risk on elderly men with no risk factors (purely based on age and gender) and may lead to over treatment in this age group.

Refer patients with any of the below for investigation for familial hypercholesterolaema:

Cholesterol levels can be re-checked 6 weeks after an intervention.

Dietary cholesterol accounts for between 10-40% of total cholesterol levels. Specific foods causing elevated cholesterol (e.g. eggs and butter) are probably less important than was previously thought, however the overall quality of the diet is still important.

Pregnancy often causes a transient elevated of LFTs. This is not thought to be of clinical significance and should only be treated if it does not resolve after delivery

Various dietary agents have been suggested to lower cholesterol. These include:

Familial hypercholesterolaemia – FH (aka familial hyperlipidaemia) is an inherited, autosomal dominant disorder. It is a common, but under diagnosed disorder, often encounter in general practice. It affects about 1 in 250 people, and 50% of all first degree relatives of an affected individual.

It results in massively elevated cholesterol levels from birth, which leads to the early development of cardiovascular disease.

Patients may or may not present with the “textbook” signs of:

Occasionally (and I have seen it) when a blood sample is taken is can appear yellow and fatty in the test tube!

All FH patients should be follow-up annually to check the cholesterol levels and to investigate for any evidence of cardiovascular disease. Compliance, particularly in young asymptomatic patients can be difficult.

Once other possible causes have been excluded – such as hypothyroidism, corticosteroid use, renal disease (nephrotic syndrome) and diabetes, then you can assess the patient for FH.

The Simon Broom diagnostic criteria suggest a diagnosis can be made with:

Other scoring systems (such as the Dutch Lipid Clinic Network Criteria – DLCNS) are also used – and are more complex. Online calculators are available. Genetic testing is not always required if a scoring system suggests a diagnosis of FH. If there is doubt over the diagnosis, then offer DNA testing. Also consider offering DNA testing to family members of a patient with confirmed FH particularly children of affected adults. 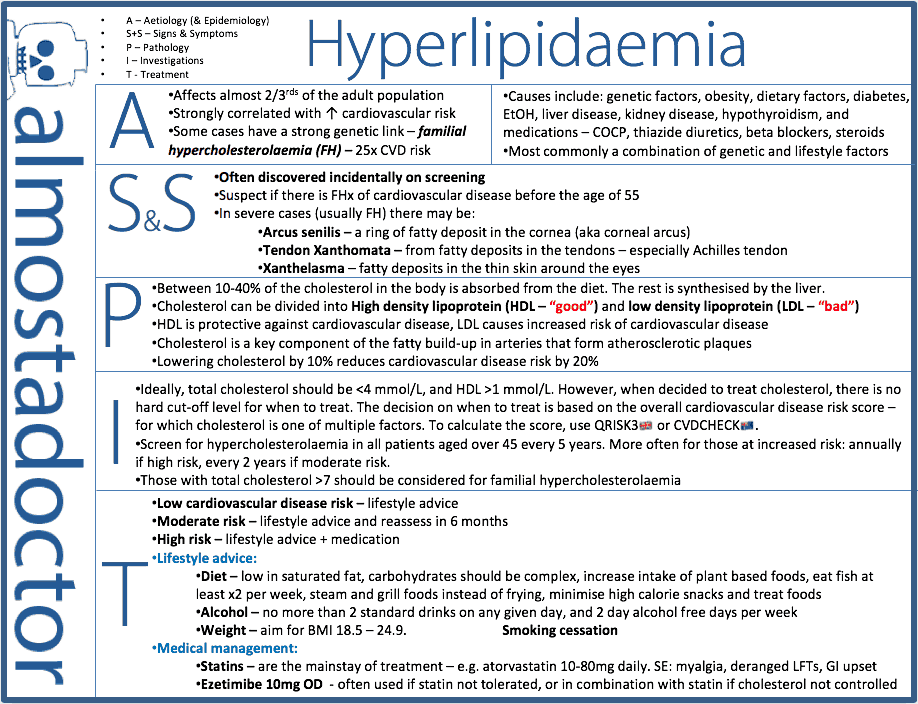