Peripheral vascular disease (PVD, also Peripheral Arterial Disease – PAD) is a chronic condition due to atherosclerosis of arteries in the limbs. The level of arterial occlusion present is proportional to the symptoms. The pathogenesis and risk factors are the same as for coronary artery disease (CAD), and include:
Classically peripheral vascular disease present as pain in the lower limbs which is brought on by exertion (typically the patient will be able to walk a specific distance before the pain comes on) and the pain is relieved by rest. 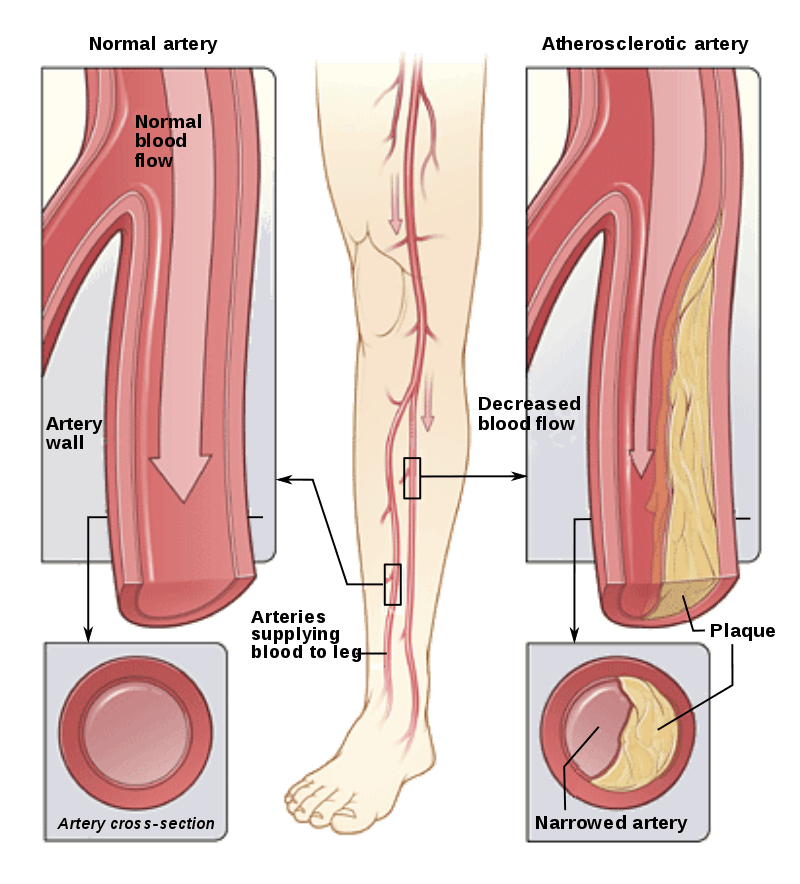 Pathology of Peripheral Vascular Disease. This file is taken from wikimedia commons and is licensed under the Creative Commons Attribution-Share Alike 3.0 Unported license.

The main differential is “spinal claudication” caused by impingement of the caudal equina by a spinal stenosis. This also classically causes pain in the back of the legs on exertion.

Claudication comes from the latin “to limp”, which itself derives from the Emperor Claudius – whom it was said walked with a limp

Claudication – this is limb pain (inc aching, cramping and tired feeling of the legs) upon exertion. It most commonly occurs in the calves, but may also be present in the feet, thighs, buttocks and even arms. The distance a patient can walk before they experience symptoms is known as the claudication distance.

Can cause claudication / buttock pain at rest
Burning pain at night, due to elevation (which reduces limb perfusion), and is relieved by hanging the legs over the side of the bed (very bad sign!)
Patients may have:

The diagnosis can be made on the basis of a suggestive history and examination, in conjunction with an ABPI <0.9.

After diagnosis is made, typically a patient may be referred to the vascular team for further investigation, which would typically include a CT angiogram of the lower limb.

This is a measure of the ratio of the blood pressure in the ankle and the arm. As peripheral vascular disease affects the legs more than the arms, it can be used as an indicator of reduce arterial blood flow in the legs.

The most likely differential diagnosis is a neurological cause – typically compression of the spinal cord due to spinal stenosis – sometimes referred to as neurogenic claudication. This can cause a similar pattern of pain on activity in the buttocks, radiating down the legs, alleviated by rest.

The aim os PVD treatments are to improve the walking distance and lower limb circulation.

All patients should be given:

Surgical treatments are typically reserved for patients with very severe symptoms or where tissue destruction is present.

Indications for specialist referral include:

Percutaneous Transluminal angioplasty – PTA – is useful for short lesions (usually <5cm) in big arteries. A balloon is used to widen the artery, which in some cases, may be enough on its own. In many cases, a stent is also placed. Particularly useful in iliac artery disease (successful in 75-90% of patients), and also successful in 50-70% of thigh and calf disease patients.