Hypothyroidism (aka myxoedema) is a common disorder which presents most frequently in women and the elderly. It can usually be managed in primary care without the need for specialist involvement (unlike hyperthyroidism) and is typically straight-forward to treat, although it does require ongoing monitoring. As the symptoms can be non-specific, be on the lookout, particularly in women over 40.
The two main causes are:
The onset of the disease is gradual, and will be associated with a rise in TSH levels – as the hypothalamic-pituitary-thyroid axis tries to combat decreasing thyroid hormone (T4/T3) output.

Hypothyroidism is typically treated with a daily dose of thyroxine – 1.6 μg/kg lean body weight daily. This is usually a dose of 100 – 150mcg daily.

Most cases are managed in general practice and do not require specialist involvement.
Unless there is an obvious goitre or neck mass, imaging is not usually required.
There has been considerable research into the benefits of screening and managing thyroid dysfunction in pregnancy, but the general consensus at present is that screening is not beneficial, and other than recommending routine iodine supplementation, the diagnosis of hypothyroidism is no different than in non-pregnant patients.

The functioning of the thyroid gland is dependent on the hypothalamic-pituitary-thyroid axis.

It is crucial to understand this process to be able to interpret thyroid function test blood results.

Hypothalamic-thyroid-pituitary axis. This file is taken from wikimedia commons and is licensed under the Creative Commons Attribution-Share Alike 3.0 Unported license.

There are several different pathologies that can lead to hypothyroidism, and several ways of classifying these. The simplest method is to separate the causes into autoimmune (Hashimoto’s and atrophic hypothyroidism) and non-autoimmune (everything else!).

Atrophic hypothyroidism
Do NOT confuse this with auto-immune hyperthyroisidm (Grave’s disease)!

Image modified from original images taken from SMART by Servier Medical Art by Servier and is licensed under a Thyroid gland. Creative Commons Attribution 3.0 Unported License

There may be massive fibrosis, but not much evidence of lymphocytic infiltrate. (This is different to Hashimoto’s thyroiditis, where the infiltrate is much greater). By the time of diagnosis, often there will be few thyroid follicles remaining.

The availability of tests for TSH has meant that hypothyroidism is now often noticed before it causes significant clinical signs and symptoms.
The differential diagnosis is vast due to the vague symptoms, but hypothyroidism should always be excluded as one of the first possibilities. It often presents in middle aged women – and in such patients, chronic fatigue syndrome and depression are common differential diagnoses.
The onset of symptoms can give a clue as to the cause:
Appearance

The ‘classical’ patient will have dry hair, thick skin, a deep voice, cold intolerance, have weight gain, bradycardia and constipation, and will be generally slowed in their thoughts and actions. The diagnosis for these patients is fairly easy.
Patients with more mild symptoms are harder to diagnose as their symptoms may be so vague as to sound like just general tiredness.
Particularly difficult to diagnose, due to lack of classic symptoms are:

Thyroid stimulating hormone (TSH) is the main diagnostic test. A high TSH suggests hypothyroidism – the diagnosis is then usually confirmed with a T4 level. Together, TSH and T4 are often referred to as Thyroid function tests (TFTs).

Interpreting TFTs is an important clinical skill and takes a little bit of practice.

Interpreting TFTs. Adapted from a diagram in Thyroid – afp

The only effective treatment is oral T4 – usually referred to as levothyroxine and occasionally thyroxine.

Usually treatment is lifelong – except in cases where transient disease is caused by severe illness or drugs.

Pregnancy – in pregnant patients you should increase the thyroxine dose by 25-50µg to ensure normal TSH levels and up until 20 weeks gestation, levees should be checked every 4 weeks. This is particularly important, because babies born in mothers with raised TSH have an increased risk of impaired cognitive function.

Depression – patients with hypothyroidism are at increased risk of depression, but in the elderly patient, sometimes a severe psychosis may develop – often shortly after commencing treatment. This will subside with prolonged treatment. Treatment is lifelong and patients have a normal life-expectancy. Occasionally patients may stop treatment and remain euthyroid. 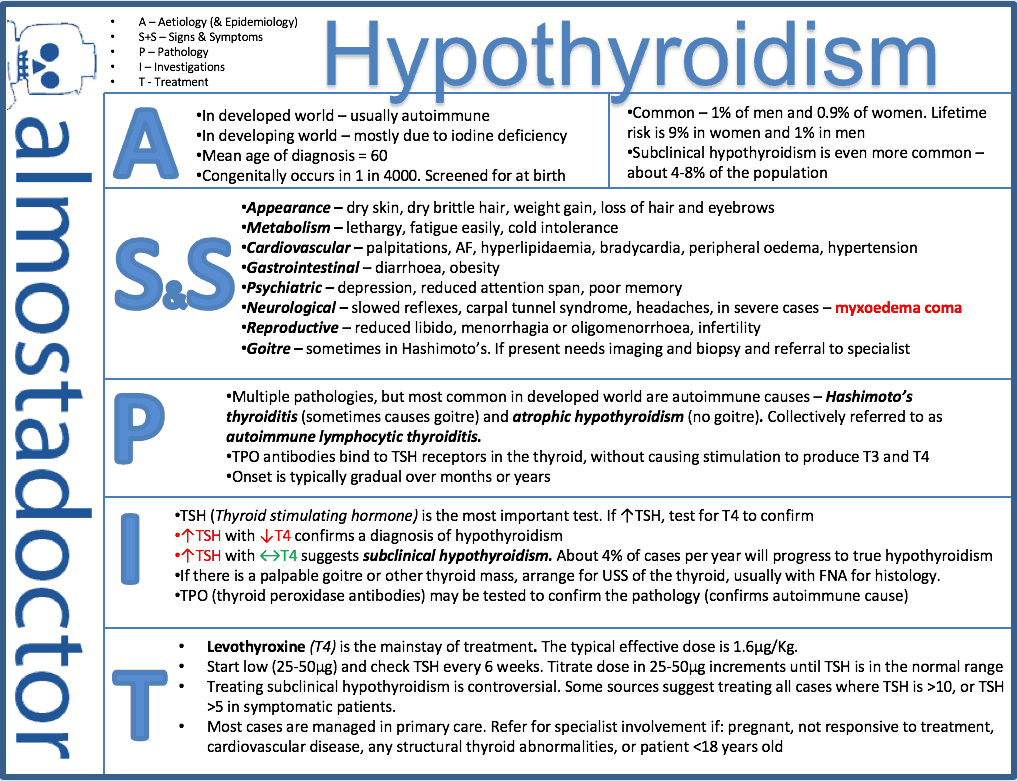