Lightening strike injuries are rare. It is estimated there are about 300 injuries and 100 death per year in the USA (a country with a population of about 320 million people) – which gives an incidence of about 1 per million. Worldwide lightening strikes cause 24,000 deaths per year.

In direct current, the direction of flow of electrons remains constant.

This can have implications for the injuries caused. In a DC current injury, there is usually a single massive muscle spasm and the patient is often pushed away from the source of the electricity. This means a short duration of exposure, but a higher likelihood of trauma from the mechanical force of being thrown away from the source.

Conversely, an AC current can often induce tetany in a patient causing a prolonged muscle contraction. This can lead to an increase in burns in AC injuries as the patient involuntarily cannot let go of or move away from the source.

Resistance also plays a role in the type of injury received. The greater the resistance of a substance, the lower the current that can flow through it. Normal skin has a high level of resistance. Wet skin however, has a very low level of resistance. This is an important factor during lightening storms – where a wet patient is likely to receive a greater injury than a dry patient – if they both receives the same ‘source’ of electricity.

The extent of the injury i directly related to the current  that the patient received. Current can be calculated using Ohm’s Law:

So, current (and therefore injury) is greatest when voltage is high and resistance is low. Resistance can be impacted by many factors (different body tissues have different levels of resistance), but clinically probably being wet or dry is the main thing that matters. Otherwise, the resistance of a human being is fairly constant.

So if we assume R is constant, then the current – and the degree of injury – are directly related to the voltage. Therefore, we usually class injuries as high voltage (>1000V) or low voltage (<1000V).

Normal AC electricity supply in most of the world is 220V, and 110V in America.

There are three ways that lightening can injure a patient:

In lightening strike there are four type of strike:

The most common organ injuries are to skin, heart and brain. 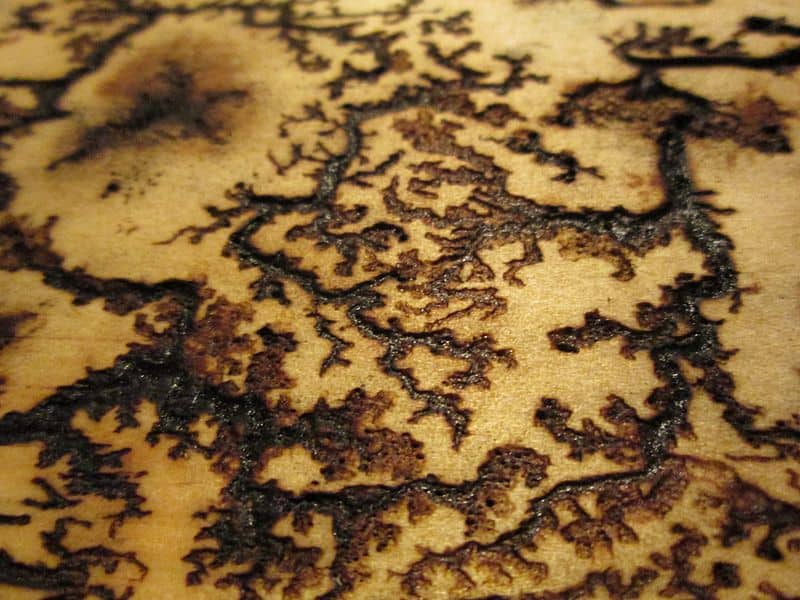 Almost any other organ can be damaged. Peripheral vessel clots are not uncommon (and large vessel clots can also occur), and there may also be renal problems (often AKI secondary to rhabdomyolysis). Intra-abdominal complications and lung involvement are rare but not impossible.

Eye injuries are also seen including retinal and optic nerve injury and cataracts.

Be careful! – Patients may appear ‘dead’ – pupils fixed and dilated and in respiratory arrest and asystole – but both of these can be transient and self-resolving signs of lightening strike