Atrial fibrillation is a common tachycardia. It is significant, as having the condition increases the risk of stroke.

Atrial fibrillation is present in:

Lone AF – refers to cases where no cause can be found. Many cases initially labelled as lone AF have a cause discovered upon further investigation.

Atrial fibrillation is often asymptomatic– especially in chronic AF – but acutely it can present with:

As well as being a presentation in its own right (often a patient with palpitations), atrial fibrillation is commonly seen as a secondary result of another cause – typically pneumonia, sepsis or one of the other causes outlined above.

Atrial fibrillation causes an irregular atrial rhythm between 300-600bpm. The AV node is unable to transmit beats as quickly as this, and thus does so intermittently, resulting in an irregular ventricular rhythm. This irregular stimulation of the ventricles reduces cardiac output by up to 20%, as well as allowing stasis of blood in the heart chambers.

This is AF <48h hours duration. patients will usually be younger and are more likely to have an identifiable cause.

This is a condition where short spells of AF come and go, and upon investigation, the patient may often be in sinus rhythm.
Use the ‘pill in the pocket’ treatment – i.e. flecainide or sotalol PRN – these drugs control the rhythm. Only suitable if systolic BP >100, and no underlying LV dysfunction

Anticoagulate (as for chronic AF)

Acute AF – the symptoms have been ongoing for <48h. Often amiodarone will also have been given to these patients.
Chronic AF

DC cardioversion
After cardioversion continue with all the pre-cardioversion medications. Review at 3 months. Most patients who relapse do so within the first month. If still in sinus rhythm at 3 months, then you can begin to think about stopping some of the drug treatments.
Drug cardioversion

Amiodarone is usually the drug of choice. Can be given:

Flecainide may also used, but it is negatively inotropic (reduces the strength of contractions).  Used in patients with no known IHD or WPW syndrome.

For more info on drugs used in arrhythmias, see the Drugs that affect the cardiovascular system article
Continuing Anticoagulation
Anticoagulant therapy may be continued even if normal sinus rhythm has been restored, if other RF’s are still present. Use the CHADS2 sclae (below) to decide on the risks of continuing anti-coagulant therapy. Only discontinue anticoagulants if:

Stroke! – the risk of thrombo-embolic stroke, and thus the degree of anticoagulant therapy required in atrial fibrillation can be assessed using the CHA2DS2-VASc score. Any score above 2 requires anticoagulation: 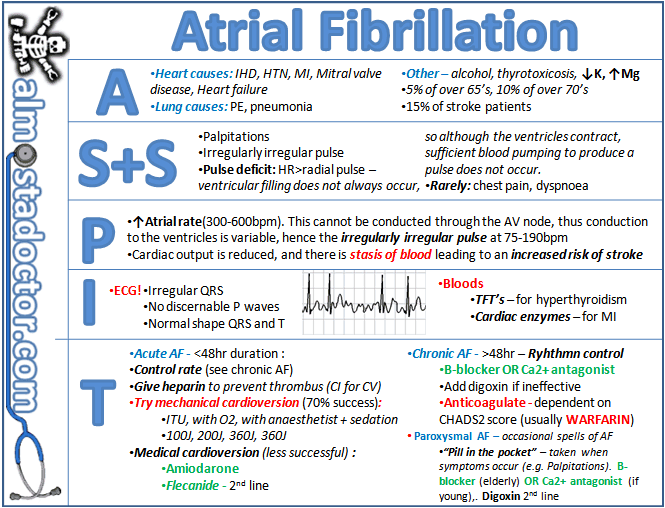