Stroke is a sudden onset of brain dysfunction, caused by an alteration in cerebrovascular blood supply. It is characterised by:

Stroke is often a clinical diagnosis – confirmed with imaging

These are very similar the same as those for cardiovascular disease:

Note that low dose aspirin has no proven beneficial effect, and in fact, high usage of cox-II inhibitors increases the risk.It is also now thought that low dose oestrogen (e.g. in the contraceptive pill), does not significantly increase the risk in otherwise healthy women.

CADASIL – a rare, inherited cause of stroke and vascular dementia. Caused by a defective NOTCH3 gene. There are multiple small infarcts in the brain. Often presents as migraine and depression in teenagers, and by the 20’s and 30’s there are often TIA’s and strokes. Dementia may follow after age 40-50.

* Amaurosis fugax – this is a sudden loss of vision in one eye, caused by an infarct in the retinal artery(ies). You can sometimes see the obstruction on ophthalmoscopy, which is useful clinically, as the same symptoms is seen in migraine – where the arteries will always appear normal. Thus if a defect is visible, it is highly likely to be the result of a TIA

**Transient global amnesia – this involves an episode of amneia, that usually occursin those over 65, and completely resolves within 24 hours. Unlikely to happen more than once in the same patient.

Usually symptoms resolve in 24 hours. If not, or if you suspect something more serious, then follow the same protocol as for stroke; detailed below.

The clinical impact is very varied, and depends on both the size of the infarct, and the location. They can vary from infarcts that result in death, to ones that are completely clinically silent. TIA is somewhere in the middle.

The most common stroke presentation is in a branch of the middle cerebral artery – affecting the internal capsule. A similar set of signs will be caused by internal carotid occlusion. In these cases there is:
Contralateral

Not usually any headache – there are no pain receptors within the brain itself
Not usually any LOC
VERY RARE – epileptic seizure at the time of onset.
Recovery

If there is headache and/or impaired consciousness then the cause is likely to involve some sort of swelling, and thus if the onset is acute, it is likely to be haemorrhagic.

When examining a patient for stroke, you should perform a ‘general examination’ to check for clues as to the origin of the lesion:
Eyes 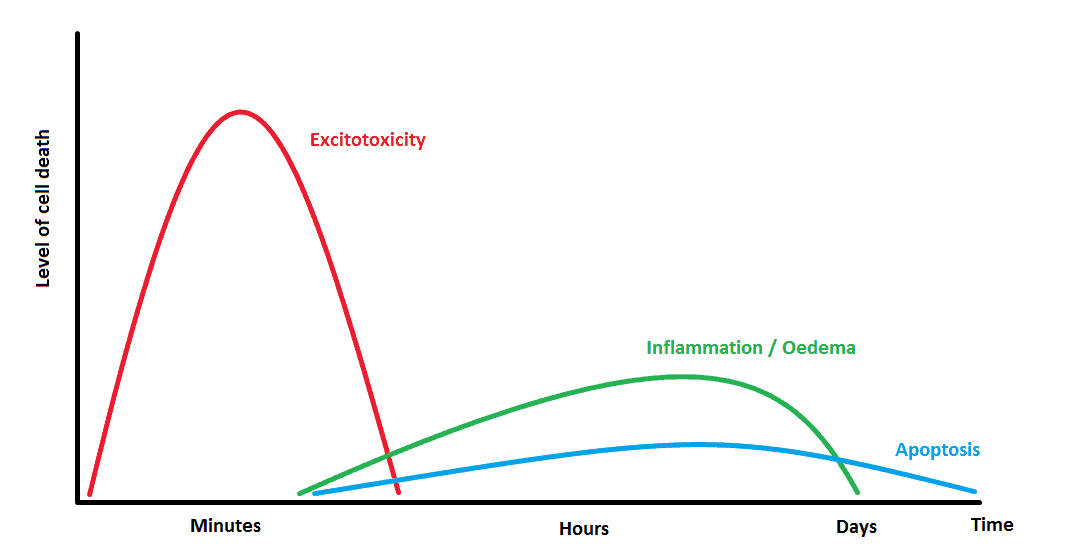 Carotid and Vertebral Artery Dissection
Accounts for just under 20% of strokes in those under 40, and is often the result of trauma. There may be symptoms resembling stroke, TIA, or migraine, with pain at the site of the dissection.

These can result in wide varying, and complex symptoms, depending on which nuclei are involved, and if the involvement is bi or unilateral.
Examples of clinical features:

There are several particular recognised patterns of brainstem stroke:
Wallenberg’s syndrome / lateral medullary syndrome / posterior inferior cerebellar artery thrombosis (PICA) – all mean the same thing. Presents with acute vertigo and other cerebellar signs. Due to the nature of the cerebellar pathways, there are the following signs:

Coma – from a stroke affecting the reticular activating system
The locked-in syndrome – the patient is aware and awake, but virtually all motor neurons are paralysed, and thus the patient cannot move. Usually the eyes are the only structures not affected. Caused by an upper brainstem infarct.
Pseudo bulbar palsy – the result of a lower brainstem infarct. Results in bilateral impairment of the 9-12th cranial nerves. There is dysarthria and dysphagia.

Infarcts in the deep arteries of the brain, may account for up to 25% of ischaemic strokes. They can be seen on MRI, and are commonly noted at autopsy.
Often it is symptomless
it may present with very localised symptoms – as the infarct affects a very localised part of the brain, such as purely sensory symptoms, or purely motor symptoms.

Encephelopathy literally means ‘damage to the brain’, in this case, as the result of malignant hypertension. This hypertension can result in TIA’s, stroke, and more rarely, subarachnoid haemorrhage. There is commonly papilloedema, which can be due to either of the main causes:

Go here to see the full article on Dementia

Anton’s Syndrome – Infarct affecting on the visual cortex
May present with hemianopic visual loss, and no other features. Can be distinguished from pathology of the optic nerve due to the fact that the visual field is affected.

The result of an infarct on one side of the midbrain, it presents with:

Infarctions will always show up as a wedge shape on both CT and MRI.
Haemorrhage – blood appears bright white (dense) on CT – but the longer it has been present, the darker it becomes. After 1-2 weeks it may be indistinguishable from brain tissue.

Diffusion MRI scans – these detect abnormalities much earlier than on normal MRI and CT – especially in the case of infarction. Thus they are useful to confirm the diagnosis earlier than can be achieved with other methods.

This test can show areas of stenosis and thrombus formations. It is also useful for looking for aneurysms.
If carotid stenosis is present, then 80% of these patients will benefit from surgery, if they are fit enough to undergo it.
You may want to perform a carotid Doppler as a cheaper and easier alternative to look for carotid stenosis.

Hypertension – this is common in early stroke, and generally untreated. If other signs point towards malignant/underlying hypertension (e.g. large heart on CXR, retinopathy), then consider management.
ECG – checking for AF as a source of emboli. If present, treat accordingly
CXR – checking the size of the heart (hypertension) and particularly the size of the left ventricle (AF). If you are particularly concerned, you may also want to do an echocardiogram.
Bloods –basically to rule out other differentials:

Pretty much indistinguishable clinically from infarct, although:

Haemorrhages are nearly always the result of uncontrolled chronic hypertension.

The blood will collect around the brain tissue and compress local areas, resulting in neurological dysfunction. Large bleeds can increase intracranial pressure enough to cause herniation of the brainstem, and/or further infarcts in the midbrain and pons. It is this mechanism that is likely to cause loss of consciousness. Blood can also leak into the ventricular system, causing acute hydrocephalus.

As soon as you are confident of the diagnosis of ischaemic stroke or TIA, and the patient has no contra-indications, you should initiate treatment. Thrombolysis is under-used in the UK – probably due to doctors fears that there may be haemorrhage present.

In reality, many patients will have contra-indications for thrombolysis, and thus is cannot be used. Instead, they should be offered:
Aspirin – 300mg/day for 2 weeks, then 75mg day

Dipyridamole – should also be given if ischaemia confirmed by CT / MRI.
The use of warfarin should be considered once the cause is known (i.e. if AF, or if definite thrombosis). Treatment range s usually an INR of 2-3.

Carotid endartectomy – is also considered in many patients. Those with carotid obstruction of >60% are generally considered.

Haemorrhagic Stroke
Treatment is essentially supportive. If anticoagulants and antiplatlets have been given, then the effect can be reversed with vitamin K, fresh frozen plasma (FFP) and platelet transfusions.

If the haemorrhage causes a mass of >3cm diameter, then surgery can be lifesaving.

Physiotherapy – helps to prevent spasticity and contractures. Also teaches patients how to cope with their current level of function
Speech therapy

Preventing strokes in those who have never had one before

Preventing another stroke in previous sufferers.