“Stoma” is the Greek for mouth or opening. In anatomy, a stoma is technically any opening of the body (such as the mouth or anus). However, usually in medicine when we refer to stomas we are referring to artificial, surgically created stomas, most commonly of the bowel, and sometimes sometimes involving the urinary system. 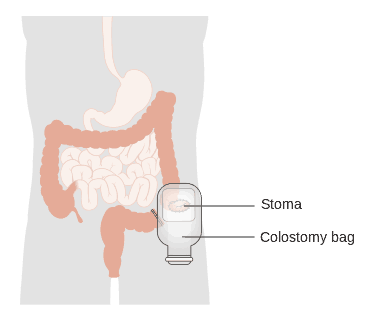 Comparison of colostomy and ileostomy

Most commonly used after cystectomy for bladder cancer. Also occasional required in severe renal disease, or after complications of bowel surgery (e.g. where accidental damage has occurred to the bladder or ureters).

Often the procedure is performed at the same time as resection of bladder cancer.

Usually, an ideal conduit is used. A terminal ileum should not be used, as this is the part that reabsorbs bile salts. The distal ends of the ureters are usually attached individually to the piece of ileum.

Colonisation of the ileum with bacteria is almost universal, and UTIs are common. 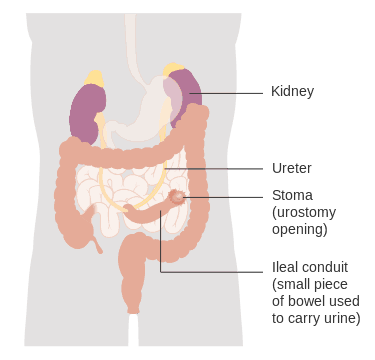