An abdominal x-ray (AXR) is a commonly performed x-ray for some gastrointestinal presentations. Generally, its use is limited – many abdominal conditions are better diagnosed clinically, or with an abdominal CT scan, and it is not as useful as a chest-x-ray. Most of the important structures in the abdominal are soft tissues of similar density, and thus not well defined on x-ray, and lots of organs overlie other organs, so it’s not always easy to tell which bit is which. As a result, abdominal x-rays are not often particularly useful.

Despite this, because they are easily available, a lot of patients end up having AXRs when they present with acute abdominal pain. It is also worth noting that an AXR will expose a patient to up to 35x more radiation than a CXR (because there’s a lot more ‘dense stuff’ to fire the x-rays through – and a lot less air!).

Before requesting any investigation you should be able to justify how the results will change your management plan. If it won’t change the management, then there’s no need to do it!
In one study (Stower et al – Evaluation of the plain abdominal X-ray in the acute abdomen. J R Soc Med 1985 ) the results of abdominal x-rays only changed the management plan in 4% of patients!

If you suspect any of the following, then abdominal x-ray may help confirm your diagnosis:

Use a system to make sure you don’t miss anything. Most solid objects (solid things appear white-ish on x-rays – we call these “opacities”) will be clearly visible. Check the size of the small and large bowel loops.
Small bowel obstruction 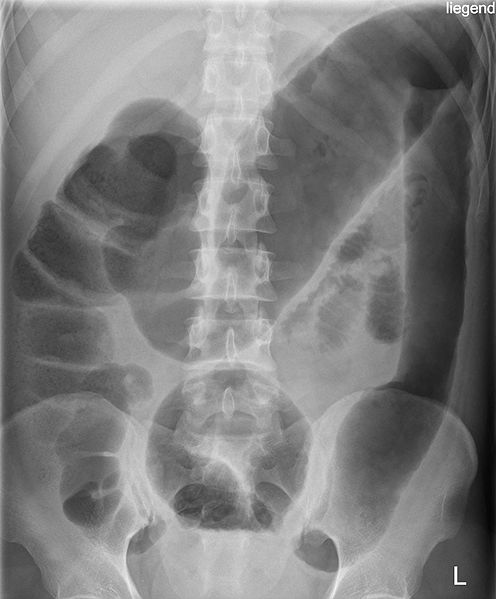