Thalassaemias are autosomal recessive inherited disorders of haemoglobin, causing structural deficiencies in haemoglobin molecules. As such, they are a type of haemoglobinopathy.

Haemoglobinopathies typically present with a microcytic hypochromic anaemia which will NOT respond to iron. In the most severe cases, thalassaemias can be fatal in utero or in the first few months of life, but most cases are of mixed genetic background and are mild.

They are also often referred to as thalassaemia major, thalassaemia intermedia and thalassaemia minor – however this classification usually refers to the severity of the disease (usually when referring to β-thalassaemia).

The vast majority of cases are of minor disease and are typically asymptomatic. The most severe forms of the disease (rare) are incompatible with life and can result in miscarriage or death of the newborn. In between these extremes is Thalassaemia major – a serious condition, which often manifests in infancy with failure to thrive, fevers and bony (including facial) deformities. It can be cured with bone marrow transplant (if available) but is usually treated with lifelong recurrent blood transfusions . These patients often become iron overloaded and as a result require iron chelation therapy, and regular cardiac and liver monitoring under the supervision of a multi-disciplinary team.

Over 300 mutations have been identified and the clinical severity of the disease varies widely.

There are two genes that code for α chains. That’s easy to understand. And then thalassaemia starts to get very complicated.

There are 6 possible genotypes. You will definitely NOT be expected to know all of these unless you are a haematologist. But, for completeness – here they are*:

*I presume the genotype notation was first used before texting smiley faces became “a thing”!

Unlike in β-thalassaemia, haemoglobin electrophoresis is usually normal.

There is only a single gene that codes for the beta chain – which makes β-thalassaemia slightly easier to understand!

Newborns are born with large amounts of HbF – the γ chains in HbF are slowly replaced by β chains in the first years of life. This process is highly variable. The typical presentation for β-thalassaemia is around the end of the first year of life, but it can take up to 5 years.

Defective β-chain synthesis usually results in increased alpha-chain synthesis. Excess alpha chains will precipitate in red cells and cause the red cell walls to be weakened. These fragile RBCs will subsequently be destroyed in bone marrow and the spleen. This causes a progressive splenomegaly as well as bone marrow proliferation – which results in bony deformities.

In milder cases (Hb >90 g/L) there are rarely any signs or symptoms. In more severe cases, signs can include:

A child with failure to thrive and a microcytic anaemia should be strongly suspected of having a haemoglobinopathy (most commonly thalassaemia).

Thalassaemia can be a differential for any other causes of a microcytic anaemia, such as:

The aim of treatment is to prevent Hb falling below 95 g/L. Many patients will require life-long blood transfusions, although bone marrow transplant (stem cell transplant) is curative, and likely to have better outcome when performed at an earlier age. 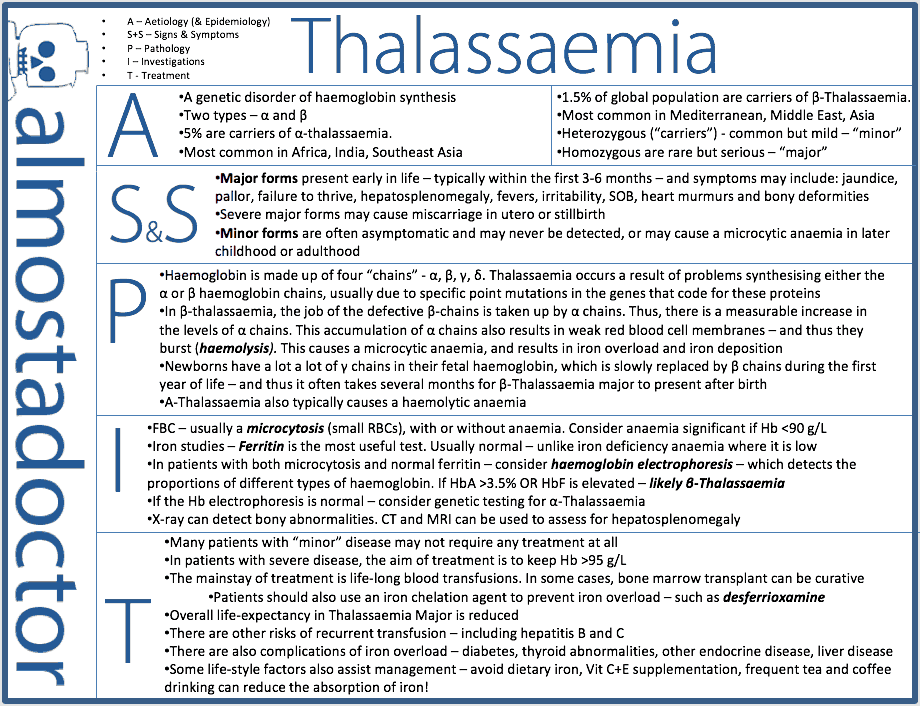