This article “Understanding ECGs” is part of the almostadoctor ECG series. It provides a basic introduction to ECG waveform, and the practicalities of performing an ECG.  Once you understand the basics of ECG Interpretation, you can move onto ECG Abnormalities and Summary of ECG Abnormalities.

There are 300 large squares per minute. So, if a QRS occurs once every large square, the HR is 300/min. However, if they occur once only 4 squares, the heart rate is 300/4 = 75bpm. When you work this out, you say you are doing the R-R interval.

Be aware that in very fast heart rates, this scale can be altered to aid the ECG interpretation. An ECG printout should confirm the scale in the corner of the paper 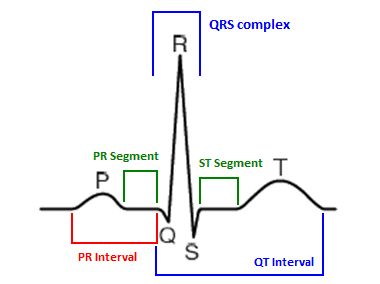 This term is used to refer to a part of the ECG between the end of one wave and the start of the next. The two main segments are the PR segment and the ST segment.

This term is more ambiguous and refers to various stretches of the ECG:

Normally you take a ‘12-lead ECG’. This term is confusing because the word ‘lead’ has two meanings.

It is important to attach your electrodes in the right place so they you get signals that can be properly interpreted.

The height of the complexes can be important in defining certain conditions. Thus it is important that the reader is calibrated correctly so we can interpret the wave height. A signal of 1mV should cause the graph to rise 1cm (2 large squares). At the start of each ECG trace, this calibration signal should be seen on the print out.

You should connect the electrodes in the following order:

Note that the colouring scheme of leads varies (usually by country).

You might wonder how the LA can operate as both a negative and a positive electrode simultaneously. Well so do I! I guess these voltages are relative, so it is relatively more positive than the Right arm, whilst still being more negative than the left leg. Also note that the ‘inferior’ plane leads are viewing the heart from below, and thus looking at the diaphragmatic surface, which consists mainly of the left ventricle.

*although the view is pretty non-specific Some people find Einthoven’s triangle helpful in understanding the leads:

These account for the other 6 leads of the 12-lead ECG. Each of the electrodes is positive.

*note that this consists mainly of the right ventricle You may notice that the Right Leg electrode is not mentioned, and this is because it is a NEUTRAL electrode, and thus not utilised in the measurements themselves.

When the ECG graph is drawn, there is a positive line when the signal travels towards a particular lead, and a negative one, when the signal travels away from a lead. Depolarisation spreads throughout the heart in many directions at once, but the wave produced is the average of this. When the R wave is greater than the S wave, this means the signal is generally positive, and therefore moving towards the lead. When the S wave is greater than the R wave, it means the signal is negative and moving away from the lead. When the depolarisation wave is moving at right angles to the lead, then R and S waves will be of equal size. Imagine looking at the heart from the front. From here, the waves of depolarisation generally spread through the heart from 11 o’clock to 5 o’clock. This direction of spread of the signal is known as the cardiac axis. Therefore, they head along lead II. This creates a nice positive R wave in lead II. aVR however has its positive and negative electrodes the other way around, and so the signal travels against this lead, and thus there is a negative signal produced in this lead. 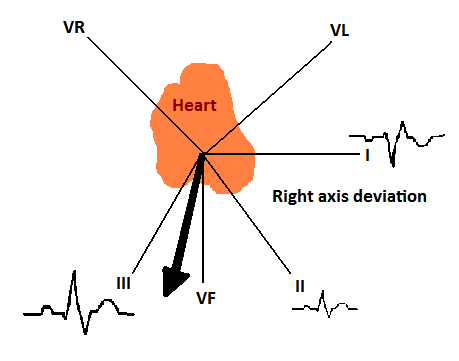 You can determine the direction of the cardiac axis (to check if it is normal or not) by looking at leads I-III. A normal cardiac axis will cause a positive signal in all 3 of these leads – because between them these leads measure the lateral (right to left) and inferior dimensions – and the signal is travelling laterally and inferiorly! The deflection is greatest in lead II because this lead measure both laterally and inferiorly. However, in right ventricular hypertrophy the cardiac axis becomes displaced. The overall direction of charge is now from 1-7 o’clock, because there is extra muscle, and therefore extra signal strength on the right side of the heart. This alters the signal, such that lead I will display a negative QRS, and lead III will now have the tallest QRS (not lead II). This axis shift is called right axis deviation. It is associated mainly with pulmonary conditions that put a strain on the heart. Left ventricular hypertrophy can also cause an axis deviation. We call this left axis deviation. In this, the lead I signal will become very weak, whilst leads II and III will become negative. This is often a result of a conduction defect rather than left ventricular hypertrophy. Basically, the cardiac axis points to any where the R is larger than the S, and points away from any lead where the S is larger than the R. however, it is unlikely that it will point directly towards any of the leads, and thus you only have an approximation – thus this is why it is useful to have several leads!  Where R and S are of equal size, the cardiac axis is at 90’ to that particular lead. Deviations in the cardiac axis may not themselves be significant – they can occur in normal people (often if they are very tall, or very thin or fat). However, they prompt you to look for other things. Also remember; right axis deviation is often a result of right ventricular hypertrophy (due to pulmonary disease) but in left axis deviation the most likely cause is NOT hypertrophy, but a conduction blockage.

QRS in the V leads

There is more muscle on the left than the right – therefore the ECG trace is biased towards the left of the heart. This means that for leads looking at the right of the heart, and to some extent at the septum, the overall flow of charge, is away from these leads – thus leading to a negative QRS. The general rule is that V1 and V2 have a negative QRS, V3 and V4 have roughly equal sized R and S waves, and V5 and V6 have a positive QRS The point where R and S waves are equal indicates the site of the septum – it is called the transition point. Looking at these allows you to determine of there is right ventricular hypertrophy – because if there is, then the transition point will not appear in lead V3/V4, but instead may appear in V5/V6, as the enlarged ventricle shifts the septum to the left.

Should I be worried about Coronavirus?