Developmental Dysplasia of the Hip

Developmental dysplasia of the hip (DDH, formerly known as congenital dislocation of the hip) describes any abnormality found in the neonatal hip joint. The degree of abnormality varies considerably. The problem may arise from structural defects in the head of the femur, the acetabulum or surrounding structures. Approximately 1 in 100 births are affected and it is more common in the left hip.

It is not always detectable at birth.

Most cases can be treated conservatively with braces (usually a Pavlik Harness) or in some cases, casting. It is associated with an increased risk of need for hip replacement in adulthood.

Many risk factors are indicated in DDH. Previously, all babies with any risk factor were screened in the UK. However, only babies who are breech presentation or those who have a positive family history are now screened as these have been identified as the most significant risk factors. Other risk factors include oligohydramnios (reduced amniotic fluid volume), firstborn babies, race (high in Native Americans) and gender (80% of cases are female).
Diagnosis is suggested during newborn checks that all babies receive before leaving the hospital. It can only be confirmed on ultrasound.

Screening is part of the newborn examination and the 6-8 week “baby check”.

Examination of the hips in a newborn

Most hips the are unstable at birth will stabilise by 6 weeks of age. Any hip instability after this age requires definitive management. Hip dislocation at birth requires immediate management.
The most common treatment for DDH is the use of a Pavlik harness. 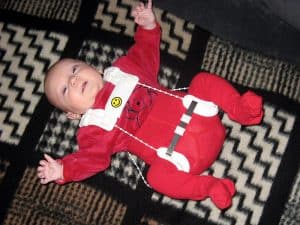 Baby wearing a Pavlik Harness. This file is taken from wikimedia commons and is licensed under the Creative Commons Attribution-Share Alike 3.0 Unported license.

The Pavlik harness holds the child’s legs in an abducted position with the hip flexed (much like Ortolani’s). The child is able to further flex or abduct the hip but adduction and hip extension are limited. The harness must be worn continuously for at least 6 weeks.
In children over 6 months of age the harness is not indicated and surgical reduction may be required. If DDH is left untreated there is a high risk of early onset osteoarthritis.
Mild DDH