Osteoarthritis is a condition that results from the loss of cartilage at synovial joints, and is often accompanied by degeneration of the underlying bone.

Radiologically there can be visible:

It is 75% water, and the rest is mainly collagen (type II), mixed in with chondrocytes, fibroblasts and proteoglycans. Cartilage is smooth and can absorb impact. It is constantly damaged in normal use, but this is repaired by chondrocytes. This damage and repair is a balanced process in normal function. Chondrocytes are found throughout the cartilage itself – and along with fibroblasts, are the only cells found in cartilage.
In OA, this balance between damage and repair is lost. There is chondrocytes proliferation, and excess cartilage is produced, however, it is oedematous. This leads to focal erosions forming. This leads to rapid destruction of the cartilage, for which, the chondrocytes cannot compensate, and later in the progression of the disease the chondrocytes die, through apoptosis.
Adjacent areas of cartilage try to take over the role of repair, but this is inadequate.
Eventually, the synthesis of new matrix stops completely. The surface becomes fistulated and fibrillated.
Now the bone has lost its protection, it is exposed to extra stressors. The two bones of a joint may rub directly against eachother.  There may be microfractures, and cyst formation.
The bone attempts to re-grow itself, but this process can be too great, and it results in the formation of osteophytes. 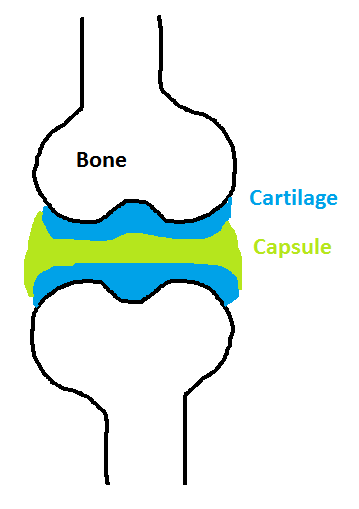 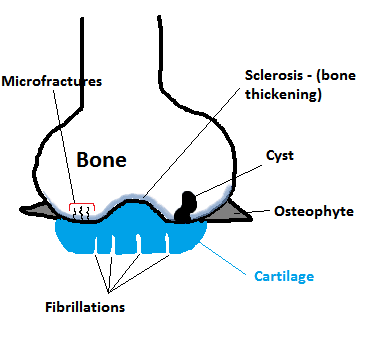 Osteoarthritis is progressive disease. This can be gradual, or stepwise. In some very rare cases, radiological improvement has been seen. This could be the basis for future treatments.

Can affect most joints, and there are lots of different patterns. Disability results when knee and hip joints are affected.

OA can be classified by cause, or presentation.

Primary
i.e. idiopathic – there is no underlying cause. Genetic factors likely to be involved.
Secondary
Likely to be the result of another underlying disease process or event. E.g.:

Other types of Hand OA

Course of the disease

Joint pain and stiffness ≫ joint destruction ≫ joint replacement
The disease typically progresses slowly, although some patients can remain stable for years. Even with early intervention, up to 65% of patients will show deterioration 15 years after diagnosis.

Initial treatment should be around ‘self-help’, such as exercise and life-style changes.
Physio and exercise are particularly important in lower limb OA, especially so for the knee. Increasing quadriceps strength helps knee stability.
Hydrotherapy may be useful in lower limb OA. Massage and heat & ice packs are often useful.
NSAID’s are debateable – many patients take them, but the proven benefit is marginal, if any. Have been associated with avascular necrosis and destructive arthropathy.
Weight reduction is helpful in those with BMI >28
In patella-femoral OA, performing a patellar tap can relieve symptoms!

TENS and acupuncture have been shown to be beneficial to some patients.
Pain relief
Is important to help function.
Steroids
Despite the fact that OA is usually not inflammatory, local injections of steroids during severe exacerbations are often helpful. Do not do this more than twice a year. This is particularly useful when there is joint effusion.
Other treatments

Used widely in severe disease. Only really used for hip and knee joints. very good outcomes in those whose disease is not well controlled with physical and pharmacological intervention. Also can greatly reduce functional deficits. The risk of complications is equal in both (about 1%). For the vast majority of patients pain is greatly reduced, and function greatly increased, after joint replacement.
Hip replacement
Consent
Knee Surgery 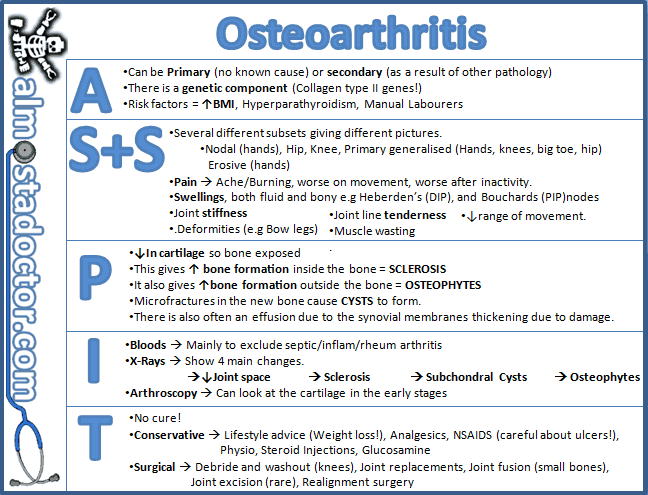