The exact cause is unknown, however as with most autoimmune disorders, there does seem to be a genetic link.

Although some symptoms are more predominant than others, Myasthenia Gravis generally has a course which has periods of remission, interrupted by ‘Crises’. Some patients can predict when they are ‘due a crisis’, and others find there is no pattern whatsoever.
Due to the destruction of the synapse there is decreased conduction at the neuromuscular junctions, leading to muscle fatigue and weakness. There are four sets of muscles that are particularly affected

The fatigability of muscles can be demonstrated by getting the patient to do a repetitive movement (e.g flap their arm’s) for 30-60 seconds. They also report that their symptoms get worse as the day wears on, and that their best times are in the morning, or after a sleep.

Limb reflexes are usually normal or brisk, and there are no sensory abnormalities.

Muscle wasting is usually not present, unless there is severe disease, or the patient has had the condition for a long time.

Although Myasthenia Gravis (as the name suggests!) used to be a life threatening condition due to respiratory failure, with treatment a normal life expectancy can be achieved. Patients do have to be aware about the association with the development of thymomas, as this can have a large impact on both morbidity and mortality. 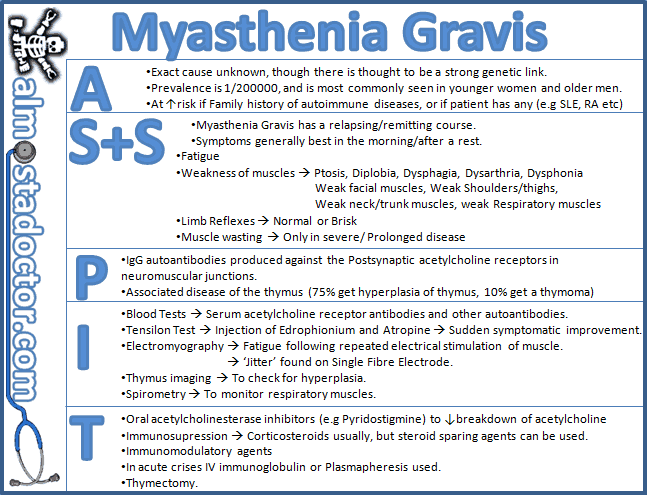