The anion gap is a tool used to:

In a metabolic acidosis the anion gap is usually either ‘Normal’ or ‘High’. In rare cases it can be ‘low’, usually due to hypoalbuminaemia.

An ABG machine will often give a print out of the anion gap, but it can also be useful to know how it is calculated.

There are usually more measurable cations than anions, and thus a normal anion gap is value is positive.

A normal value is 3-16, but may vary slightly depending on the technique used by the local laboratory.

If the anion gap is <30, then there may not be ‘true’ high anion gap metabolic acidosis.

In a healthy individual, the main unmeasured anions are albumin  and phosphate. Almost all of the ‘gap’ can be attributed to albumin. This means that in patients with hypoalbuminaemia and metabolic acidosis, there may be a normal anion gap. Be wary in severely unwell patients because they often have a low albumin. You can adjust for this in your calculation. Corrected anion gap:

In an unwell patient with a high anion gap metabolic acidosis (HAGMA) the anion gap is increased due to: 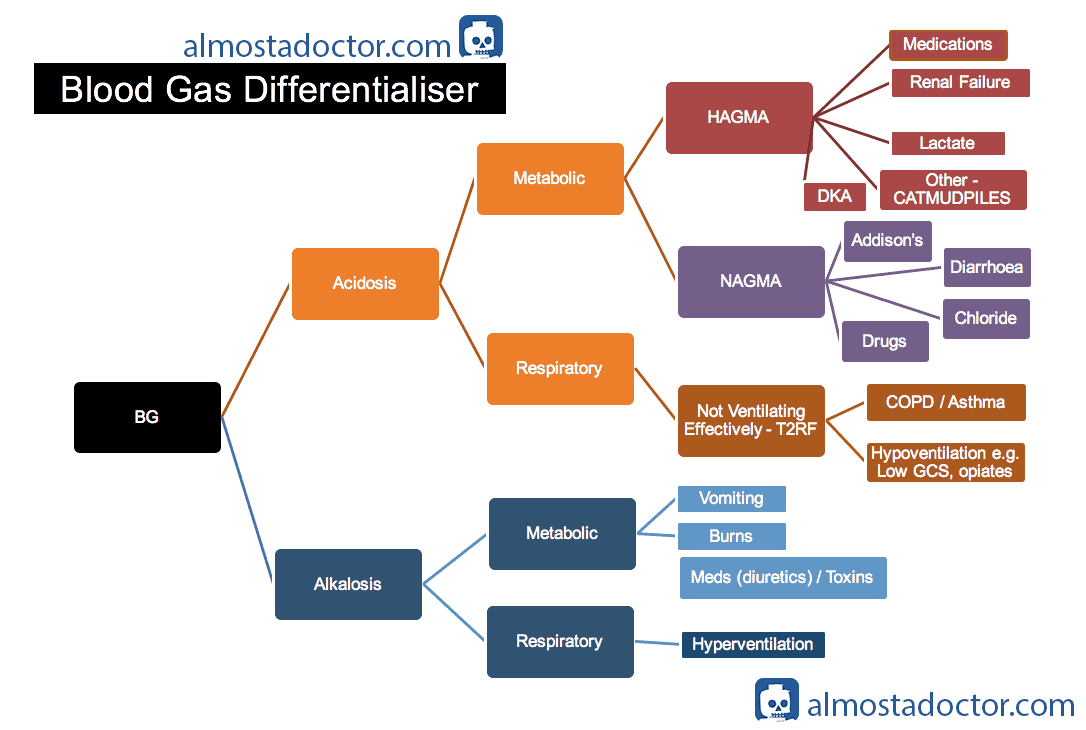 Causes of metabolic acidosis and alkalosis

There are lots of mnemonics for remembering the causes. I’ve included three below, but my favourite is ‘KARMEL’ as it isn’t too long! CAT MUDPILES is the most extensive and quoted in the literature.

In DKA, there is loss of bicarbonate from the kidney, due to altered kidney metabolism, secondary to the DKA. However, there is also extracellular fluid volume depletion. And thus, the HCO3concentration may be only marginally reduced, whilst the actual base deficit is much larger.

In DKA, there is impaired metabolism of ketones which usually occurs by the brain and kidney, secondary to raised levels of insulin. This is contrary to the common belief that the main cause of raised ketones is due to overproduction as a results of altered metabolism, due to lack of glucose within cells.

Severely ill patients (particularly those with DKA) may require intubation due to severely decreased conscious levels. However, intubation and ventilation should be done with caution, because it can worsen acidosis.

If we image the bicarbonate buffering system:

We can see that in severe acidosis, hyperventilation may occur as a response to managing high [H+]. As carbon dioxide is expelled via the lungs, the equilibrium shifts to the left, and the [H+] is lowered. However, this also reduces the [HCO3–].

Thus, in a newly intubated patient, care must be taken to match the ventilator settings to the patient’s prior ventilation to ensure that worsening acidosis does not occur.

There is also an argument for the use of therapeutic bicarbonate in these patients, to help improve their acidosis, but the evidence is poor. If you imagine adding more bicarbonate into the above equation, it will shift the equilibrium to the left again, but ONLY if there is capacity (of the lungs – vie hyperventilation) to reduce the CO2 concentration. Thus, in an already heavily hyperventilating patient, this is often not of benefit.

Causes of NAGMA tend to be more predictable and less obscure. NAGMA is typically due to a loss of bicarbonate, which is then subsequently replaced in plasma by chloride, and thus the overall anion concentration remains stable. Thus, most cases are a hyperchloraemic acidosis.