All blood cells develop from haemocytoblasts
The process is called haematopoiesis (sometimes just haemopoiesis)
Haemocytoblasts are also known as pluripotential stem cells. These cells can replicate themselves as well as differentiate into other cells, thus providing the constant supply of blood cells.
The turnover of cells is very quick:
As well as these three constituents, blood also contains plasma. Plasma is the liquid component of blood, including fibrinogen. Serum is plasma, without the fibrinogen (i.e plasma after clot formation has occurred)
Approximately 1013 new myeloid cells (all blood cells excluding lymphocytes) are produced each day.
Although the liver and spleen produce blood cells during gestation (from about 6 weeks to 7 months), the bone marrow is the only place production can occur in adults and children.
Throughout production of the cells, the cells need to receive various growth factors at the right stage in their development. Cells at different stages of development will express different surface receptors for the different growth factors. These factors include IL-3, IL-6, IL-7, IL-11, SCF (stem cell factor). There are also some factors that inhibit growth, to keep it under control, these include TNF, TGF-β.

This occurs entirely in the red bone marrow. Red marrow can be found in vertebrae, ribs, skull, sternum, scapula, and proximal ends of the limb bones (known as the trabecular area). Red marrow is also known as myeloid tissue. It is not generally found in other areas of the long limb bones; which are instead filled with fatty yellow marrow. However, during extreme times, the marrow in these areas can switch to become red marrow. During childhood, red marrow is far more extensive.

The production of cells is as follows:

This takes place in mainly in the spleen. Macrophages will recognise and destroy about 90% of old RBC’s before they rupture and release their products into the blood (haemolyse).
These cells will also recognise and phagocytose free haemoglobin. The Hb has to be phagocytosed for it to be recycled!
In the spleen, there is red pulp which contains blood vessels of a very small diameter (about 3μm). RBC’s have a diameter of about 8μm; thus the RBC’s have to bend to fir through these capillaries. Thus, the old ‘weak’ ones are likely to break, and thus be phagocytosed

The body requires an average of 1mg iron per day from the diet. this can be slightly higher for women (1.3-1.7g) as on average, they lose more through menstruation. The body will naturally excrete about 0.6mg iron per day.
The body actually requires 20mg of iron per day, but recycles its own, and thus only need to take in about 1mg per day
Absorption from the small intestine is incredibly slow. No matter how much you eat, you can only absorb about 2-3mg per day
Pregnancy (particularly in the last trimester) is a very large drain on a woman’s iron reserves. It can lead to iron deficiency anaemia
Iron can exists in two forms – ferrous (Fe2+) and ferric (Fe3+) – only ferrous iron can be absorbed by the small intestine. Thus, stomach exists creates the conditions for iron to exist in its ferrous form.

What do we need iron for?

Haemoglobin synthesis takes place in the mitochondria of the developing RBC. The major rate limiting step is the conversion of glycine and succinic acid to ALA, by the molecules ALA synthase. Vitamin B6 is a co-enzyme for this reaction.
Haemoglobin consists of 4 globin chains around 4 heme molecules. There are four types of globin chain:
These go together in different combination, to make three types of haemoglobin:
The affinity of Hb for oxygen changes with O2 concentration (amongst other things), and thus, Hb has a high affinity for oxygen when [O2] is high (in the lungs), and a low affinity for oxygen when [o2] is low (at the capillaries). 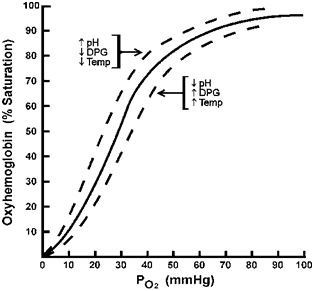 Note that low pH reduces the affinity of Hb for O2. Thus when pH is low, O2 is more likely to be released – imagine it like – when there is lots of CO2 (thus low pH), then the tissue is likely to have high metabolism, thus needs more oxygen, thus the Hb is more likely to release the oxygen.
Haemoglobin can exist in two formations; T & R. these letters stand for taut and relaxed. Deoxygenated Hb is T, and oxygenated Hb is R. this is significant because the Hb molecule alters its affinity for oxygen with the number of oxygen molecules already bound to it. This creates the shape of the oxygen dissociation curve.

These also develop from myeloid stem cells, however, in this case these stem cells will grow to become massive, before finally breaking up to form platelets.
Platelet development is stimulated by TPO – thrombopoietin. Like EPO, TPO is produced by the liver and kidneys.

These are traditionally divided into two types; granulocytes and agranulocytes. They are so called because when using a microscope, the granulocytes have visible ‘granules’ (actually secretory veiscles and lysosomes), and the agranulocytes have much smaller (and therefore harder to see) vesicles.
Granulocytes and monocytes are non-specific defence cells, attacking pretty much all pathogens, whilst lymphocytes are specific to one particular pathogen.
Generally, WBC’s do not spend much of their lifetime in the bloodstream. They use it to get from one organ to another – to find the pathogen.

Account for 70% of circulating WBC’s. they have a very dense, segmented nucleus, with 2-5 lobes. As a result, these cells are referred to as polymorphonuclear leukocytes, or polymorphs. Their cytoplasm is packed with lysosomal enzymes, and bactericidal substances.
They are often the first WBC’s to ‘arrive at the scene’ of an infection, and will attack substances that have been marked by complement.
They will engulf bacteria and ingest it, in the process releasing superoxide anions, and hydrogen peroxide. Whilst this process is going on, the neutrophils will release cytokines, prostaglandins and leukotrienes. The prostaglandins increase vascular permeability in the area, thus aiding inflammation, whilst the other chemicals attract other cells to the site.
Neutrophils only last about 10 hours in the bloodstream. They will only last about 30 minutes whilst actively engulfing bacteria. The neutrophils will die after engulfing about 25 bacteria.

Account for 2-4% of circulating WBC’s. they are similar in size to neutrophils, but always have a bilobed nucleus and deep red, obvious granules. They attack pathogens that have been marked by antibodies. They are capable of engulfing bacteria, but their main attack is through the release of toxic compounds. Thus, they are particularly useful against multicellular parasites. These are the cells responsible for an allergic reaction – because they are sensitive to allergens.

Have loads of granules that stain very darkly with various dyes. They are slightly smaller than eosinophils and neutrophils. They account for less than 1% of circulating WBC’s. they migrate to inflamed areas, where they discharge their granules, releasing heparin and histamine into the interstitial space. They enhance the local inflammation that has already been started by mast cells. they also release chemotaxic agents to attract eosinophils and other basophils.

Are spherical, and larger than neutrophils and eosinophils, and approximately twice as big as basophils. The nucleus is large and tends to be oval or kidney bean shaped. They account for 2-8% of circulating WBC’s. they use the blood mainly for transportation, and remain in the blood only for a maximum of 24 hours, before migrating to tissues to become macrophages. Macrophages are aggressively phagocytotic. They also release chemotaxic agents for pretty much all other WBC’s. they also release agents that are chemotaxic for fibroblasts, thus attracting fibroblasts to the area to begin forming scar tissue.

Are slightly larger than RBC’s and do not generally contain visible granules. They generally have a large round nucleus, and a ‘halo’ of cytoplasm. They account for 20-30% of the circulating WBC’s. they migrate from the blood to peripheral tissues, and are then able to migrate back to the blood again. Circulating lymphocytes represent only a tiny fraction of the total amount of lymphocytes, as a very large proportion are in your peripheral tissues and lymphatic system.
There are 3 types of lymphocyte, but these cannot be distinguished by light microscope.

All WBC’s except lymphocytes will mature in the bone marrow. Lymphocytes are discussed separately below.
There are various factors produced that stimulate the differentiation of the progenitor cell.

Haemocytoblasts will develop directly into lymphoid stem cells (lymphoid progenitor cells) which are distinctly different from the progenitor cells that go on to form all other types of blood cell (see diagram below).
The thymus produces various factors that affect the differentiation of lymphocytes. They also develop in response to the presence of various antigens.

Other general Properties of blood

Should I be worried about Coronavirus?