Every haem molecule will produce one molecule of bilirubin.
These molecules are found in haemoglobin and myoglobin. Also, cytochrome enzymes will also produce one molecule of bilirubin.
The production of bilirubin from haem occurs mainly in the spleen (macrophages) and liver (Kupfer cells), but also all over the body by macrophages, and in renal tubular cells. The cells that perform this job are known collectively as the reticuloendothelial system.
In situations where the liver cannot excrete conjugated bilirubin, the kidneys will take over this job, however once plasma concentrations are high enough (above 600µmol/L) – the kidneys cannot conjugate bilirubin –  only excrete it after this process has occurred.
Bilirubin that is deconjugated by bacteria in the gut will be reabsorbed in the colon. This process is more likely in the presence of increased bile-acids – i.e. when there is bile acid malabsorption. Bile acid malabsorption occurs in cases of intestinal disease and resection. in these patients, as a compensatory mechanism, the body excretes higher concentrations of bile salts, and this increases the risk of gallstones.
More bilirubin is also re-absorbed during fasting.
Much of the bilirubin in the colon will also be turned into stercobilogens and urobilogens. Generally, urobilogens is colourless, and stercobilogens give faeces its colour.
Some of the urobilogens will be absorbed and enter the circulation, where they will be removed mainly by the liver, but also by the kidney.
In liver disease and excessive haemolysis, the liver may not be able to remove all excess urobilogens, and so more is removed by the kidney.
Note that bilirubin will oxidise back to biliverdin after excretion – hence the green colour of bile. 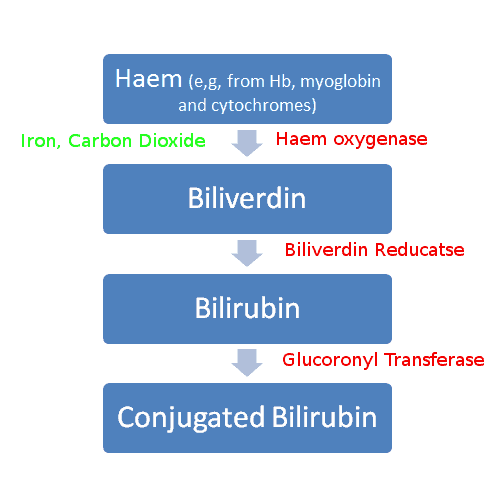 This is a condition where there is yellowing of the skin, sclera and mucous membranes as a result of increased bilirubin concentration in bodily fluids.
Normal bilirubin level is 1-20 µmol/l
It is usually detectable when bilirubin concentrations reach 50µmol/L
Jaundice is the clinical sign of hyperbilirubinaemia. It indicates disease of the liver or biliary tree.
Jaundice will first be visible in the sclera, and more subtly in the skin. Urine is also likely to be dark. Sputum and saliva are not affected. Occasionally, carotenemia may mimic jaundice (usually caused by eating too many carrots or vitamin A), however, the yellowness is usually more visible in the palms than the sclera if this is the case.

Win a free copy of the almostadoctor app!