This article contains a bit of background info about normal child development. For info on milestones, please see:

Most developmental abnormalities present within the first 5 years of life. During this period there is rapid development of motor ability, speech and language, communication and cognitive skills. After this age, development is mainly just cognitive.

It is now generally believed that:
The only area we can really have much influence over is the environment (although gene therapy may change this in the future!)
Environmental needs are different in children of different age groups
There are four main areas of child development:

These should be present in neonates, and typically disappear between 4-6 months of age:

Typical ideas and beliefs in the pre-school child are sometimes called pre-operational thought, and include:

In adolescence, the adult pattern of thought emerges. This is called formal operational thought. This allows reasoning behaviours and abstract concepts.

Is widely used and often quoted to describe the degree to which a disease affects cognitive functioning. It can be a very useful test, but does have some notable drawbacks:
In children, particularly young children, testing is typically performed with: 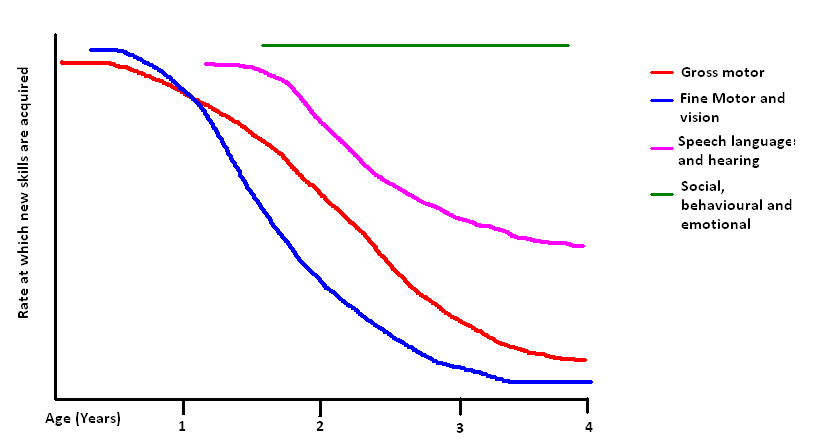 There are loads of specific tests for loads of different areas. You are unlikely to have to know many of them, unless you become a specialist in child development!
For purposes on the ward / in a general clinic, details are given below:

Official visual testing is carried out in pre-school children (age 4-5) by optometrists. If there are any parental concerns, it can be tested before this. Normal visual development includes: