Disclaimer: R-CPD is not yet a widely recognised condition. Unlike most other articles on almostadoctor, there is not a large evidence base to back-up the recognition and treatment of this disorder. As a newly described disorder, many of the facts and features are not yet fully understood, nor treatments proven. However, as the author is a sufferer of this disorder, he wishes to educate current and future medical practitioners about the condition in a bid that it may become more widely recognised and treated. To learn more, you can read the blog post about his experiences of living with the condition.

Retrograde Cricopharyngeus Dysfunction (R-CPD) describes a disorder where the cricophayrngeus muscle (sometimes referred to as the Upper Oesophageal Sphincter) fails to relax to allow the upward passage of gas, and thus results in an inability to burp (belch).

It is typically present from an early childhood age, but presents in early adulthood (families may or may not recall an ability to burp as an infant). Symptoms can vary from mild to incapacitating, and may include chest and epigastric pain, excessive bloating and flatulence, gastro-oesophageal reflux, loud gurgling sounds heard from the chest and neck and sensations of pressure in the neck and chest.

Current recommended treatment is a botox injection into the cricopharynxgeus muscle. Anecdotally, many patients also report that neck muscle strengthening exercises over several weeks can help them to develop the ability to burp. Once the ability to burp is achieved from either method, symptoms resolve. The efficacy of the botox treatment in most patients appears to be much longer the duration of action of botox itself.

The cricopharyngeus muscle lies around the top of the oesophagus, and arises from the cricoid cartilage, and attaches to the posterior medial line of the pharynx. The lower part of the muscle is continuous with the fibres of the oesophagus.

It it sometimes described as the “lower part” of the inferior pharyngeal constrictor muscle.

The muscle is not under conscious control. On swallowing, relaxation is initiated by the arrived of a food bolus into the pharynx. This is known as the anterograde action.

On the action of belching, pressure in the upper oesophagus should cause relaxation to allow the gas bolus to be released. This is known as the retrograde action. 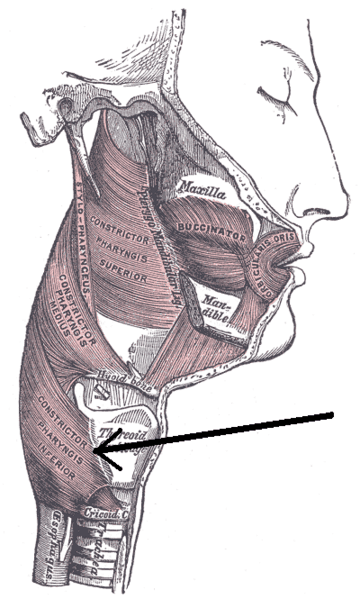 Patients with the condition are described as ‘miserable’. In many cases it may be mild, but in those presenting to General Practice, ENT or gastroenterology, symptoms are usually more severe. Patients describe:

Consider referring patients to ENT for suspected R-CPD when all four of 4 of the following are present:

Be wary of diagnosing either of the above conditions in a patient who describes an inability to burp, as it is the inability to burp that is possibly the (treatable) cause. Treatments for GORD and IBS will typically be ineffective if trialled. 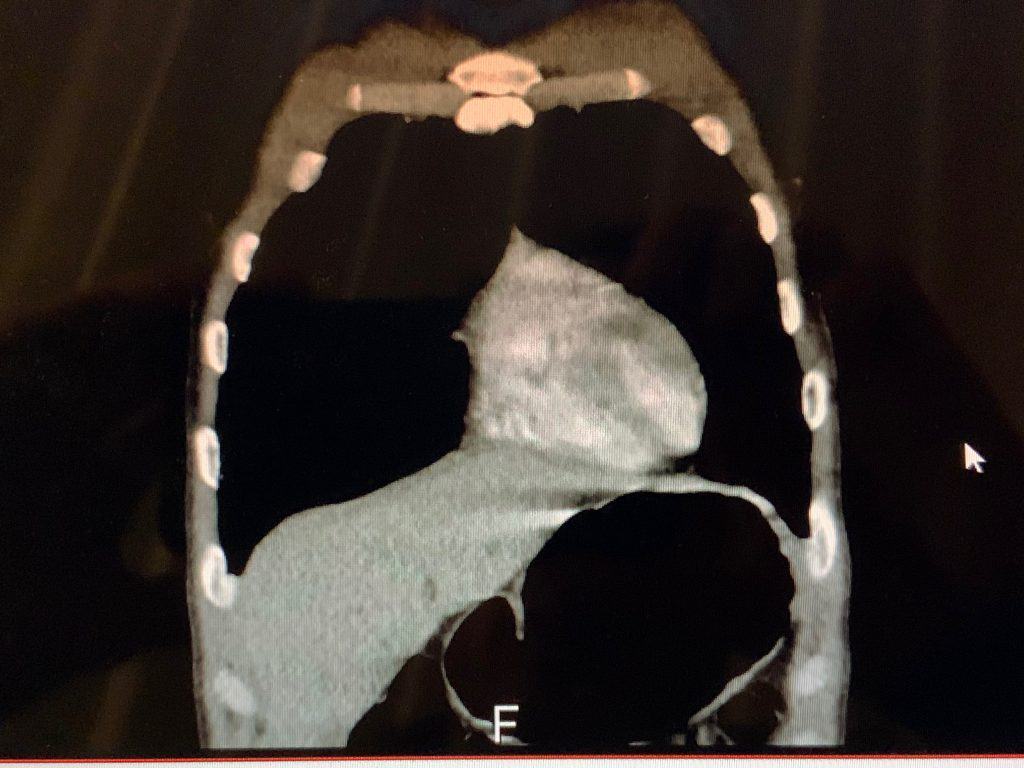 CT scan showing a large gastric gas bubble, which along with history, is suggestive, but not diagnostic of R-CPD

There is a single, small, single centre published study describing the use of botox to treat the disorder.

An alternative method of injection into the cricopharygeus exists. This is performed percutaneously, usually with EMG guidance, and can be performed on an awake patient. It it appears this method may be less effective.

A more permanent solution is a laser myotomy (irreversible), which should be reserved for resistant cases.

Many patients report anecdotally that neck strengthening exercises have given them the ability to burp (no proven published evidence).

There is a large online community of “no burpers” on reddit. You may wish to refer patients here to discuss their experiences with others.