Gastro-intestinal reflux disease (GORD) is a condition characterised by retrosternal, and sometimes epigastric pain, as a result of reflux of the acidic contents of the stomach into the oesophagus.

In the acute presentation it may be difficult to differentiate GORD from the symptoms of MI and other symptoms of acute chest pain.
Occasional feelings of ‘heartburn’ (dyspepsia) are normal. Acid reflux will cause peristaltic contraction of the oesophagus and alkaline saliva secretion, and normally this will cause the symptoms to go away.
It is only when pathological changes have occurred that allow gastric contents to be in prolonged contact with the oesophagus that we would call it GORD.

In GORD acidic stomach contents will spill out of the stomach and back up the oesophagus. The presence of a hiatus hernia increases the risk, but not everyone with a hiatus hernia gets GORD.There will usually be a problem with the lower oesophageal sphincter (LOS) whereby it doesn’t contract normally. Certain foods make the sphincter less likely to contract. There is also often decreased gastric emptying.
The oesophagus may become inflamed, reddened and ulcerated, although the level of tissue damage is not related to the severity of symptoms. In some cases, the normal squamous epithelium may be replaced by a columnar epithelium, similar to that found in the stomach. This is known as Barrett’s oesophagus.

Treatment typically consists of lifestyle advice, ant-acids and proton pump inhibitors (PPIs). It is important in patients with persistent symptoms to investigate for an underlying cause (e.g. helicobacter pylori, stricture) – which usually involves h. pylori testing and / or endoscopy.

There are several mechanisms by which GORD can occur:

In patients under 65 with no red flag symptoms, diagnosis is usually clinical. In patients whose symptoms failed to respond to standard treatments (lifestyle changes, antacids, and PPIs) then further investigations should be performed to look for an underlying cause (e.g. H. pylori, peptic ulcer stricture). These might include:

Upon endoscopy, the oesophagus can appear anything from slightly reddened, to severely ulcerated. Remember however, that this poorly correlates to symptoms, and some people with severe symptoms may have perfectly normal endoscopy and histology.
Exposure of the patient’s oesophagus to the contents of the stomach will usually lead to inflammation and desquamation. The reflux causes the loss of many of the mucosal cells. thus the mucosa contains a higher proportion of immature cells. this is known as basal cell hyperplasia. There is also invasion of the area by inflammatory cells.
o   When the reflux is severe, cell proliferation cannot keep up with the rate of desquamation, and ulceration will occur. These ulcers can be a source of blood loss, and in some cases they can even perforate.
The ulcer can heal by a process of fibrosis and epithelial regeneration, but in the area of fibrosis, a stricture may occur.
In many people, the epithelial regeneration will be that of normal squamous cells, but in some people, the regeneration of cells will result in a columnar epithelium replacing the squamous one. This is known as Barrett’s oesophagus.
Barrett’s Oesophagus is a major complication of GORD. Many GORD patient’s will suffer from some degree of it.
Anaemia – this can result from chronic bleeding due to long term oesophagitis. This is especially common in patients with hiatus hernia. However, it is very important to remember other causes of iron deficiency anaemia as a result of blood loss .You mustn’t diagnose GORD as the cause without also investigating the possibility of colorectal bleeding, even in the presence of a hiatus hernia and oesophagitis.
Benign oesophageal stricture – these develop as a consequence of fibrosis due to long standing oesophagitis. They present with dysphagia that is worse for solids than liquids. After eating meat, there may be a bolus obstruction that causes complete dysphagia.Heartburn may also be present although it isn’t always. This condition is diagnosed by endoscopy, and biopsies are normally taken to exclude malignancy. The patient should be put on PPI’s and be educated on the need to chew food thoroughly. As patients are often elderly, and examination of sufficient dentition should be carried out.
Gastric volvulus – this is rare, but can be dangerous. It occurs when a hiatus hernia turns in upon itself and causes complete oesophageal gastric blockage. Patients will present with chest pain, vomiting and dysphagia. Most cases will spontaneously resolve, but they tend to recur, and surgery is advisable.
Webs – these are an out growing of the mucosal lining of the oesophagus. They will grow inwards into the lumen, and they look a little bit like a hymen. They are a common cause of dysphagia high up the oesophagus. You can break through them with an endoscope, and this will pretty much heal them. It may look a bit scary on endoscopy because there is blood, but actually, your endoscopy has been therapeutic!

Simple antacids – these are readily available, and patients often use them themselves:

Alginate-containing antacids – these available OTC and often used by patients before they come to see their doctor. You take 10ml 3x a day, and they will form a ‘foam-raft’ in the stomach on top of the gastric contents, which help to prevent reflux.
PPI’s – these will reduce acid secretion by up to 90%. An example is omeprazole – 40mg daily. After about 2 months of use, they can result in rebound increased acid secretion, which may last for around 2 months. If patients intend on using these for many years, then a lower does (e.g. 10mg) may be sufficient for maintenance.
Prokinetic agents – these can be helpful in some patients. They are usually dopamine antagonists, and they will increase the rate of gastric emptying due to increased peristalsis. Examples include metocloperamide and domperidone.
H. Pylori eradication – this seems to have little effect on symptoms of GORD, but is usually advisable to prevent other conditions (i.e. gastric ulcer and gastric neoplasm)
Symptoms will nearly always recur when PPI / antacids treatments are stopped. 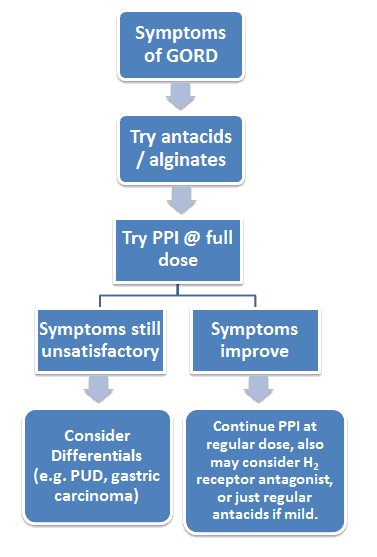 Surgery for GORD is usually a last resort. This is only used if the above treatments are in-effective. After several years on the above treatments, their effect may become lessened, and so surgery may be considered at such time. It is quite rare for patients to have surgery because most patients symptoms aren’t severe enough; they may interfere with quality of life slightly, but can be readily controlled by drug treatment.

The most common type of surgery is a Nissen fundoplication. It is performed laproscopically, however, in 2% of cases, during the operation, a laparotomy may have to be performed due to issues arising during surgery.  In this procedure, the fundus of the stomach (i.e. the top part) is wrapped around the bottom of the oesophagus and sewn in place. This means that when the stomach contracts, the bottom of the oesophagus is sealed off, and reflux is prevented. This type of surgery will also prevent a hiatus hernia, as the part of the stomach that may cause one of these is now sewn in place. This treatment will be beneficial in about 80% of cases.

Oesophagotomy – this is performed in cases with high grade dysplasia.

Other causes of oesophagitis