Tuberculosis (TB) is a chronic infectious disease, caused by Mycobacterium tuberculosis (MTB) of which there are three types that infect humans:

Tuberculosis is present in about 30% of the global population, but in developed countries it is rare since the advent of TB inoculation. Incidence in Australia is about 5-6 per 100 000 per year. Patients from developing countries, or remote indigenous communities within Australia are at much higher risk.

Infectious patients cough up large quantities of mycobacterium which can remain in the environment for a long period of time.

When MTB is encountered by the immune system, it is engulfed by macrophages, and these complexes form granulomas. These typically occur in the lungs, but the bacteria can also be carried to distant sites through the lymphatics, and granulomas can form at other sites. In most cases – up to about 80% – these granulomas heal and the infection is cured. In the majority of the remaining cases – about 90% –  the infection does not spread beyond the lungs, and becomes “latent” as it is kept under control within a granuloma by the host immune system. Latent TB is typically asymptomatic and may only present itself much later in life, and / or as a result of immunosuppression – thus becoming active TB.

Testing for TB depends on the stage of the disease:

Once identified, both latent and active TB should be treated. Multi-drug resistance (MDR TB) is common and treatment may often lasts for months or years on multiple antimicrobial agents, often with unpleasant side effects.

TB can cause a wide range of non-specific signs and symptoms, and as such, is often at the end of long lists of differentials!

Via droplet spread – only the pulmonary form is infectious
Usually needs sustained close contact with an infectious case.

Alternatively, if there is a failure of the above mechanism…
The bacteria may gain entry to the bloodstream can spread throughout the body and set up many foci of infection (tubercles) (e.g. miliary TB).This is extra-pulmonary TB 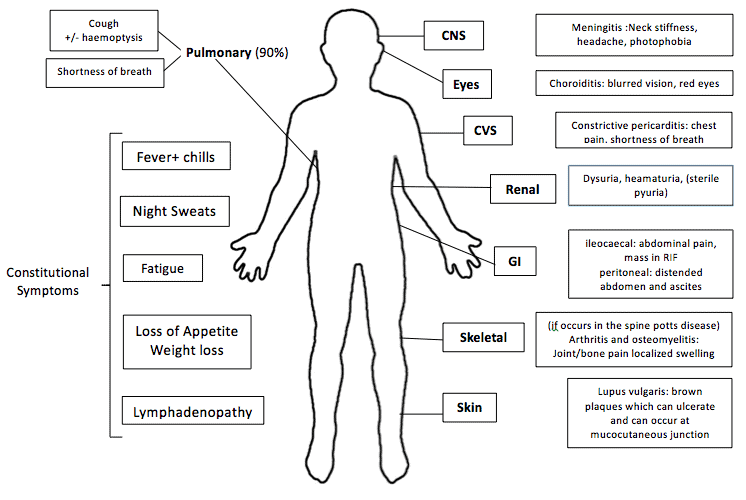 TB is often associated with a wide range of differential diagnoses. Some oft he more likely include:

Multi-drug resistant TB (MDR-TB)- can develop of TB is not properly treated.

*treatment should be started before culture results are back, and continued even if cultures are negative*

There are no agreed guidelines on whether TST or IGRA is the preferred method. Australian guidelines recommend the use of TST first line and IGRA if TST is not conclusive (or if previously vaccinated).

Local guidelines are variable and depend on the strains present in the local community. Treatment is recommended for most cases of latent TB and obviously all cases of active TB.

This is its own genus of bacteria (like G+ or G-). The group include TB and leprosy. They are acid fast. They are also aerobic.
Acid fast
This means that the organisms are difficult to stain using normal staining techniques. The name refers to the fact they can’t be stained by normal acid (ethanol) staining techniques. These bacteria are often particularly difficult to culture and identify; e.g. TB takes around 6-8 weeks