Can be divided into two types; Hodgkin’s and non-Hodgkin’s.
Lymphoid leukaemias also exist, and the distinction between these and leukaemia – especially chronic lymphocytic leukaemia – can be difficult.

There is some evidence linking this disease to mononucleosis infections. These are infection of the monocytes of the blood, and the term is an umbrella term, basically for EBV and CMV

The appearance of Hodgkin’s lymphoma – note the Reed-Sternberg cells 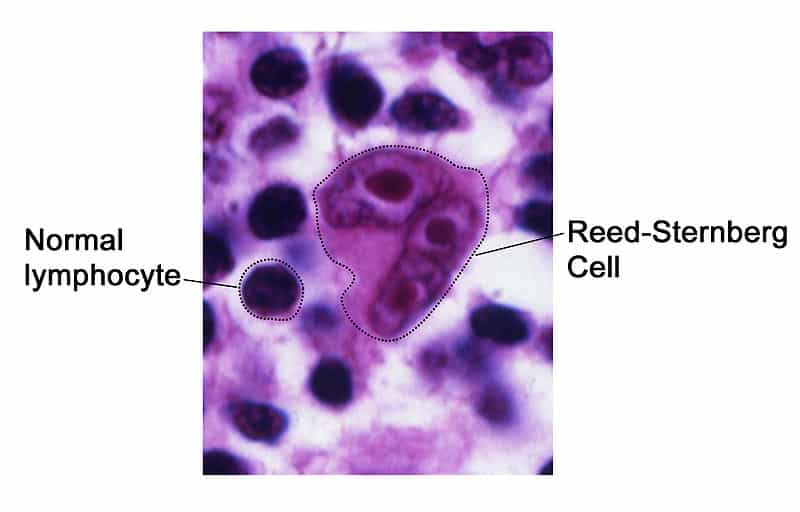 It is not totally clear how this occurs, however there are several factors involved:
The main points are that B cells no longer express Ig, and they no longer undergo apoptosis –so they become massive large cells, that no longer perform their original function.

Enlarged lymph nodes – these are usually rubbery, and most commonly found in the cervical region (70%) (usually supraclavicular region and neck). The nodes can fluctuate in size.

Enlarged spleen/liver – this can be present, but remember it may not be indicative of the lymphoma!
B symptoms – fever (25%), drenching night sweats, weight loss of >10% body weight
Other vague symptoms – pruritis (itch), fatigue, anorexia, alcohol induced pain at the site of the lymph nodes
Symptoms due to the involvement of other organs – e.g. if the lung become involved there may be breathlessness and cough

HL is usually classified using the Ann Arbor classification:
Curative treatment is almost always recommended, and often successful.
Early stage treatment – stages IA and IIA
The treatment of choice is irradiation with/without chemotherapy (often with a small dose of chemo). Usually women’s fertility is preserved due to short, targeted bursts of radiation (‘ extended megavoltage field radiation’)
The type of chemotherapy used is ABVD. This stands for the drugs used: (typical regimen);
The chemotherapy is typically given in 4 week cycles, with the drugs being given IV on days 1 and 15. It is usually an outpatient procedure to give the therapy.

This is curable in the majority of patients, and the median survival is longer than 5 years.
Women who receive any sort of chest irradiation during treatment for any stage of the disease should be put on a screening program for breast cancer.

Obviously these vary depending on the stage, but:
Other bits

These are malignant tumours of lymphoid tissue, that do not contain Reed-Sternberg cells
The name ‘NHL’ encompasses a very wide range of conditions.
Not all conditions involve the lymph nodes (e.g. MALT – see later)

The cause is basically unknown. There is very wide geographical variation, which probably indicates environmental factors are involved.

Generally speaking, the lymphomas of non-dividing mature lymphocytes are low grade, and the one of lymphoblasts are much more aggressive.

You should do all the investigations of HL as well as the following;

Low grade NHL – will follow a relapsing and remitting course; with an overall median survival of 10 years. They are generally not curable. Low grade NHL is capable of transforming to high grade NHL, in which case, survival is worse.
These account for 45% of cases. Often widely disseminated at presentation, due to them being asymptomatic.
Types include: MALT, follicular lymphoma, lymphocytic lymphoma
High grade NHL

Mucosa associated lymphoid(/lymphatic) tissue
Most commonly occurs in the stomach, but not always. In MALT tissue there is an abnormally large collection of lymphocytes, and macrophages. These have positioned themselves to be in a good position to intercept any antigens they come into contact with.

The same as Hodgkin’s

Low grade
Basically it depends on the sub-type present. There are loads of sub-types, and each disease would need discussing by an MDT meeting to decide on the best course of action.
High grade
A chemotherapy regimen called CHOP, (4 chemotherapuetic agents) + rituximab may be used.
Monoclonal antibodies can be useful for B cell lymphomas, and have greatly improved prognosis – being the only major advance in treatment in the last 30 years.

The histology is important in determining survival. Prognosis is worse if, at presentation:

This is basically a massive over-production of B cells, such that the mutated, non-functioning (in terms of being able to fight infection) B cells crowd out any normal B cells that are left, and prevent the normal ones from doing their job properly.

Basically, in the lack of B symptoms it is not treated. In the presence of B symptoms, then treatment usually involves chemotherapy, and monoclonal antibodies – this appears to be the same as for a high-grade NHL – thus I presume this is because CLL is actually classed as a type of NHL.