Constipation is a symptom and not a condition.
It is most common in women and the elderly. Often it is more like a perception that a real entity.
It can be affected by psychological factors. For example, it is possible to override the body’s autonomic responses subconsciously and thus exert a higher form of control over them and change the body’s reaction to certain situations. This is more common in women than men, and can often have a social aspect; e.g. women are embarrassed to go for a poo at work, or whilst out of the house. Some people argue that it is because we are conditioned from childhood that pooing is something dirty that we do in private and no-one else has to know about it. This may happen in constipation, but the process can be reversed if people ‘learn’ how to let their natural responses take over.
Constipation is defined clinically as a ‘change’ from your normal bowel habit. Normal can be anywhere from 3 times a day to 1-2 times a week. The important this is what is normal for you. When constipation is present there will usually be some degree of straining, perhaps a feeling of incomplete evacuation and lumpy or hard stools.

There are many, many causes, important ones include:

The role of the colon is to absorb water and electrolytes, and move faeces along to the rectum. About 2L of fluid pass into the large bowel each day. Stimulation of peristalsis is mostly by short chain fatty acids which are produced by the break down dietary fibre by floral bacteria in the ascending colon. It is also stimulated by release of serotonin (5-HT) by local neurones in response to colonic distension.
Normal colonic transit time is 8-24 hours, with on average 250g of stool production each day.

Constipation can be broadly divided into 3 categories: 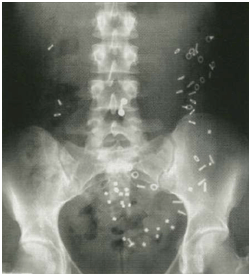 Here we can see various radio-opaque shapes ingested on 3 separate days. The imaging is always done 120 hours after ingestion of the first set of shapes, and thus from this we can see that all the shapes are still present, and are spread along the colon, thus confirming a diagnosis of severe slow transit constipation.

It is very important that the underlying condition is treated as the main priority. Education is also an important factor – patients should be educated on patterns of normal bowel movement, and reassured, that even 1-2 times a week is normal for some people. Those who are obese and lead a sedentary lifestyle should be encouraged to lose weight.
Most people will respond to increased dietary fibre and fluid intake, and if necessary, laxatives. You don’t need to PR every patient! This is more likely after first line treatments have failed, or in especially risky patients – i.e. they have a short history and also experience rectal bleeding – and as such you are very suspicious of rectal carcinoma. – in such cases you should always refer the patient for a barium enema and / or colonoscopy.
It is extremely important not to become reliant on laxatives. They can permanently alter the functioning of the bowel.