Migraine is a common cause of headache affecting about 15% of individuals. Headaches are typically recurrent, and last anywhere up o 72 hours.

They are typically associated with nausea and photophobia, and rarely can present with neurological signs and symptoms mimicking a stroke.

Migraine can occur in recurrent episodes (similar to tension headache) or in one off, irregular instances.
Incidence – 8-12%.
M:F – 1:2
To distinguish from a TIA: – TIA’s have sudden onset, with maximum deficits immediately. Headache is rare. In migraine, the deficits may occur gradually, and almost always accompanied by headache. In both cases aura may be present

In 50% of cases not trigger can be identified. Only in a very few cases will avoiding triggers completely avoid attacks.

Not entirely know. Some genetic pre-disposition. It is related to the dilation/constriction of cerebral blood vessels, and thus the neuropeptide CGRP (calcitonin gene related peptide) is thought to be important.
Some speculation that there is failure of inhibition , particularly in the visual cortex, and this is what actually causes the attacks.

During an attack (as long as other possibilities have been ruled out), give basic analgesia; e.g. paracetomol or aspirin. Be aware that peristalisis is often slowed during attacks, and so higher doses may have to be given to be effective. Also give antiemetic (e.g. metoclopramide) if necessary.
5-HT agonists (Triptans) may be useful for some patients (IM injection, or orally). use sparingly, and should be avoided in vascular disease. They block transmission in the trigeminal nerve to 2nr order neruons – and thus can be used in any process that activates the trigeminal nerve (e.g. cluster headaches, migraine). An example:
Anticonvulsants – e.g lamotrigine – treatment is experimental, but reduce hyper-excitability of the brain. Side-effects can be a big problem.
Other treatments
Re-breathing into a paper bag can help increase PCO2, and can resolve some attacks.

Suggest if episodes occur >2 per month
If one drug doesn’t work, try a different one after 3 months
65% of patients will have at least 50% reduced frequency of attacks with treatment. 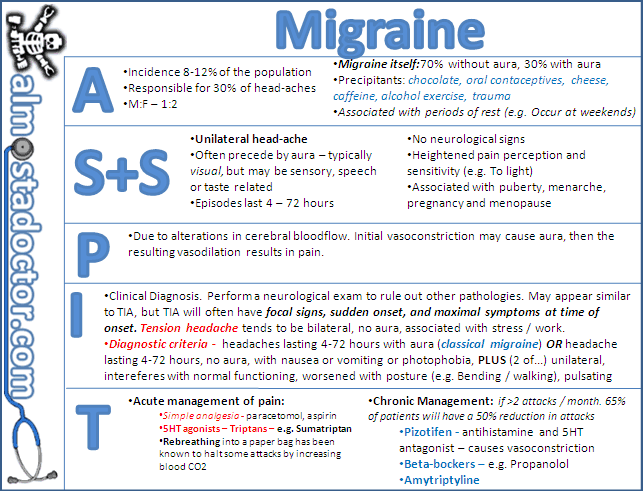