Pulmonary Embolism (also known as pulmonary embolus) is most commonly a complication of venous thromboembolism (VTE) from another source – e.g. a clot in the legs or pelvis (a DVT) that becomes dislodged, flows via the bloodstream through the right side of the heart and gets lodged in the pulmonary circulation.

It is not always a clot that causes a pulmonary embolism. Fat, air, amniotic fluid can all also be causes. For fat and amniotic fluid, these will normally resolve themselves with supportive care. Air is often an iatrogenic cause.

Some studies suggest that ‘silent’ pulmonary embolism occurs in up to 40% of DVT patients.
This article discusses Pulmonary Emobilism as caused by Venous Thrombolism
Mortality 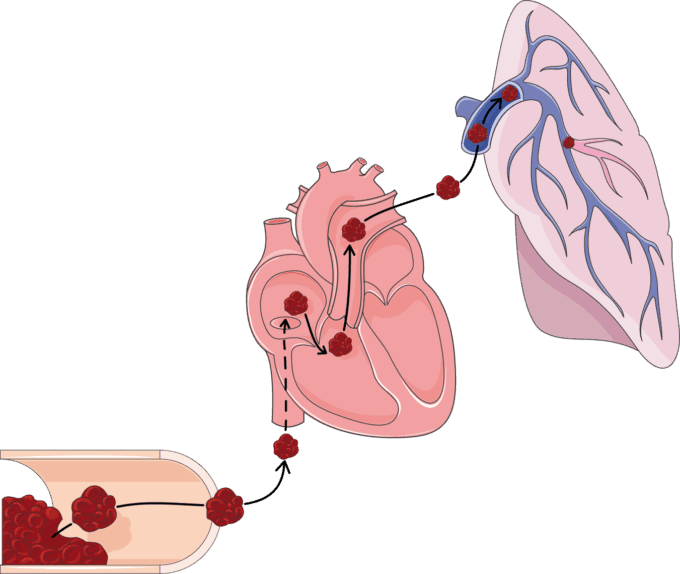 Image showing the route of a venous thrombolembolism as it travels from a peripheral vein, through the right side of the heart, and then becomes lodges in the pulmonary circulation, resulting in pulmonary embolus. Image by Servier Medical Art by Servier and is licensed under a Creative Commons Attribution 3.0 Unported License

Symptoms can be wide ranging, from none at all – to sudden death! They are often, but not always, correlated to severity.
Always make sure you ask about a family history of thrombosis!

Shortness of breath typically occurs within seconds to minutes of onset, and pain develops later.

Probably the most important question is should I investigate?

Defining risk of the probability of PE is important. There are two tools to help with this:

PERC stands for Pulmonary Embolism Rule-out Criteria.The PERC score is useful to rule out PE in low risk patients. If the patient’s score = 0, then there is a <2% chance of PE, and in the absence of convincing clinical signs, you can usually safely exclude PE as a differential.

Each factor below gives a score of 1. All factors must be negative for a negative PERC score. Any positive factor results in the need for further work up (move onto the Well’s Score)

D-Dimer is a fibrin degradation product – and as such, levels are raised by the presence of a blood clot in the circulation. A D-Dimer blood test can be useful to rule out PE or DVT as a differential. A negative D-Dimer PLUS a low Well’s score means that PE or DVT is extremely unlikely. Conversely, many factors can cause a positive D-Dimer – so having a raised D-Dimer does not necessarily mean there is a clot.

In reality it can be a tricky test to use. Even just a recent common cold can result in a raised D-Dimer! Almost any factor that causes inflammation will also result in a raised D-Dimer. Do be selective when requesting a D-DImer for your patients. Even if your patient has a low risk Well’s score, doing a D-Dimer might not always be the best option – for example if they have recently had cellulitis or some other infection.

“Should I do a D-Dimer?” is often a difficult questions which should involve consultation with your senior clinicians. Common pitfalls include:

Will often be normal. The main reason CXR is performed is to exclude other causes.

The CXR may show pulmonary oedema signs such as raised hemidiaphragm. May also show atelectasis – this is little areas of collapsed lung. This occurs because there is loss of blood to some areas of the lung, which results in collapse of these areas – as a conservative mechanism.
Look for atelectasis in both lungs!
If the CXR is normal, but the patient is breathless, this raises the suspicion of a pulmonary embolism. If the CXR has bilateral changes, but the patient only has unilateral pain, this also raises the suspicion of pulmonary embolism.

Changes here are common but often non-specific (e.g. T wave changes, new onset AF, RBBB right axis deviation). Such changes are seen in about 80% of patients. The most common findings are T wave inversion and sinus tachycardia. Larger emboli can cause right heart strain, which will result in the ‘classical’ S1Q3T3 pattern of ECG changes in PE, although this classic sign is actually quite rare (<20% of cases). the S1Q3T3 pattern is:

VQ scans use much less radiation than a CTPA. As such, VQ scans are used to assess for PE in patients who are at risk from higher radiation doses – such as pregnant women, and younger female patients.
However, VQ scans are also much less accurate at diagnosing PE. They need to be interpreted by a specialist. A negative VQ scan has a very high negative predictive value, but positive scans are less useful.
The result of a VQ scan is usually given as a risk probability – high risk, intermediate risk or low risk.
Only 15-20% of scans will show obvious pulmonary embolic disease
20% will obviously have no PE
The rest (60%) you just cannot tell!

CT-pulmonary angiogram – a CT with contrast. This is a test that use a CT scanner and radioactive dye to look at the pulmonary circulation. Its main use is in the diagnosis of PE. It is much more sensitive and specific than VQ scan.

The patient will probably be hyperventilating (hence the low CO2).
Metabolic acidosis is commonly seen in those with a massive PE and cardiovascular collapse.
You cannot exclude a PE with an arterial blood gas.

Troponin is raised in 20-40% of patients with PE as a result of the extras stress and stretch placed on the right ventricle in PE patients (due to increased pulmonary arterial pressure).

Higher troponin has been associated with a worse prognosis.

Is used to look for right ventricle strain and dilatation in patients with suspected massive PE. The degree of RV dysfunction can be used as a predictor of death.

Paradoxical Embolism
This is an embolism that goes through a defect in the heart, and goes on to cause a stroke. The clot passes from a vein to an artery, through some sort of ‘fistula’ – usually a cardiac defect
For example, a DVT could embolise, and travel to the heart. This might in a normal individual, cause a PE. But in the case of a paradoxical embolism it will travel through a defect in the heart from the right side to the left side, and thus miss out the pulmonary circulation. It is then free to travel through the arterial circulation, until it reaches an artery that is so small it cannot travel down it, and thus causes an ischaemic blockage.
These account for about 2% of arterial emboli

Like any chest pain presentation, differentiating PE can be difficult. Typically, larger PE’s (and sicker patients) are easier to differentiate. Using the Chest Pain Differentializer might be useful.