Chronic Obstructive Pulmonary Disease (COPD) is a chronic respiratory condition characterised by airflow obstruction, most commonly the result of a combination chronic bronchitis and emphysema.
Unlike asthma, in COPD there is little or no reversibility of the obstruction. The airflow limitation is usually progressive and is associated with an abnormal inflammatory response of lung tissues to certain particles. It does not change markedly over several months – i.e it is slowly progressive.
Most cases of COPD are due to smoking, or other exposure to noxious gasses or particles.
COPD is the 4th leading cause of death worldwide.

Exacerbations are often mild and can be treated in primary care, but COPD also frequently present to hospital with exacerbations. Treatment of exacerbations typically involves oral steroids, increases in doses of inhaled agents, oxygen therapy and in many (but not all cases) antibiotics.

Severe long-term cases may result in the use of home oxygen therapy. 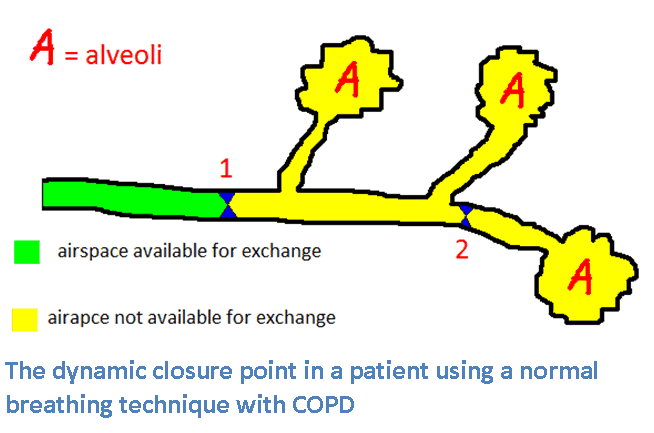 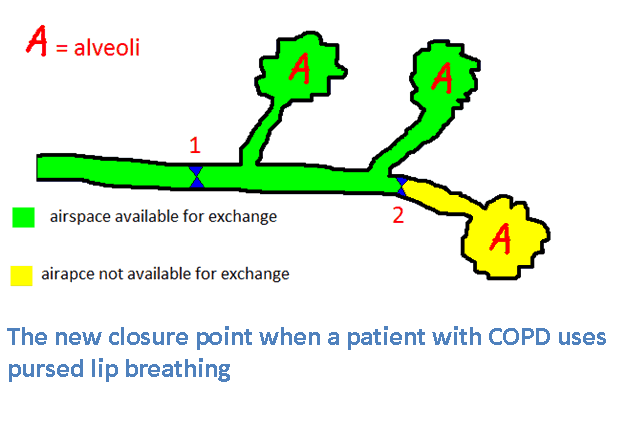 As we can also see, COPD leads to gas trapping – which causes an increase in dead space and leads to hyperinflation. This is not only a problem in its own right as it reduces the amount of air exchanged with outside air with each breath, but it also reduced chest wall compliance.
Hyperinflation is particularly a problem during exercise as the time for expiration is reduced, and hyperinflation is exaggerated.

This can be done clinically using the GOLD criteria. This measures the FEV1 as a % of the FVC – thus spirometry is the test needed for clinical diagnosis.

Defined as cough and sputum production on most days for at least 3 months during the last two years.

In this, there is:
particularly in the larger airways. In extreme cases, the bronchial tissue itself may become inflamed, and these may be pus excreted into the lumen.
≫ the main cell involved in this reaction is the NEUTROPHIL – in asthma, the main inflammatory cell involved is the eosinophil. The main leukocyte infiltrate is CD8+ in COPD, as opposed to CD4 in asthma.
After events of inflammation, there will be scarring and fibrosis of the tissue. This thickens the walls of the airway, and thus reduces the size of the lumen (thus decreasing the amount of air you can get into and out of the lungs quickly (FEV1),and also increasing the distance that gasses have to travel in order to diffuse properly.
Also remember that the inflammatory process will also cause bronchoconstriction – thus in some cases of COPD where bronchoconstriction is a factor, bronchodilators, such as salbutamol may be of some use for symptom relief.
Initially, the small airways are affected by chronic bronchitis, and this initial inflammation is reversible if smoking is stopped soon enough. Later, the larger airways become affected, and the process is no longer reversible.
In the later stages there will be fibrosis, and squamous cell metaplasia, further narrowing the bronchial lumen.
The epithelial layer can become ulcerated, and when the ulcer heals, the squamous epithelium may be replaced by columnar cells.

Emphysema causes enlarged airspaces distal to the terminal bronchioles, with destruction of the elastin alveolar walls causing decreased elastic recoil.
The three main pathological effects in COPD:
There are several different types of emphysema that can be identified anatomically – e.g. centrilobular and panlobular are the most common types. But this is not clinically very useful, as often several different types co-exist to different degrees.
About 1/3 of lung tissue has to be destroyed before the clinical consequences of emphysema are seen. You should also note that after the age of 25, an individual will naturally lose 30ml of functional lung capacity each year – the process of COPD just massively accelerates this!
Emphysematous bullae will often form, which are essentially just large closed off air spaces with trapped air inside them.

α 1 antitrypsin is an enzyme that destroys other enzymes! It destroys several proteases, including trypsin, elastases and collagenases. In the deficiency, these enzymes aren’t destroyed, and they are allow to happily eat away at the lung tissue, leading to COPD.
The condition is genetic, and is autosomal dominant. You need to be homozygous to have clinical effects, and about 1/5000 people are. 1/10 are carriers of the gene.
The deficiency accounts for about 2% of cases of emphysema in the UK.
The proteinases that act in the lung are often released by inflammatory cells, such as macrophages. Thus, in smoking, there are more of these around, and the effect becomes exaggerated. This also explains the mechanism of emphysema in a normal individual who smokes.

These are most commonly caused by:
Because these two organisms are by far the most common causes, you do not need to take a sputum sample in an exacerbation of a known COPD patient – the first line treatment is amoxicillin 500mg tds for 7 days. Second and third line options are co-amoxiclav and ciprofloxacin respectively. These have almost identical dose regimens as amoxicillin, as does clarithromycin which is given in penicillin allergic individuals. 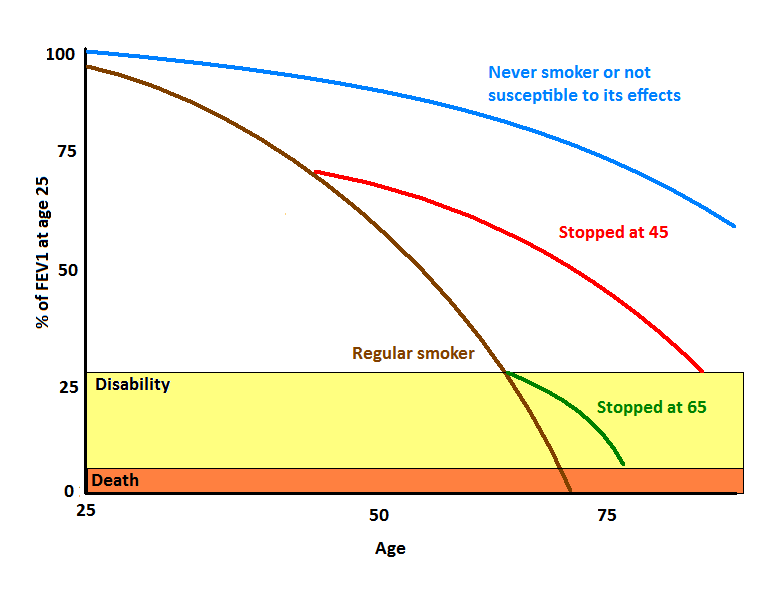 Drugs – in many cases these are similar to those used in asthma, despite the fact that on paper, it appears they shouldn’t work. However, in practice, many patients get great symptom relief from these drugs:

Exacerbations – if they have 2 or more each year, then they are eligible to try inhaled steroids.
When using these drugs, the change in FEV1 will usually be very small (the whole definition of COPD is that the airway damage is irreversible). Thus, the use of these drugs should be related to the amount of breathlessness the patient experiences.

Steroids – a trial of these is indicated in virtually any patient with symptoms. The trial is typically 40mg prednisolone for 2 weeks. If the trial increases the FEV1 by >15% then you should prescribe a long term inhaled corticosteroid – i.e. beclomethasone – 400μg twice daily. If there is no response in the trial, then there is no point giving the inhaled corticosteroid.

Antibiotics – these should be given promptly during exacerbations, as they reduce the duration of the exacerbation, and prevent hospital admission and further lung damage.

LTOT – long term oxygen therapy
This can prolong the life expectancy of COPD patients! Basically, the longer you give it for, the greater the increase in life-expectancy. You should give it @ 2L via nasal prongs for at least 15 hours a day. This aims to keep oxygen saturation above 90%.

Patients should be asses for LTOT when they have:

This basically just involves exercise training – and the aim is to improve symptom control. The exercises usually involve walking / climbing stairs, and can be arranged at clinic or in the home. These exercises are often in conjunction with physiotherapy and education classes. Breathing exercises are of little use.
Pulmonary rehabilitation has no effect on life expectancy

Patients can lose weight – this is a particularly bad prognostic sign – because it shows that they are expending a huge amount of energy trying to breathe – you have to encourage them to try and gain weight – but you can lose muscle mass, and this will make it even more difficult to breathe.

COPD patients should receive an annual flu vaccine, and a one-off vaccine of polyvalent pneumococcal polysaccharide – which provides life-long immunity.

Commercial airliners have a cabin pressure equal to an altitude of 2750m. At this level PaO2 will fall from 13.5kPa to 10kPa – and oxygen saturation will fall by 3%. In normal healthy individuals this has no effect, but in patients with even moderate COPD, this can reduce their O2 saturation to around 6.5kPa and oxygen therapy may be needed. As a result, patients with COPD should consult their doctor / airline before travelling.

This is a bad prognostic sign. It is thought to be caused by the increased energy needs of the body as a result of the massive amount of energy needed for respiration. A small contributory factor may also be that patients find it hard to eat because they are too breathless!

Patients will either basically get respiratory failure or cor pulmonale.

This is hypoxaemia without hypercapnia. The CO2 level will tend to be normal or low. It is caused by a VQ mismatch. Common causes include:

This is hypoxaemia with hypercapnia. It is a result of alveolar hypoventilation. There is not VQ mismatch. Common causes include:

In type II failure, the respiratory centre is likely to have become desensitised to CO2 levels, and hypoxia will now be its main driving force, thus oxygen therapy should be given with care! However, don’t leave the hypoxia untreated!