If we go back to our anatomy, we know that there are two venous systems in the lower limbs, the deep and the superficial. Connecting these two systems there are numerous perforating branches. To maintain adequate venous return against gravity, there are two main mechanisms in place.

In the case of varicose veins it is the former of these two mechanisms that is usually the problem. It used to be thought that valve incompetence, resulting in blood pooling/stasis was the cause of the dilated vein, however that hypothesis has become out of favour, and the current thinking is that weakness in the vein wall causes dilation of the vein. If this occurs around a valve, then the cusps of the valve will no longer meet in the middle and the valve will become incompetent, resulting in backflow of blood, and therefore inadequate drainage. The most common valves involved are those around the saphenofemoral junction (in the groin), however they can occur in other places for example the junction between the short saphenous vein and the popliteal vein.

This is how primary varicose veins develop. Secondary varicose veins are less common, and result from pelvic or abdominal masses which obstruct blood from returning from the lower limbs.
There are several other vein problems that are often mistaken for varicose veins. Typical varicose veins are often referred to as Truncal veins. Reticular veins are tortuous dilated veins that are not part of the long/short saphenous vein system, and Telangiectasia (more commonly known as Thread veins or Spiderveins) are dilated venules. These are not varicose veins, but are associated with them, and as such their treatments will be included later.

Apart from their unsightliness, most varicose veins are symptomless. If they are then symptoms include Heavy legs, Aching, Swelling, Itching, Night Cramps, Hot or Burning Sensations, and Restless leg syndrome. As you many have noticed many of those are sensations, and many patients will describe their symptoms as just this “it’s like a sensation, a discomfort”. Often the unsightliness of their veins will cause patients to attribute other leg problems to their veins, and it is important to distinguish whether their symptoms are in fact due to their veins or not.

Look if the veins are present. If there are symptoms – can these be attributed to the veins? If not, treat this separately. Check for history of DVT’s, and risk factors for DVTs (Contraceptive pill/ Hormone replacement therapy).  Although there is no evidence that varicose veins themselves increase the risk of DVTs, if the patients have surgery on their legs then they are at increased risks of DVT post op, and as such may require prophylactic heparin. Skin changes are also important as they increase the chances of ulceration occurring. Is the patient pregnant?
Below is a summary of a clinical examination for varicose veins. 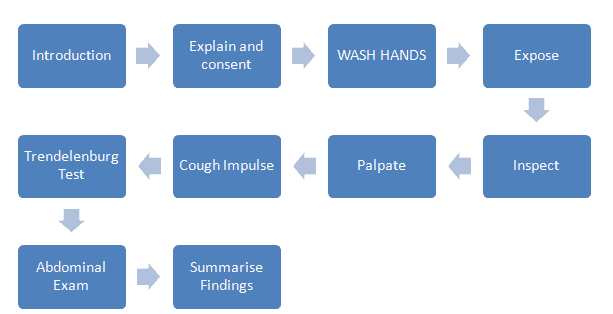 For this examination (apart from the abdominal part) The patient should remove their trousers, keeping underwear on, and be STANDING as the gravity allows the full extent of the veins to be seen. On inspection, the full distribution of the veins should be noted (especially which leg!) and also the presence of any skin changes (eczema/hair loss/redness/ the presence of ulcers). Ensure you check both the front and the back of the legs as the short saphenous runs along the posterior aspect of the leg.
Palpation should be done after asking if the patient is in any pain. Check to see if the veins are tender, which may be a sign of thrombophlebitis, or hard, which could indicate thrombosis. Also palpate the skin surrounding the veins for any signs of dermatosclerosis or atrophic Blanche. Is the skin warm to the touch?
Cough impulses are a sign of incompetence of the saphenofemoral junction. Place your fingers over the junction (5cm inferiomedial to the femoral pulse). Get the patient to cough. If the junction is incompetent then a fluid thrill will be felt.
Trendelenburg tests although being done rarer and rarer are useful tests for assessing the site of incompetence, although not very accurately. Get the patient to lie down with their leg elevated. Tie a tourniquet around the site of the saphenofemoral junction and then get the patient to stand up; you should see a slow reflow of blood into the veins from below the tourniquet. Look at the veins as you release the tourniquet. If the saphenofemoral junction is incompetent, then there will be a sudden flow of blood into the veins from above the tourniquet site. If this is not the case, then repeat, gradually working the tourniquet site further distally, until the site of incompetence is found.
Abdominal Exams are used to try and locate any abdominal or pelvic masses which could cause secondary varicose veins.

Colour Doppler venous scans are the usual investigation of varicose veins, as they show the site and degree of valve incompetence, as well as assessing the deep venous system. If there is concurrent arterial problems, and surgery is being considered then an arteriogram may be required to prevent the formation of ulcers post surgery.

Treatment is often not needed, in which case reassure the patient and treat the other causes of their symptoms. Surgical treatment on the NHS is not normally available for purely cosmetic purposes, unless there is a very large impact on the quality of life or psyche of the patient. If the main problem is oedema or aching, then compression stockings, usually grade I or II can help to ease the symptoms, and sometimes compression stockings are used as an assessment to the effectiveness surgery might have. If surgery is needed then there are several different options available.
Traditional surgery – Is usually done as a day case procedure. Under general anaesthetic incisions are done at two sites, usually knee and groin and the saphenofemoral junction is ligated and then the vein is stripped (pulled out), with smaller veins on the calf usually pulled out using multiple small stab avulsions. Although this removes a large part of the superficial venous drainage of the leg, the deep veins can compensate. There is usually a degree of bruising after the procedure, and around 17% of patients suffer some minor complications (neuralgia due to damage to surrounding structures) however major complication are very rare. There is a recurrence rate of around about 20-30% after ten years.
Endovenous laser therapy (EVLT) and Radiofrequency Ablation (RFA) are newer techniques that can be done under local anaesthetic and appear to have quicker recovery rates. However their long term effectiveness remains to be seen. Classed as minimally invasive, a small incision into the vein is made distally, and a catheter is inserted. A laser or high frequency alternating current is passed into the vein as the catheter is slowly withdrawn, which heats up the blood and ablates the vein in question. Avulsions of smaller veins in the calf can accompany the procedure.
Injection sclerotherapyinvolves a sclerosant into the vein, to shrink it, and is accompanied by at least 2 weeks of compression stockings. It has fallen out of favour as a result of high relapse rates. More recently Foam sclerotherapy has been used widely, in which the sclerosant is mixed with other substances (including air!) and the foam is injected into the vein, spreading fast and causing the vein to spasm. Research is ongoing to prove its effectiveness. A large problem with both types of sclerotherapy occurs if the sclerosant is injected outside of the vein, in which case necrosis and scarring can occur, and it has been reported that should the sclerosant/foam enter a deep vein via perforating branches then DVTs may occur, however this appears to be rare.
After all types of surgery, there is a relapse rate. This could be due to neovascularisation (formation of new vessels) and their dilatation, or other veins previously unaffected may become dilated.
Reticular veins are treated using sclerotherapy or stab avulsions, and telangiectasia are treated with injections, lasers or high intensity light.