Heart failure (also CCF – congestive cardiac failure) is a clinical syndrome which refers to a state of reduced cardiac output. Typically it is defined as:

Heat failure is the end stage of many cardiac diseases. It is a serious condition with a high rate of mortality and morbidity. 50% of patients will die within 5 years of diagnosis. The annual mortality rate is 10%, and 50% for those with severe heart failure.

Studies show that heart failure is chronically under treated. It accounts for 5 in 1000 hospital admissions each year in the UK.

It is a relatively common disorder which affects about 1-2% of the population.

The classical presentation includes shortness of breath (especially on exertion and on lying flat), fatigue and ankle oedema. Signs may include hepatomegaly, tachycardia, tachypnoea and raised JVP.
Historically diagnosed clinically (without the need for investigations) with the Framingham Criteria, although more recent guidelines from the European Society of Cardiology require the presence of signs and symptoms of heart failure, with “objective evidence” (usually an echocardiogram).

ACE-inhibitors are the mainstay of treatment and have been shown to increase survival. In the acute presentation with fluid overload, diuretics (particularly frusemide) and GTN are used. B-blockers can improve systolic function in cases where it is impaired. Other drugs that may be considered include digoxin, where atrial fibrillation is a contributory factor, and spironolactone may be added additional to frusemide for symptomatic patients.

The exact drug choices will be influenced by the specific features of the individual case.

Controlling other risk factors and co-morbidities can also prolong survival, for example;

Heart failure is the end-point for almost all cardiac disease. Identifying the underlying cause is important, because treating it can prevent the progression of heart failure.

A formal set of diagnostic criteria for congestive heart failure (CHF) resulted from the well-known Framingham Heart Study (an excellent example of a prospective study, to be mentioned in any public health examinations!). As with other diagnostic criteria systems this one makes use of Major and Minor criteria which, apart from being study aids in themselves, are sure to impress finals examiners if you can remember them (mnemonics provided for this purpose!).

Diagnosis of congestive heart failure using the Framingham criteria requires simultaneous presence of 2 Major or 1 Major and 2 Minor criteria, which provide for a 100% sensitivity (but 78% specificity) value when diagnosing the symptoms and signs of CHF.

Small print is that the Minor criteria can only be used if they are not attributable to other medical conditions (eg. pleural effusions cannot be due to infection, malignancy, etc).

One set of mnemonics for the criteria is the following: SAW PANIC for the Major, and HEART ViNo for the Minor. Although, there are probably infinite other (less tame) personalized mnemonics out there!

The single most useful investigation is echocardiogram. However, this is not always practicable or timely to access. Initially all patients should have an ECG and CXR, and in the UK, BNP.

All those suspected of heart failure should be referred to a cardiologist for specialist management. In the meantime, treatment can be initiated in the community (or in the emergency department if an acute presentation). Below, we first discuss chronic, and then emergency management.

Most patients with class I and I disease will be treated with an ACE-i and a diuretic. More severe cases may require additional medications. The choice of beta-blocker and calcium channel blocker is particularly important, as some can worsen prognosis and clinical features.

In advanced situation can consider; 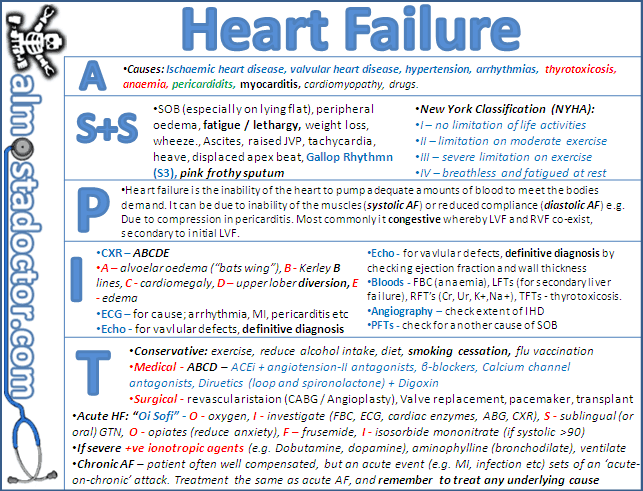