Spirometry is the most widely used pulmonary function test (aka lung function test). It measures the volume and flow of air during inspiration and expiration; it is an assessment of how effectively the lungs can be emptied and filled. Spirometry uses various measures of inspired and expired air to give an indication of any underlying lung disease.

Modern spirometry is usually performed in the GP surgery or respiratory clinic.

It can be used to assist the diagnosis of:

Although, results need to be interpreted in clinical context and spirometry alone cannot always provide an exact diagnosis.

Sometimes, spirometry results are talked about as being:

There is a separate article about differentiating obstructive vs restrictive lung disease.

Spirometry is also used to monitor the effectiveness of treatment in lung conditions.

There are a lot of terms involved in measuring lung function! These include:

Understanding these concepts is a bit easier if we visualise the volumes graphically: 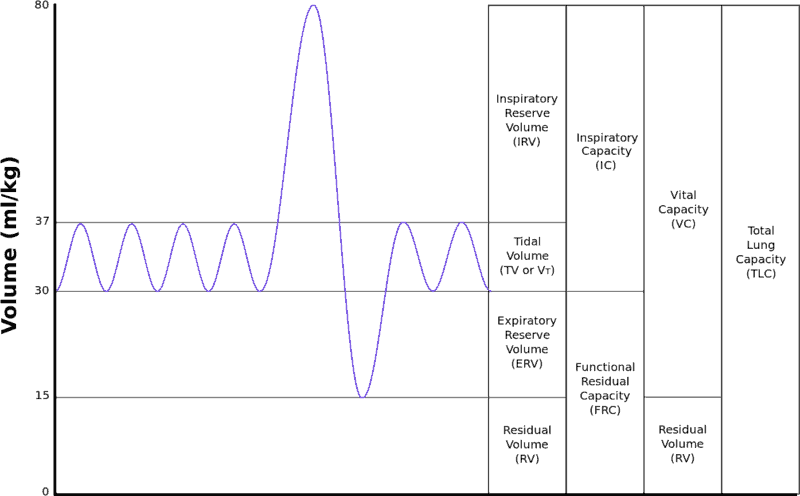 Lung volumes. This file is taken from wikimedia commons and is licensed under the Creative Commons Attribution-Share Alike 3.0 Unported license.

There are typically two types of graph produced by spirometry.

Understanding the patterns seen in both of these can help to diagnose the various lung conditions.

This involves a single breath, taken after full inspiration, after which the patient is asked to exhale as quickly and fully as possible. The rate at which the air is expelled gives an indication of the function of the lungs.

This curve is useful for measuring the FVC and FEV1, and subsequently the FEV1/FVC ratio.

During this part of the test, the patient takes multiple FVC breaths in and out through the spirometer. There is no indication of time included on this graph, just the volume (x-axis) plotted against the rate of flow on the y-axis.

During the “live” tests, multiple “loops’ are plotted on top of each other to see an “average” of the lung function. The graph is traced in real time in a clockwise direction.

What is important about the flow-volume loop is the pattern of the expiratory phase. FVC and FEV1 cannot be easily determined from these graphs.

Typically the results can be divided into 4 categories 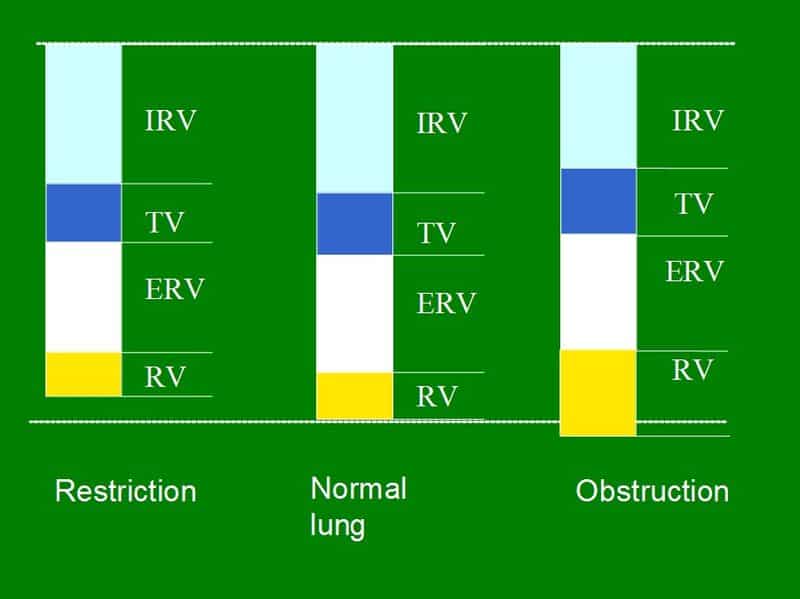 Comparison of attic lung volumes. This file is taken from wikimedia commons and is licensed under the Creative Commons Attribution-Share Alike 3.0 Unported license.

Performing spirometry causes a significant increase in intra-thoracic pressure. As such, it should not be formed in the following patients:

Patients sit upright in a chair. They wear a nose clip, and then are asked to blow out forcibly into a tube, with the lips tightly sealed around the tube, from a position of maximum inspiration.