Cystic fibrosis is the most common life-limiting inherited disease in Caucasians.
It is caused by a genetic mutation that alters mucus production, resulting in a more viscous solution.
It is autosomal recessive.
Life expectancy is improving. Newborns with CF have a life-expectancy of about 40 years.
The condition is inherited in an autosomal recessive pattern.

CF is the result of mutations on the long arm of chromosome 7, in the material that codes for the Cystic fibrosis transmembrane regulator (CFTR) protein. This is essentially a chloride channel. There are many identified mutations, but the most common is known as ΔF508, and accounts for 80% of cases.

On mucosal surfaces, this channel normally allows chloride ions out of the cell in the presence of cAMP, and into the lumen (e.g. of the airway or pancreatic ducts).

The result of this reduced chloride level is an increased re-absorption of sodium from the fluid in the lumen. This causes reduced excretion of water.
The viscous mucus blocks the exocrine ducts of the pancreas.

All of the above, plus:

All of the above, plus:

Diagnostic:
Sweat test – this uses electrodes to provoke sweating. Two electrodes are placed on the skin, and a small current passed through them. Filter paper is used to collect a sample of the sweat. Then the concentration of both sodium and chloride ions is measured, but it is the chloride component that is important for diagnosis.

Elastase in faeces – low levels of elastase in the faeces is diagnostic for pancreatic insufficiency.
Screening in newborns – has been shown to improve lung function in the child. Tests include:

Other tests – probably not performed for diagnosis, but abnormal results may be spotted on routine investigations:

Should be managed by MDT. Very important to involve the parents as part of the team as well. Patients should be followed-up in outpatients at least once a year.
There is no cure for CF. The aims of treatment are to minimize the progression of the disease, and maintain adequate nutrition and development.

Nutrition – there is a very strong link between good nutrition and good prognosis for CF. 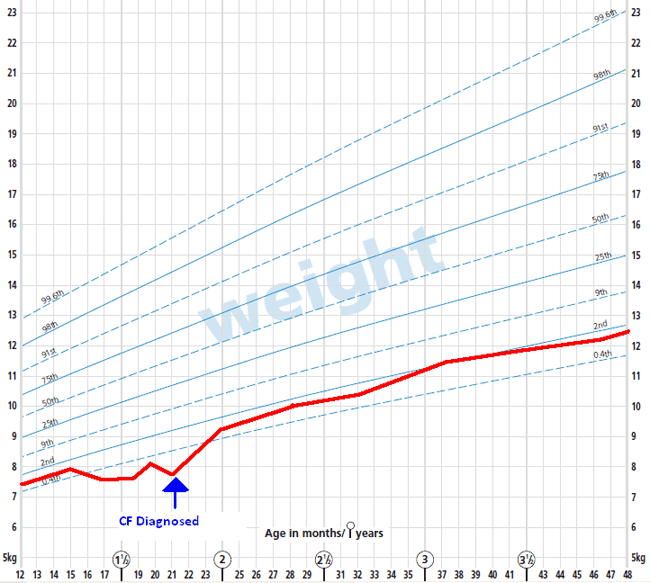 Respiratory complications – the treatment for the respiratory problems associated with CF is very similar to that of chronic bronchiectasis.
Antibiotic therapy

Mucolyitcs – e.g. DNases – these are products that break down DNA found in the sputum as a result of copious breakdown of inflammatory cells. These drugs make mucus less viscous. This can improve pulmonary function and reduce the number of exacerbations.
Azithromycin is another antibiotics that is often used. It has been proven to reduce the frequency of exacerbations, however, this is probably the result of immunomodulatory actions, and not a direct antibiotic effect.

Nebulisers – may be useful in some patients, especially those with symptoms consistent with asthma, although a diagnosis of asthma is often difficult to confirm.

Home oxygenation and CPAP – non-invase oxygen therapies may be used in the later stages of the disease
Lung transplant – can dramatically improve function, and may be considered later in life. It is very rare in children, and for adults there are not enough donors to supply demand.
Postural drainage

Future treatments could involve gene transfer therapy, whereby the affected CTFR gene could be replaced by a fully functioning version through adenovirus therapy. CF is a particularly good candidate for such therapy, as the bronchial mucosa is easily accessible via inhalation.