Upper GI bleeding is a major complication of Peptic ulcer disease. It occurs in 1/2000 people each year, of which ½ of these cases are due to PUD. Also remember that patients who take long term aspirin not only have increased risk of ulcer, but that they have a reduced platelet count, so if their ulcer bleeds, they are likely to lose more blood.

Bleeding from below the duodenal/jejunal junction will virtually never produce haematemesis. The more altered that blood in the stool is, the more likely it is to be from higher up the GIt.
Blood is a good laxative, and it is also likely to cause colicky pain. Chronic bleeding is far more common that acute, and it is likely to produce iron deficiency anaemia.

On endoscopy, blood clots appear as little black dots on the sites of the ulcer. The clots are usually digested within ½ an hour, so when clots are present, this suggests continued bleeding. A bleeding ulcer means the ulcer has eroded a blood vessel.
In serious cases, you will actually see the blood spurting from an artery!

Oesophagitis is a general term used to describe inflammation of the oesophagus. It is caused mainly by stomach acid. The causes are listed below.

This will produce larger volumes of bright red blood.This often occurs after a period of prolonged and vigorous retching and vomiting, most commonly often after a period of heavy drinking. The retching is so strong that it tears the oesophageal / gastric junction, causing heavy bleeding. The bleeding will result in haematemesis. Usually it will stop by itself, and these patients will need no further treatment

This will produce large volumes of dark red blood. These are an effect of severe liver disease. In liver disease, the pressure in the portal system will increase greatly. As a result, anywhere where blood can ‘escape’ the portal system and get back to systemic circulation will become overloaded with blood, and the oesophagus as well as the rectum is a place where this can occur. As a result, in liver disease you will get oesophageal and rectal varices. Suspected varices require urgent endoscopy.  If on endoscopy you see the white nipple sign (the varices have an obvious white ‘tip’ a bit like a spot), then this is a sign that the varices have already bled, or are about to bleed. This whiteness is caused by a local weakness in the variceal wall. In some people it may appear red. 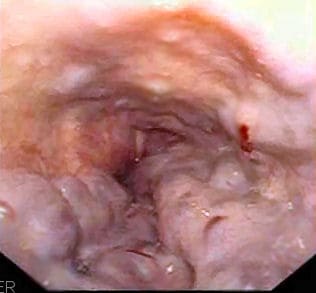 There is a scoring system to measure the severity of GI bleeds, known as the Rockall scoring system. This gives a score from 0-8+ and from this score you can predict the likelihood of mortality and re-bleeding. This helps you decide what to do with the patient.
You should never perform endoscopy on a bleeding patient as you could worsen the patient and even kill them. You should wait until you have stabilised the patient first (~24hrs).

Peptic ulcer – you should act immediately to reduce the amount of acid in the stomach. This will inhibit the action of pepsin, and may encourage the initial bleed to heal by itself if the first 24 hours.
The rest is then exactly the same as you would treat a normal peptic ulcer!
Oesophageal Varices– you should treat the chronic liver disease with non-selective β-blockers to lower the general venous pressure and reduce the risk of variceal bleeding. 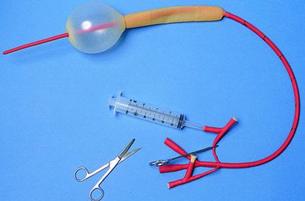 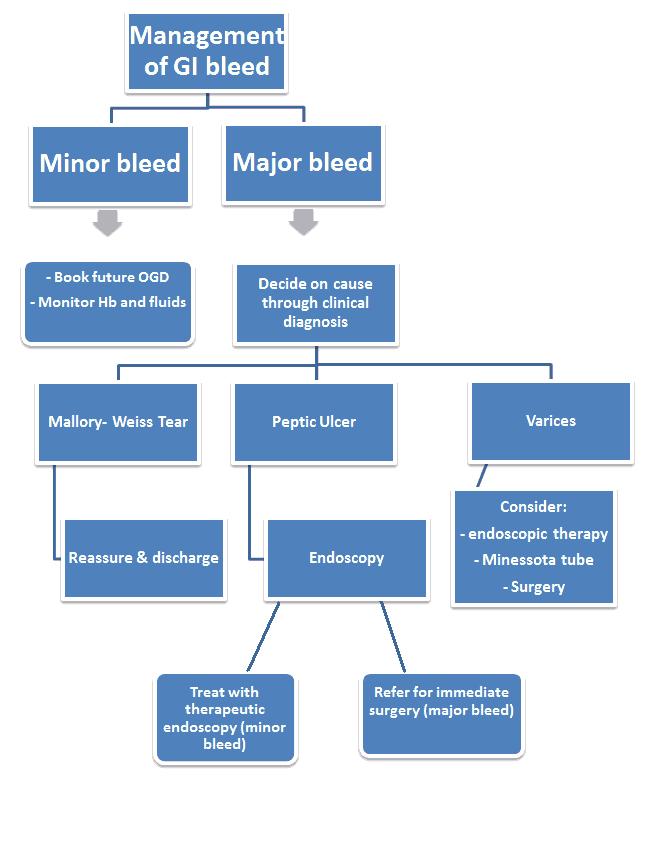