Hypertension is one of the most common medical diagnoses, and also one of the most well studied. Hypertension rarely causes any symptoms in its own right, but is clinically significant because it increases the risk of cardiovascular disease (heart attack and stroke), and to a lesser extent, kidney disease.
The textbook ‘normal’ blood pressure is 120/80. Many patients, particularly young adults (more common in women) have a lower baseline blood pressure than this. Providing they are not symptomatic (e.g. light headed, syncopal symptoms), this is normal.
Hypertension is defined as a BP >140 systolic or >90 diastolic.
Some guidelines grade hypertension as mild, moderate and severe:

The mainstay of management involves lifestyle interventions (encouraging exercise, modifications to diet), and pharmacological treatments.
The main classes of drugs used in medical management are:

They are broadly equally effective. It is thought that the reduction in cardiovascular disease risk is mainly related to the reduction in blood pressure, regardless of the mechanism used. Up to 70% of patients will not have adequately controlled BP with a single agent. It is very common to combine multiple medications to achieve an acceptable BP.

ACE inhibitors or ARBs are recommended as the first line drug, as it is thought they have slightly better long-term cardiovascular disease outcomes.

The first-line recommended combination is ACE-inhibitors (or ARB) with a calcium-channel blocker. This have been proven superior to combinations with thiazide diuretics.

Other drugs that can lower BP – such as alpha-blockers and beta-blockers are not routinely recommended for treatment of hypertension because they have been shown to be inferior at reducing the risk of cardiovascular disease.

Hypertension is rarely an emergency unless associated with signs of end organ damage, and thus is typically managed in the community. A hypertensive emergency (aka malignant hypertension) presents with acute signs and symptoms and needs urgent admission to hospital.

It has multifactorial aetiology
Genetic factors – high blood pressure tends to run in families. 40%-60% have a genetic component
Foetal factors – low birth weight is associated with hypertension (and also CVD) in later life. This could be due to adaptive changes the foetus makes in the uterus to under nutrition. These changes could change the structure of arteries, resulting in hypertension later in life. Hormonal systems may also be altered
Environmental factors: 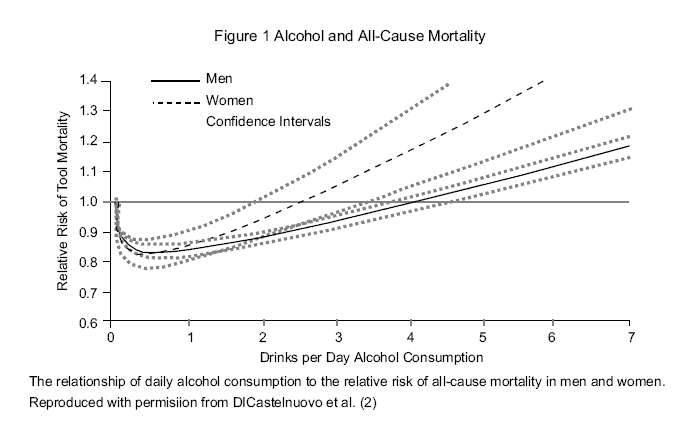 The J-curve of alcohol vs all cause mortality. Taken from the International Scientific Forum on Alcohol Research and AIM and reproduced in accordance with the Open Government License.

Secondary hypertension
This accounts for 5-10% of cases. Causes include:
You can also class hypertension in respect to its progression

In hypertension there is an increase in peripheral vascular resistance as a result of vasoconstriction, and hypertrophy of the arterial wall.
Blood vessels
Not only does hypertension cause atherosclerosis, but it also changes the arterioles and small arteries. These changes essentially cause narrowing of the lumen.
Changes in benign (essential) hypertension include:

In arteries (over 1mm in diameter) – muscular hypertrophy of the media, reduplication of the external lamina, intimal thickening. The walls of the arteries often become less compliant.

In arterioles – hyaline arteriosclerosis – this is protein deposition in the arterial wall. The lumen of the artery narrows, and aneurysms may develop.
In the vessels in the brain – microaneurysms (called Charcot-Bouchard aneurysms, and also sometimes miliary aneurysms) can appear

Other changes generally occur in malignant hypertension, but they can also sometimes occur in benign hypertension:
Don’t forget, that the baroreceptors will ‘reset’ themselves to the high pressure – so if you reduce pressure really quickly, you get cerebral ischaemia!

Sometimes also referred to as target organ damage.
These complications are more likely if the patient smokes, and if the patient has high cholesterol.
Retina
Fundoscopy is a very useful tool in determining the damage caused by hypertension all over the body – not just in the retina. by viewing the retina, you get an excellent view of the arteries that supply it – and this sort of view of the arteries cannot be seen anywhere else.
The retinal signs are most commonly seen in malignant hypertension
There are 4 grades of hypertensive retinopathy that can be distinguished:
‘Hard exudates’ – are small white, hard, dense deposits of lipid. These, along with dot haemorrhages (micro aneurysms) are more commonly associated with diabetic retinopathy, than hypertension
Heart
Systemic (left sided) hypertensive heart disease
In this condition, changes that were initially adaptive to cope with the hypertension, lead to cardiac dilatation, congestive heart failure, and even sudden death.
Pulmonary hypertensive disease
Once the left side of the heart fails, then pulmonary hypertension can lead to congestive heart failure.
Ischaemic heart disease
Enlargement of the ventricle, combined with the artery effects, can lead to ischaemic heart disease
Brain

Diagnosis is not aa straightforward as a one-off reading. Blood pressure varies greatly from minute to minute and day to day. To confirm a diagnosis of hypertension, some form of home monitoring is required.

If hypertension is suspected (e.g. from a one-off clinic reading): 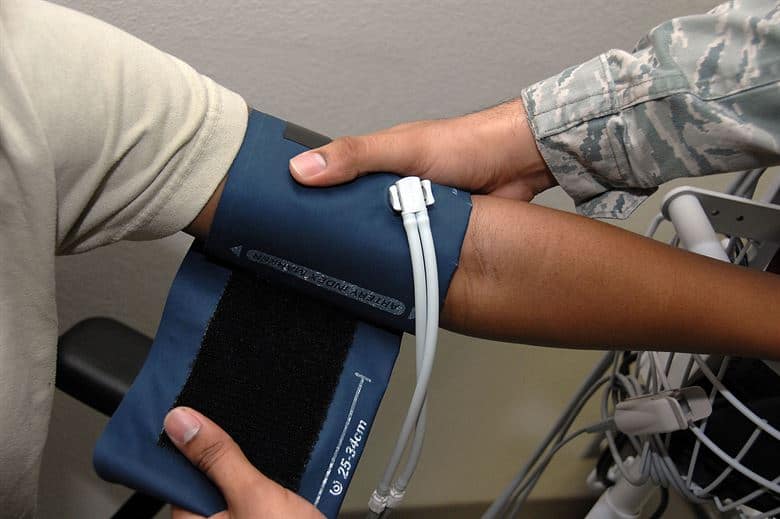 Its at about this point that I tell my patients to “take a couple of deep breaths, and think some relaxing thoughts…”

When taking a reading in the clinic

Every patient with hypertension should be tested for evidence of target organ damage. This should include:

Other tests to consider if clinical suspicion

Once the diagnosis of hypertension is established, you should estimate the cardiovascular risk score, with either QRISK (UK) or the cvdcheck tool (Australia). This can help to guide treatment choices. For example, a patient with mild hypertension and a low risk score might opt for lifestyle interventions first, whereas an individual with a high risk score and the same BP might be more inclined to start medication sooner.

Guidelines from various countries are quite similar, but if you want the specifics (as of November 2019): 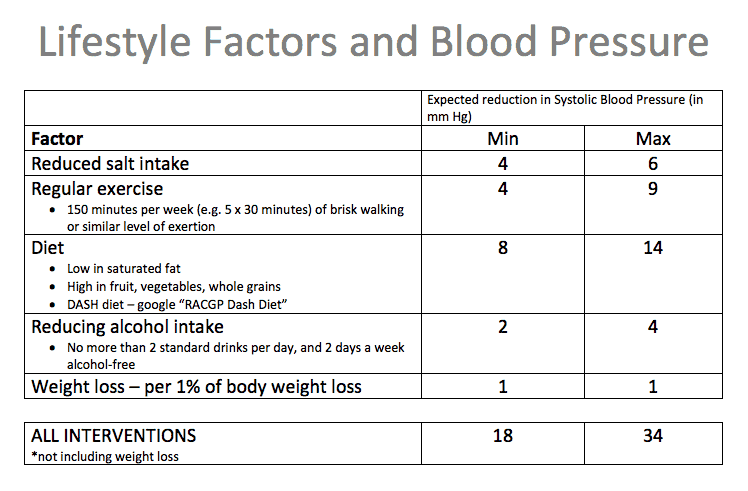 The effect of lifestyle interventions on blood pressure. This is a printout I made to give to my patients in an attempt to give them some motivation! Summarised from: Frisoli TM, Schmieder RE, Grodzicki T, Messerli FH. Beyond salt: Lifestyle modifications and blood pressure. European Heart Journal. 2011;32(24).

The main drugs used for management are:

In cases that are resistant to treatment, other agents that my be considered include:

Generally it is more effective, and has fewer side effects to use multiple agents at a smaller dose, rather than a single agent at a larger dose.

Compliance is a big issue in hypertension, because often patients have no symptoms (particularly in essential hypertension) and as such they often feel like they don’t need treatment.

When is it an emergency?

Patients should be considered to have malignant hypertension and referred for emergency hospital management if:

Otherwise – it can be managed in the community.

As a doctor who works in the emergency department and general practice, I frequently see patients referred by their GP to emergency for asymptomatic hypertension, when the pressure is very high (typically >180/120 mmHg) without the signs of end organ damage. Usually, there is no need for this.

These are less effective than the other drugs at reducing cardiovascular risk factors – particularly stroke.
They do not reduce the risk of diabetes – especially in those patients also taking a diuretic, and may, in fact, increase the risk of diabetes.
They are no longer routine therapy, by may be considered in: 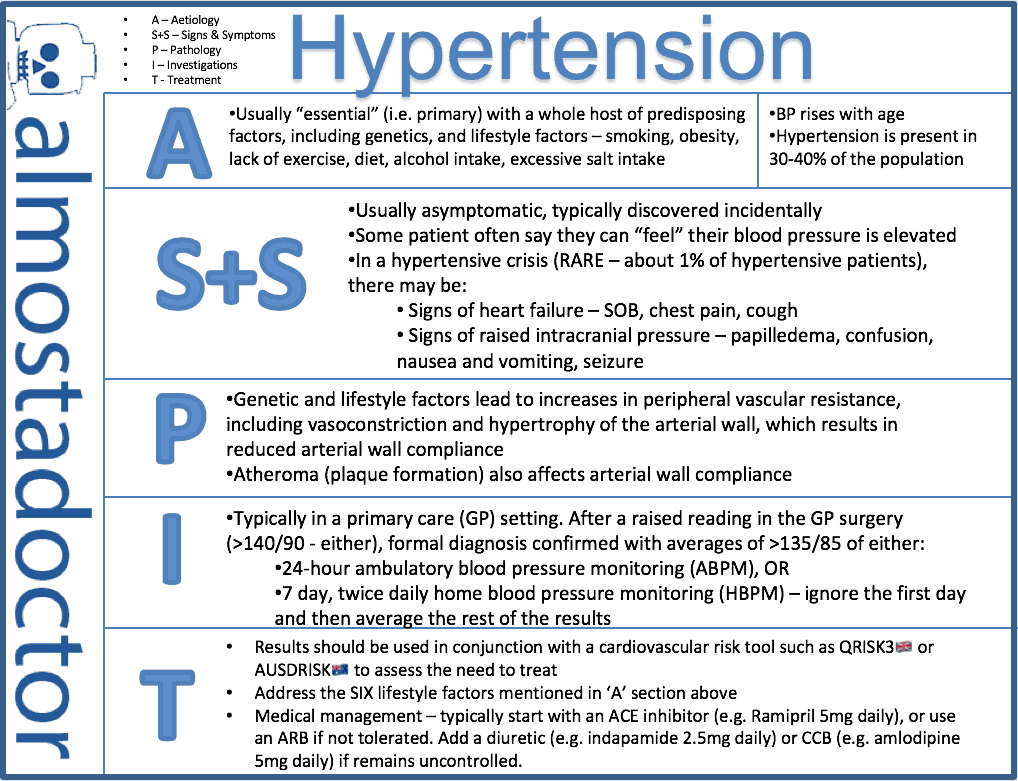