Gout is a disorder resulting from high concentration of uric acid. However, not all patients with a high blood urate level get gout, and having a low blood urate level does not rule out gout as a diagnosis!
Therefore, during an acute attack, checking the serum urate to confirm that diagnosis is not usually useful.
However, serum urate levels can and should be used to monitor the effectiveness of long-term preventative management (usually allopurinol – see below)
Typically it presents in the 1st MTP (metatarsal – phalangeal joint) of the foot, but can affect any joint, and rarely, multiple joints can be affected simultaneously.
It is traditionally viewed as a ‘nuisance’ rather than a serious diagnosis, but it causes significant morbidity (typically lots of sick days from work) in a significant number of sufferers.
The initial diagnosis is often obvious (if in the 1st MTP and has risk factors) but it may be more difficult if other joints are affected (e.g. the knee) – and a joint aspirate may be required for the diagnosis.
Any joint that is warm, red and painful should be considered septic arthritis until proven otherwise. 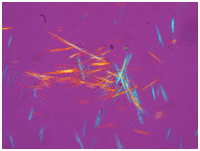 Acute gout – will typically last about 7 days, and may resolve itself if left untreated. With effective treament, symptoms often subside within a couple of days

Chronic (tophaceous) gout – occurs after many attacks. Some patients may never have remission.

This is essentially deposition of calcium pyrophosphate dehydrate (CPPD)crystals. The crystals tend to deposit themselves in articular cartilage. It usually presents as a monoarthritis of the elderly.

The management of gout: Much has changed - RACGP

Foods to Avoid for Gout