Before puberty, the cervix is lined by squamous epithelium. As you progress up into the os, somewhere along the endocervical canal, the squamous epithelium becomes columnar.
During puberty and also during pregnancy, the squamo-columnar junction (SCJ) will migrate down out of the os, and onto the cervical surface, and can be seen from the vaginal side on speculum examination. This is a normal physiological change and is usually referred to as ectopy.
When the SCJ is in this region, the columnar epithelium is exposed to the low pH of the vagina, and this epithelium will undergo squamous metaplasia. Again, this is a normal physiological change.
The site where the columnar epithelium is undergoing metaplasia is known as the transformation zone.
The term transformation zone, and SCJ refer to a similar part of the cervix, but should not be used interchangeably.

After puberty and pregnancy, the SCJ will slowly migrate back up into the cervical os 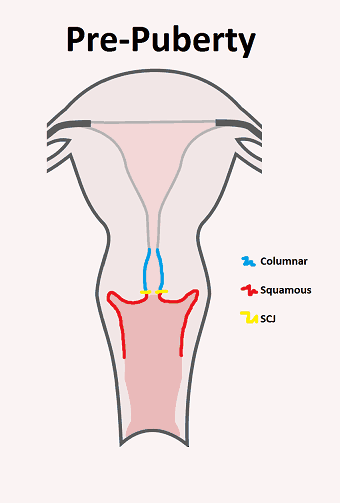 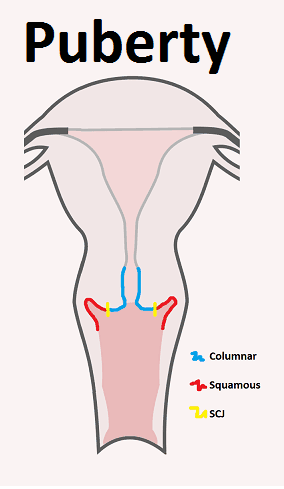 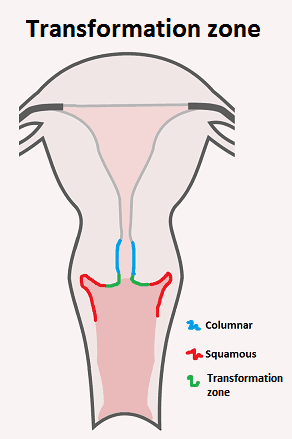 aka Cervical Erosion
This refers to the state whereby the columnar epiethelium is present on the vaginal surface of the cervix (the ectocervix). I 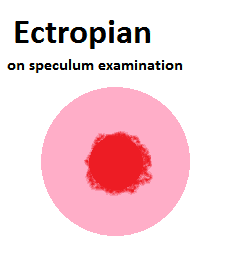 t is a normal physiological state for many women after puberty.

On examination – there may be a red looking area around the os, which should not be confused with other conditions such as cervicitis.
It can result in an excess section of mucous, as the columnar epithelium contains mucous secreting glands, thus there can be a large amount of normal physiological mucus.
It may also cause post-coital bleeding, due to the presence of delicate blood vessels in the columnar epithelium.
Factors which increase the risk of cervical ectropion are generally related to those that increases levels of oestrogen:

Treatment – usually not treatment is required, but if it is particularly troublesome, then you could try cessation of the COC, or in serious cases, ablation therapy may be used.

Pre-cancerous changes and HPV
Early stages of cervical epithelial change can be detected with smear testing, and colposcopy (see screening programme below).

There are >100 types of HPV. Many will be symptomless, whilst others (e.g. types 6 and 11) will cause genital warts, and types 16 and 18 are associated with cervical cancer.
The HPV virus is a single stranded DNA virus that infects squamous epithelium – e.g. respiratory and genitoanal tracts
About 40 types of HPV affect the genital tract.
Types of HPV are classed as ‘high risk’  or ‘low risk’ for cervical cancer

Most HPV infections are transient and will be cleared by the host immune system within 2 years – but during the course of the infection there may or may not be signs of CIN (see below).

This virus will incorporate into the host genome, and cause advanced progression of the cervical epithelium from columnar to squamous.

aka cervical dysplasia/ dyskaryosis
This describes an abnormal growth of the cervical mucosa. It is potentially pre-malignant, but in the vast majority of cases it will resolve spontaneously, with no resulting neoplasia. It is important, because it can be thought of a pre-cancerous stage of cervical cancer. 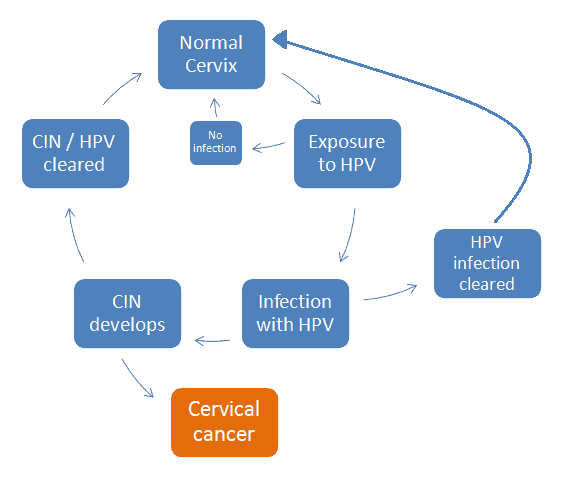 The process of dysplasia is separate from HPV infection. HPV can be present without dysplasia.

CIN 3 – Severe dysplasia – affects greater than 2/3’s of the epithelium, may affect the full thickness

Smear testing – the level of dyskaryosis can usually be assessed with cytology of a smear sample. Those women with abnormal results will be invited to clinic for colposcopy to further assess the level of dysplasia, and be offered treatment
Colposcopy
Contra-indications

Where treatment occurs during the colopsocopy, the clinics are sometimes called One stop clinics – as everything is performed under a single appointment, making it more convenient for the patient, and reducing the risk of DNA, or a patient ‘slipping through the net’ – thus increasing the overall population efficacy of the treatment programme.
Treatment can either be ablation, or excision. Both have success of >90%. Excision is widely used, whilst ablation is not. Excision allow histological analysis of the sample, and also allows a ‘see and treat’ policy, where women can be treated on their first clinic visit, if the colposcopist recommends that treatment is necessary.
Indications for treatment

LLETZ – large loop excision of the transformation zone – aka – LEEP (loop electrosurgical excision procedure).
Used to treat CIN 2 and 3
Usually, local anaesthetic is given first
Essentially, the procedure involves a loop of wire that cuts a dome shaped piece of the cervix away. When a current is passed through the loop, it heats up, and can cut through the cervix. Different loop shapes and electrical power can be used
The excision should be 4-5mm deeper than the affected area – which usually means about an 8mm deep incision
Sometimes, a second pass, with a narrower loop is used to obtain a sample for histology.
Complications

Cone biopsy / hysterectomy – now rarely used, but still suitable in some cases, particularly when there is other co-existing disease (e.g. fibroids, menorrhagia, prolapse, extension of disease into vagina).

Follow-up of CIN
Women with previous CIN have a higher risk of cervical disease in future.
Efficacy
Both excisional and ablation techniques have an efficacy of around 90-95%

In the UK, thanks to screening, it is less common that endometrial and ovarian cancers, however, survival is poorer than endometrial cancer.

Risk of cervical cancer is increased with following (same risk factor as for CIN):

What does it involve?

The way that cervical screening is performed is likely to change in the next few years in the UK. The increased availability of PCR testing for viral DNA makes it much easier to check for the presence of HPV, rather than looking for the pathological changes caused by HPV.
Screening has already changed in some countries (e.g. Australia in 2017) to involve HPV PCR testing. A major advantage of this, is that it can detect infection earlier than can be seen with traditional smear testing, and those with negative results, need only be screened every 5 years. For more information on screening programmes, seen the article Cervical Screening and Smears

Often asymptomatic
May present on smear testing, but this is not usually the case
Non-menstrual bleeding – the typical presentation

Staging is generally clinical.
Procedure of staging
Stages
Note that the staging system does not include reference to lymph node spread. This can occur at any stage, and prognosis is much worse if it is present (e.g. for stage I, without spread, survival is 95% with spread it is around 45%).

In 2008, the NHS introduced a vaccination programme against the two strains of HPV associated with the vast majority of cases of CIN and cervical cancer (16 + 18).
Who is eligible?
Regimen
3 doses, given in the arm or thigh. The vaccine used is Cervarix – which provides protection against HPV types 16 and 18. A rival brand of vaccine also gives protection against HPV 8 and 11, which are common causes of genital warts.
Contra-indications
Side effects
About 10% experience side effects
After the vaccine