Fibroids are also known as leiomyomata. They are benign tumours of the myometrium and are very common, affecting in 1 in 25 women. Risk factors include a family history, Afro-Caribbean ethnicity and women approaching the menopause. Nulliparity/uniparity has been implicated as a risk factor, but many people are not sure whether this is a cause, or a result of pre-existing fibroids.

Their cause is unknown, however what is known is that they grow in response to oestrogens and progesterones. This causes several effects

50% of fibroids are asymptomatic, the remaining display symptoms depending on their type/position. 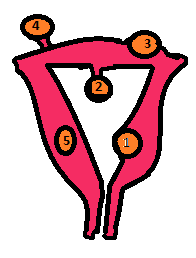 1 = Submucosal fibroid
2=Intracavity polyp
3=Subserous fibroid
4 = Subserosal polyp
5 = Intramural fibroid
Submucosal fibroids and intracavity polyps can give menorrhagia. The polypoid fibroids can twist on their peduncle and cause torsion. This presents as acute abdominal pain, and needs prompt treatment to avoid necrosis and sepsis. Another complication that gives sepsis is ‘degeneration’ of the fibroid due to a decreased blood supply. This gives pain, bleeding and sepsis. As the fibroids grow larger, they start to cause symptoms due to mass effect. These are commonly, dysuria, hydronephrosis, constipation and sciatica.
Fibroids are a cause ofsubfertility, and should a pregnancy occur, they are troublesome. They are a common cause of preterm labour, and also malpresentations, obstruction of labour and PPH. Because of the large bleeding risk you should never try to remove a fibroid at caesarean section.
On examination there may be a pelvic/abdominal mass on palpation. If there is degeneration or torsion the area will be tender too.
A very small proportion of fibroids are malignant. (0.1%)

Many fibroids are incidental findings. If they are being looked for, then an ultrasound will show a uterine mass, however a MRI, laparoscopic investigation or hysteroscopy will be needed to show what type they are. Bloods can let you know hormone levels; however haemoglobin levels are not reliable as a measure of anaemia. Active bleeding causes a decreased Hb, but if the fibroid secretes erythropoietin then the Hb will be raised.

Most fibroids are asymptomatic – these can be left untreated. First line treatment is often to treat the menorrhagia rather the the underlying fibroid itself and may involve Tranexamic acid, NSAIDS or progesterones as they are used in menorrhagia. However they are often ineffective if the bleeding is caused by fibroids, and other treatments should be used. GnRH (gonadotrophin releasing hormone) agonists are useful as they induce a menopause like state, in which the fibroid stops growing and may shrink, however these can only be used for 6 months due to their side effects (similar to the menopause, osteoporosis, increased CVD risks etc). After they are stopped then the fibroids continue to grow as before.
Surgery is often required for symptomatic patients