What is diverticular disease?
It is an acquired condition, in which there are small out-pouchings of the mucosa of the large intestine, known as diverticulae.
Definitions

It is thought that in the presence of a lack of fibre, the muscles of the colon must work harder to move faeces along. This causes very high pressures in the colon, and as a result, some parts of the mucosa will form out-pouchings. 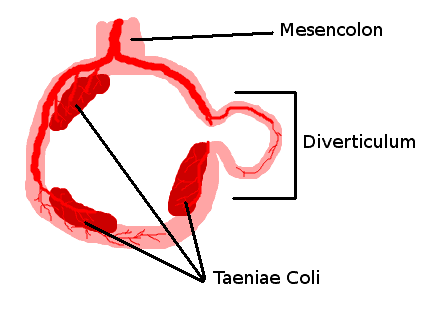 Often patients can be managed at home, but in severe cases, hospitalisation may be required, in which case fluids may be given IV

Diverticulae are acquired defects, and they are most common in the descending colon and sigmoid colon of elderly people.

The exact pathology is not known. It is thought that the high pressures needed to force faeces along the colon in the absence of fibre leads to herniation of the mucosa between the teniae coli. This herniation occurs mainly alongside blood vessels. Many people believe that the increased pressure may be due to changes in the longitudinal muscles of the colon. Often these muscles become thickened and are more likely to spasm, and thus the incidence of high pressure in the colon is likely to increase.
Classically the colonic mucosa will be pleated, due to a shortening of the colon (particularly sigmoid colon) due to the muscle changes described above. The lumen will become narrowed due to the pleated mucosa and hypertrophied muscle.
Diverticulae occur more commonly between the mesenteric and anti-mesenteric taeniae.
Taeniae Coli – these are the bands of longitudinal muscle that stretch the length of the large intestine. They are unusual, because in the rest of the GI Tract, the longitudinal muscle completely encircles the lumen, but in the large intestine, it only runs in three bands, leaving much of the mucosa with the ‘support’ behind it.
The diverticulae themselves consist of mucosa covered by a layer of peritoneum. They have a thin neck, but a large pouch, so that things may become lodged in them. Often there is an artery, or sometimes a vein right next to the neck.
They are likely to become inflamed if something gets stuck in them (e.g. faeces, a nut, popcorn); the most common thing being hard, compacted faeces. Behind this faeces ‘plug’ bacteria are trapped and allowed to proliferate. When they become inflamed, this is acute diverticulitis.
This inflammation will often spontaneously resolve, but in some cases it can progress to:
Repeated episodes of inflammation, even if they do not progress, will often cause further problems. Repeated inflammation will causes a fibrosis and further thickening of the bowel wall, which will narrow the lumen, and eventually lead to total obstruction.
Classically the disease will be on the left side of the colon, and will be characterized by inflammation and perforation.
Rarer Varieties of Diverticular Disease
There appears to be another type of diverticular disease that equally affects the whole colon, and this is not associated with muscle changes. In this disease there may be underlying connective tissue defects that allow mucosal herniation. Bleeding is the most common complication with these type of patients. This type of diverticular disease can occur at any age.
The diverticular disease that occurs in the Asian population seems to occur entirely on the right side of the colon, and its causatory factors have yet to be determined, although it is probably related to diet.

Often, bowel emptying before one of these investigations is carried out is not sufficient, and as a result, small blobs appear on the image, that may cause concern as being cancerous.
The main two signs that will confirm diverticular disease are colonic narrowing in an area of diverticulae. This however in no way rules out the possibility of a co-existing malignancy.

Often this can be treated at home, with antibiotics and plenty of fluids. If the patient is in particularly severe pain, or they cannot take oral fluids then they may require hospitalization and IV fluids with stronger pain relief. If it is particularly sever the patient needs to be nil by mouth.
The symptoms should start to die down within 48 hours. If they don’t then you should consider barium enema or colonoscopy 3 weeks later.
About 1/5 of acute presentation patients require operating on after their first visit to hospital.
Patients who have an initial uncomplicated attack of diverticulitis that clears up have a 70% chance of never having an acute attack again.

Management after diagnosis of diverticular disease

Hey – I just met you, and this is crazy, but you’ve got Tetanus, so take this Ig