This article refers to cancer of the large bowel.
Interestingly, the small bowel is a very rare site for carcinoma, despite the fact it has the highest cell turnover of anywhere in the body, and has a very large surface area.

This is characterised by the presence of adenomas. An adenoma is a benign epithelial neoplasm, with the potential to become malignant.

Red flag symptoms: – patients with the following should be sent for 2 week referral immediately:

Both Duke’s scale, and TNM are used, with a move towards TNM is recent years
The traditional Duke’s system works as follows:

This is characterised by the presence of adenomas.
Adenoma – this is a benign epithelial neoplasm, with the potential to become malignant.

Colorectal cancer is an adenocarcinoma – i.e. it develops from the mucosal lining of the colon. The adenoma will arise from glandular cells of the mucosa. Adenoma is the benign form of the disease.
It is thought that all carcinomas of the large bowel arise from adenomas.
Polyps of less than 1cm diameter are rarely malignant, however they still have the potential to become so. Polyps over 2cm have a 5-10% chance of being malignant.
Usually, the lesion will be a polyp with a stalk, however sometimes it can be a flat lesion – these are known as sessile lesions.
There can be multiple polyps or perhaps just even one. In genetic polyp causing conditions there can be hundreds if not thousands of polyps.
Progression – The adenoma-carcinoma sequence

The mutations can occur at any time and in any order, but are associated with specific effects:

Over 90% of colorectal carcinomas show 2 or more of the above mutations, 40% show three or more. It is the number of mutations, and not the order that affects the development of cancer. 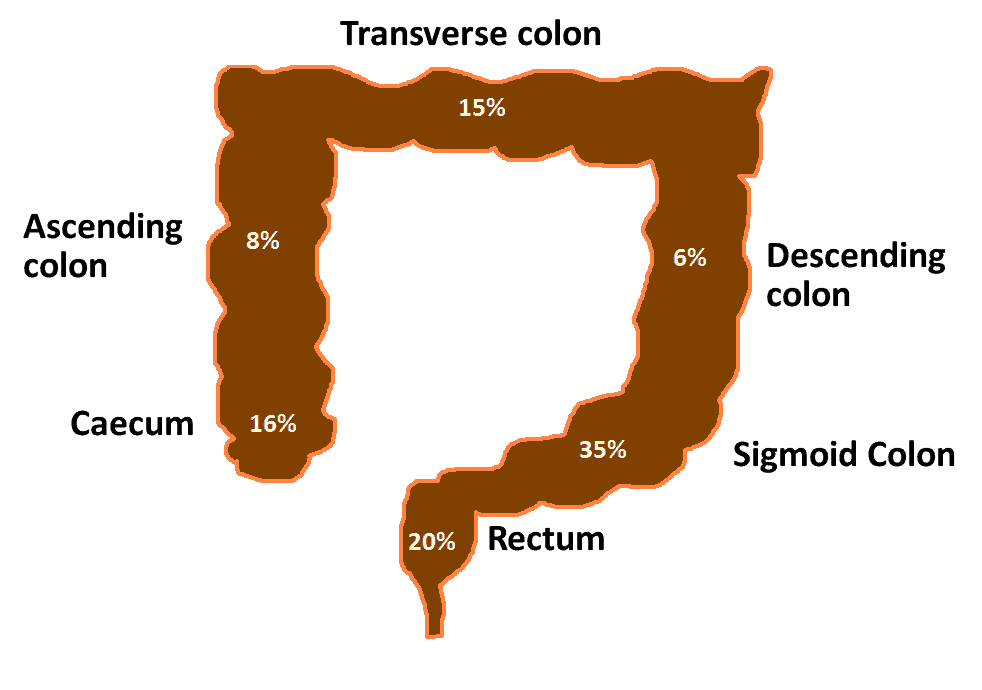 In general the faecal occult blood tests are used for screening and not as an investigation. A positive result will require a full investigation of the entire colon and rectum.
Routine biochemistry – i.e. U+E’s, FBC, LFT’s, CRP.
Colonoscopy – this gives a very detailed view of the whole colon. It has two major benefits – any suspicious lesions can be biopsied; and many polyps can be removed during the procedure. Its major disadvantage is in that it is invasive, and also carries a slight risk of perforation. It also requires sedation.

Barium Enema – provides good anatomical information about large lesions in the colon however, it often misses small lesions and abnormalities that will be picked up by colonoscopy. Many lesions picked up by barium enema will need further analysis by colonoscopy anyway. A sigmoidoscopy is always needed with a barium enema because the barium study provides very poor visualisation of the rectum.

Endo-rectal ultrasound – this is very useful for assessing the level of penetration of the tumour into the bowel wall. It can also identify enlarged lymph nodes, but cannot always say whether the nodes show metastatic spread or not. It can be performed as an outpatient procedure without any sedation or bowel preparation. The test is useful in pinning down the area that needs to be resected.
USS / CT – both of these may be used to locate any intra-abdominal metastasis, although CT is far more accurate. However, neither of these tests is used regularly as they are both reasonably expensive and have not been shown to improve outcome. Pre-operative CT is sometimes used in patients where distant metastasis are suspected.
MRI – this is sometimes used to assess the extent of spread of rectal cancer.
Intra-operative hepatic ultrasound – often used during the surgery to assess spread to the liver. It helps in planning the extent of any liver resection.
Carcinoembryonic antigen – CEA – this is a non-specific antigen found circulating in the blood that is raised in cases of colorectal cancer. Screening for this has not had any noticeable impact on outcomes, and its major use is after a resection, a raised CEA can indicate recurrence.

As usual, this is very important. In recent times, there has been a move away from Dukes staging towards TNM.
The traditional Duke’s system works as follows:

Prevention and screening for genetic conditions