This is a chronic symmetrical arthritis. When we say it is symmetrical, we don’t necessarily mean a mirror image, just that the same joints are affected on both sides of the body. it is also important to remember that RA is a systemic condition, with many extra-articular manifestations.
Typically it affects the peripheral joints, and there is inflammation of the joint (synovitis). Deformity is common and the course is extremely variable.

Most commonly, the condition will present as progressive over weeks to months. These patients have the worse prognosis. But in some cases it can come on in days, or even overnight. Also, it is almost always a polyarthritis, but some cases do present as monoarthritis, most commonly of the knee or shoulder, or with carpal tunnel syndrome.
The symptoms of RA are often worse in the summer / hot weather – eg. If the patient goes on holiday.

A good way to remember them is to go from the outside, in.

RA is a kind of autoimmune disease. We say that the patient is in a hyperimmune state. There is thought to be some T cell activity, but factors released by T cells (IL-2 and IL-4 amongst others) are not very abundant. Macrophages products and activity however, are very prominent. This means that rather than RA being a ‘true’ autoimmune disease, involving some dysfunction in the immune system, the dysfunction is on a cellular level.
In most cases, the reaction is mediated by rheumatoid factor. This is an antibody against IgG (which is itself and antibody!). Specifically, RF is an antibody against the Fc portion of the IgG molecule. Rheumatoid factor and IgG will join together to from immune complexes , which activates complement, and sets of the inflammatory process.
Cases of RA where rheumatoid factor is not present are referred to as seronegative RA.
Rheumatoid factor is also present in many individuals who do not have RA.
It is thought that like many other ‘autoimmune’ type disease, an infection earlier in life may be implicated.
In terms of joint disease, RA results in:

The diagnosis can be made clinically. The American college of rheumatology (ACR) criteria are:
These criteria are only really used for studies, and are not useful in early disease.

There are loads of differentials, particularly if the symptoms are only transiently present for a few weeks (eg. Viral arthritis). If you get asked in the OSCE, the main differential is SLE!

Increasingly, the aim of treatment is to minimize joint damage.

NSAID’s are widely used for symptomatic relief. They do not alter the disease progression in any way. Other basic analgesics (including paracetomol and codeine) are usually ineffective at controlling pain, but may still be used.  You should aim to use a COX-2 specific drug to reduce the risk of GI complications, although in relation to RA, the outcome of selective vs non-selective agents is identical.

These are very useful in inducing remission. Some studies have shown that low dose (7.5mg prednisolone) reduced both symptoms, and progression of the disease. However, you need to give something to prevent osteoporosis, and many doctors have concerns about long-term steroid use. However, steroids are used widely in RA.
They are also used acutely and injected into joints that are severely inflamed.

Functional impairment and pathological joint damage can be reduced when these are used. The earlier in the disease course they are used, the more damage can be prevented.
DMARD therapy should be initiated ASAP after diagnosis.
Nearly all DMARD therapy takes between 6-12 weeks to take effect. They will reduce symptoms (according to ACR criteria) in 20-50% of patients.
All treatments (except hydrochlorequine) require regular blood test monitoring, and should all generally be avoided during pregnancy.
Most DMARD’s act by inhibiting cytokines. This reduces irreversible joint damage.
**DMARDS’s can be combined if they are not producing therapeutic benefit on their own**
Anti-TNF-α  – e.g. etanercept, infliximab, adalimumab
This is used in patients who fail to respond to DMARD’s. TNF-α is one of the crucial cytokines involved in the inflammatory response. It is effective in up to 70% of patients, and is growing in popularity as a treatment. It relieves symptoms, and reduces disease progression, like other DMARDS’s. it is very expensive! – hence on the NHS, other DMARD’s are tried first. NICE guidelines tate to use these only after 2 other DMARD’s have been unsuccessful.
Exercise and physiotherapy – should always be encouraged.

As always, the best care is patient centred, and provided by a multidisciplinary team! – if you are asked about treatment in the OSCE, remember to say these two things!

Modern treatments have greatly reduced the degree of deformity, and improved function for many patients. However, it many cases it is still very disabling. Many patients are able to cope remarkably well despite reduced function. Functional aids help (e.g. modified cutlery, kitchen tools, and modifications on taps (for turning) and stairways etc.).

There is also an increased mortality risk (About 1.5x that of the general population), due mainly to cardiovascular involvement of the disease. The risk of mortality is increased most in those with extra-articular manifestations, and in the most aggressive disease types. 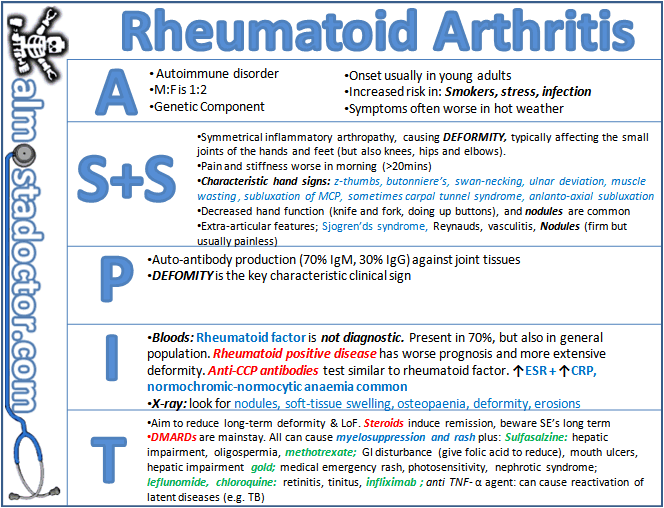