Infective Endocarditis (IE) is a condition caused by infection of the endocardium by bacteria, or very rarely, fungus. It most commonly affects the heart valves (natural or prosthetic), but can occur anywhere along the lining of the heart or blood vessels.

It will most commonly occur at sites of previous damage, however, particularly virulent organisms (such as staphylococcus aureus and streptococcus pneumoniae) can infect previously normal areas of tissue; for example, Staph. Aureus will commonly infect the tricuspid valve in IV drug users.
It can present acutely or, more commonly, subacutely, where the symptoms may be more indolent and non-specific.

Without treatment, the mortality is close to 100%! 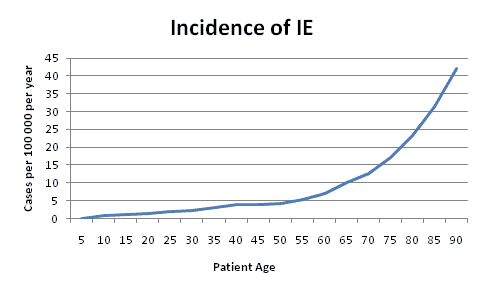 Endocardial damage leads to the formation of thrombi at the damaged site. The thrombus is made mainly of platelets and fibrin. Initially these thrombi are sterile, and are sometimes called ‘sterile vegetations’. In normal circumstances, they usually heal within 24 hours.
The endocardial damage tends to occur around damaged valves, as aberrant jets of blood around these valves cause increased shearing forces in the endocardium, leading to endocardial damage. Also, the valve cusps themselves are avascular, and thus normal immune responses in this region are impaired.
These thrombi (and therefore IE) tend to occur at sites of high hemodynamic pressure, due to the increased shearing forces in these areas. Valves are also more likely to become fibrosed in areas of high pressure. Infections are not common at areas of low pressure, and thus IS most commonly occurs on the left side of the heart.
Transient bacteraemia exists in all individuals at some time. Common sources of bacteria include oral fauna, and genitourinary tract lesions. Therefore, poor oral hygiene and UTI’s are also risk factors.
Bacteria are able to colonise the thrombi, leading to infective endocarditis.
So essentially you require two factors:
Once a thrombus has been colonised by bacteria, we call it a ‘vegetation’. These can become large enough to form an obstruction, or they may also break off to form emboli.
The emboli can affect pretty much any organ in the body (i.e. anything with a blood supply), but commonly affect structures that are highly vascularised, e.g. CNS, lungs, spleen, kidneys, liver. Therefore, common complications include e.g. splenic infarcts, PE. In sub-acute IE in particular,
Infective endocarditis is particularly hard to treat with antibiotics, because the platelets and fibrin in the vegetation prevent antibiotic agent, and white blood cells from being in direct contact with the bacteria.
Also note that there are many rare causatory organisms (such as Haemophillus types), and that 5-10% of cases of infective endocarditis will be culture negative – because the causatory organism will not be able to be grown on normal blood cultures. In such cases, previous antibiotic therapy may be a factor – and this will need to be elicited in the history.

If the patient has a new murmur AND a fever – then it is endocarditis until proven otherwise
It can present as an acute infection, but more commonly presents sub-acutely with an insidious course. In this instance it is sometimes referred to as Sub-acute bacterial endocarditis (SBE)

Typically, this will present in people with known congenital or valvular disease who are experiencing any of the above symptoms, and also possibly:
Patients may have had non-specific symptoms (e.g. malaise, low-grade fever) for several weeks or even months, and may not have any of the specific signs. Be wary of infective endocarditis in patients with known valvular disease, and non-specific symptoms.

Below are further descriptions of some of the textbooks signs of infective endocarditis. Remember, these are more common in sub-acute presentations, as they often take several weeks or months to develop. They are becoming less common in the developed world, as the condition is diagnosed earlier.
Janeway lesions
Osler’s nodes
The main difference between Osler’s nodes and Janeway lesions is that Osler’s nodes are tender and janeway lesions are not!
Petechiae
These are small (1-2mm) purple spots, caused by a minute haemorrhage. They can be caused by loads of things. They can be due to local trauma, and even more unusual trauma type events (e.g. lots of crying can result in petechiae around the eyes) but can also be a sign of something more significant. They are most commonly caused by trauma, but if you see them you should try to find out more about them and not just dismiss them straight off! They may be present in:
Roth spots
These are retinal haemorrhages will a pale or yellow centre.

Any fever in a patient who had had heart / valve surgery should be investigated for endocarditis. The infection tends to affect the valve ring and can resemble either acute or subacute endocarditis.
The most common causatory organism in these cases is staph epidermis – which is a normal skin bacteria. It if often present in blood cultures, but dismissed as contamination.
Causatory Organisms
Staphylococcus Auerus is the most common causatory organism. Gram-positive tend to be more common than Gram-negative, because Gram- positive have better adherence to endocardium.

For definitive information on making a diagnosis, we have the Duke criteria. This divides symptoms into two categories; major and minor criteria:

You can then assess whether infective endocarditis is present or not:

TTE – transthoracic echocardiography – this is rapid and non-invasive, and has a high specificity for visualising vegetations, however, the sensitivity is only 60-70%. Generally vegetations of above 2mm can be seen, but ones smaller than this are easily missed. Also, it can be difficult to distinguish between an abnormal valve, and an abnormal valve covered in vegetations.
Transoesophageal echo (TOE) may identify vegetations of 1mm and bigger in diameter. This investigation is particularly useful in those with prosthetic heart valves. Thus this test has a higher sensitivity of 90%. It also provides a better view of prosthetic valves, and thus is the choice of test for those with these.
Just because you don’t identify vegetations on the echo, does not mean they are not present, and this should not delay treatment!

You need to take a minimum of 3 samples within 24 hours, most places recommend a minimum of 6. Make sure you take the first sample before AB therapy has begun. Also remember the general rules when sending off samples – give as much information with the sample as possible to help the lab identify what it may be, take the samples from different sites, aim to avoid contamination, and do not use an existing line to take samples.

May show signs of MI and conduction defects. A new AV block is suggestive of abscess formation. This test should be performed on admission, and throughout the hospital stay to check for new changes.

This is generally difficult because the organisms are in a protected environment within the vegetations. The layers of fibrin and platelets in the vegetation can prevent both immune cells and antibiotics from coming into direct contact with the bacteria. High concentrations of antibiotics are required for prolonged periods of time for any success. Usually a combination of agents is used, depending on the organism present.
The general mortality for endocarditis is 20-30%. This increases in the case of prosthetic valves and those infected with resistant organisms.
The source of infection (e.g. a tooth with an infected abscess) should be removed as soon as possible.
The best outcomes are achieved when there is a multi-disciplinary team approach.

In cases of penicillin allergy, then vancomycin (a glycopeptide – other example is teicoplanin) is the usual substitute. Penicillins are fundamental to effective treatment, and thus generally those with penicillin allergy have a worse prognosis. Thus it is more important than even to clarify what the patient means when they say they have an allergy to penicillin. An upset stomach is not an allergy!
You should give antibiotics as soon as the blood samples have been taken, and then adjust the regimen in accordance with the results. There is an exception to this, in that you should not give any antibiotics to someone who has recently taken antibiotics until you have the blood results, as you don’t want to confuse the picture even more with further antibiotics.

This is becoming a more popular method of treatment. Between 25-50% of patients will be treated surgically. This will usually involve valve replacement, although sometimes just partial valve repair is performed. These operations will remove the focus of the infection, and hopefully cure the disease
Indications for surgery:
Each case needs to be considered individually, with both cardiologists and cardiothoracic surgeons. Essentially, it is the most severe cases, with the most structural damage that require surgical therapy.
The surgery itself has a mortality of 8-16%, and long-term mortality is between 1-30%, thus outcomes are variable, but probably similar to antibiotic therapy.