Leukaemia is a broad term, applied to a range of blood cell cancers.

The leukaemias can be classified as acute or chronic, and sub-classified as myeloid or lymphoid.  Thus, there are four classifications:

Leukaemia (mostly ALL) is the most common malignancy of childhood – accounting for about 30% of childhood malignancy. The other main three forms of leukaemia – AML, CLL and CML can occur in childhood, but are primarily diseases of adulthood, and most commonly present in patients over 55.

The leukaemias, along with lymphomas and myelomas are a related spectrum of haematological malignancies. They are generally uncommon, but not rare, with the lymphomas being the 7th most common cancer in the United Kingdom.
Although the precise aetiology of all these diseases is unknown, it is thought to be multifactorial.
The way in which these diseases are classified is becoming increasingly complicated and diverse. For example, In childhood leukaemia (80% ALL, 15% AML, 5% other), many varied different chromosomal and genetic factors have been implicated.
Treatment often involves immuno- and myelosuppression – which in itself can be life-threatening, but can sometimes be curative.
It is important upon disease onset to discuss with the patient whether a curative or palliative approach is more appropriate and the rationale for this.  Also, the possibility of treatment failure needs to be addressed at the outset, and not at any later point.

Basically this is unknown, but several factors are thought to be involved:

Leukaemia essentially arises from acquired genetic abnormalities in a genetically susceptible individual – basically, the leukaemias are cancers.
The genetic abnormality can be of diagnostic and prognostic significance. The abnormalities alter the cell cycle resulting in decreased apoptosis.
The Philadelphia (Ph) chromosome is the most common genetic abnormality. It is associated with 97% of cases of CML. This defect is also found in ALL, with incidence increasing with age.

There is proliferation of primitive stem cells, and leading to an accumulation of blasts, predominantly in the bone marrow, which causes bone marrow failure.   In chronic leukaemia, the malignant clones are themselves able to differentiate, and the accumulated cell population in the bone marrow is made up of a more mature variety of cells, and not just blast cells.

There is usually a raised white cell count, and this is where the abnormality is often first noted.  The actual diagnosis is made from examination of bone marrow where this examination includes:
Remember: The point of this analysis is not just to identify which cell type is present; bone marrow examination is also essential for determining prognosis and treatment.

MDS are generally considered precursors to leukaemia. 30% of all individuals suffering with MDS will go on to develop acute myoblastic leukaemia (AML).
This term encompasses conditions that are due to a defect in myeloid stem cells. These syndromes are acquired, and generally occur in the elderly.
There is usually an associated pancytopaenia.
The natural history of MDS is variable, but there is a high morbidity and mortality.

Patients with <5% blast cells in the bone marrow are managed conservatively:

Patients with >5% blast cells in the bone marrow have a worse prognosis.  Their management may include:

Generally, the prognosis for acute leukaemias is poor.  There is a failure of cell maturation, translating into a build-up of immature cells in the bone marrow.  These cells are pretty much useless, occupying marrow space and denying normal cells vital resources. Eventually these cells will accumulate to a point such that they will spill out into the blood.

Symptoms are usually indicative of bone marrow failure, and include the following:
Examination often is normal, but abnormalities may include: 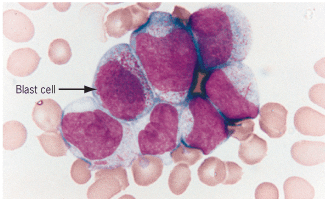 This image shows a blast cell. Its granular appearance suggests that it is of myeloid origin.
Note its large size and primitive nucleus.

Differentiating between ALL and AML

Curative therapy has a varible success rate depending in the type of leukaemia and prognositc factors.

Curative treatment carries considerable risk.  The acute leukaemias can be classified as high risk or low risk.  Low-risk leukaemias include ALL in childhood. AML in an adult with adverse cytogenic features may be considered a high-risk leukaemia.  Generally, the higher the risk, the greater the morbidity/mortality induced by treatment.
Factors that suggest high-risk treatment include:

The decision to treat should not be taken lightly. Treatment will greatly impact on the patient’s life for 6 months to a year, requiring admission to a specialist centre, after which he/she “may never feel the same again”.
Curative care carries with it significant risks and should only be attempted where there is chance of success. ALL in children has the highest success rate of curative treatment.  In some cases, however, the failure rate is very high. If the possibility of cure ceases to exist during therapy, management strategies should be switched to palliative treatment.
The aim of curative treatment is to destroy clonal cells without destroying normal stem cells, so that  the latter will be able to repopulate after clonal cells destruction.  There are three phases to treatment:
*Complete remission – there is a bit of confusion over what this actually means.  It may be defined as no signs of disease on microscopy. However,even when this is deemed the case, there may still be some abnormal cells present which microscopy methods were not able to detect. Thus, complete remission is not synonymous with cure.  People in complete remission can still relapse, and if they do, this is a bad prognostic sign. In this situation the prognosis is no better than if they had had no treatment.  An alternate and more precise method to define complete remission is through examination of cell surface antigens.

It is important that patients don’t view this as a form of “non- treatment”.   The aim of palliation is to optimise the individual’s quality of life in the remaining time that they have.  Palliative care will often still involve chemotherapy and irradiation treatments, although the focus is provision of supportive care in the patient’s ideal environment.
Supportive care
This is the proper name given to the basic care given to both palliative and curative patients.  It involves the following:
Specific treatments
AML

Acute promyelocyte leukaemia (APML)– this is an uncommon variant of AML, which involves a specific translocation mutation, t(15:17). There is almost always coagulopathy, and this is often the cause of death.

ALL – overall, the treatment is very similar to AML, but the drugs given may vary.

Approach to management of leukaemias 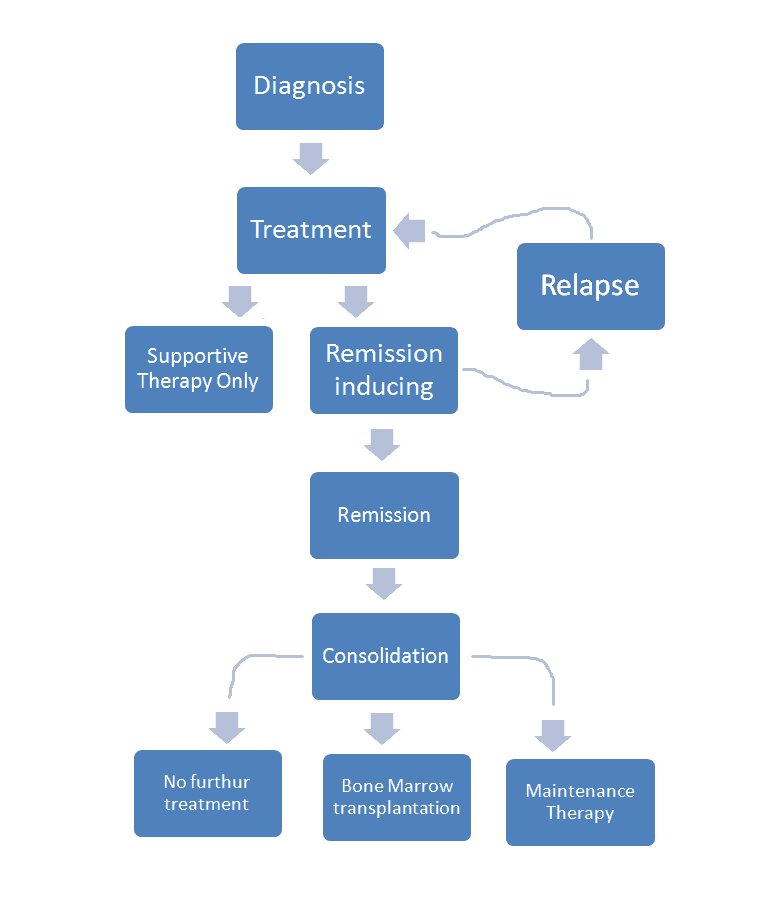 The prognosis for ALL in childhood is very good.

Hyperviscosity syndrome results from increased circulating serum immunoglobulins in Waldenstrom macroglobulinaemia and multiple myeloma, but may also occur in hyperproliferative states such as the acute leukaemias, polycythemia and the myeloproliferative disorders in which there are increased cellular blood components. As serum proteins or cellular components rise, the blood becomes more viscous, leading to the following clinical symptoms:
Therapeutic leukapheresis is performed in patients with very high white blood cell counts, i.e. > 100,000 cells/mm3 and symptoms of leukostasis. Leukapheresis involves the removal of circulating blast cells followed by reinfusion of leukocyte-poor plasma. A single session can reduce the WCC by 20 to 50%.

Many CML and CLL patients have no symptoms, but any of the following may be apparent: SOB due to anaemia, marrow failure and immunosuppression, splenic pain, weight loss, fever and sweats, lymphadenopathy, and hepatosplenomegaly.
CML usually presents in the chronic phase, whereas CLL is often asymptomatic and is discovered incidently.

Investigations carried out in CML and CLL

CML usually presents in the chronic phase.
Many patients have no symptoms, but may have any of the following:

This is essentially the acute terminal phase of CML. Once patients reach this stage mortality is very high.  The patient is said to be in a blast crisis, when there are more than 20-30% blast cells in the blood or bone marrow. Symptoms of a blast crisis include:

There is a high cell turnover rate giving a high urate – this is linked to gout.

Imatinib is a tyrosine kinase inhibitor that prevents the action of the BCR-ABL fusion protein, i.e.this is the abnormal protein produced by the Ph mutation.
This is first-line treatment during the chronic phase.
In the acute phase, i.e. blast transformation, the drug is of limited use and patients will have to have additional treatments.
In the aggressive phase, use of the drug can put the disease back into the chronic phase.
Interferon-α
This is sometimes given to patients who don’t have the Ph mutation.  It was the first-line treatment before Imatinib.
Stem cell transplantation (SCT)
This will cure approx 70% of patients.  However there is a risk of death from graft versus host disease, and infection.  Situation which are more likely to produce a poor outcome with SCT include:
The use of SCT has declined since the advent of Imatinib,however it is still indicated in those with a poor response to the drug, i.e. those who do not have the Ph mutation.
Autologous transplant
Some of the patient’s own bone marrow is removed, screened for the disease, and if it is a suitable sample with some non-diseased cells, the stem cells are transplanted back.
There is a lower less mortality associated with this procedure, but is also less likely to cure than a HLA match.
SOKAL index
This is the tool used to determine prognosis in CML.

CLL is often asymptomatic and discovered incidentally.  In others it can present with:

Bone marrow aspiration and biopsy with flow cytometry is not required in all cases of CLL, but may be necessary in some instances to establish a diagnosis and assess other complicating factors such as anaemia and thrombocytopaenia.

Treatment depends on the stage of the disease, although cytogenetic markers are increasingly used. Clinical staging systems such as the Rai or Binet staging systems for CLL can help to determine when and how to treat the patient.
Chemotherapeutic intervention in early-stage disease is not usually necessary.  The absolute indications for treatments are:
According to NICE guidance, fludarabine monotherapy is not recommended for the first-line treatment of CLL.
Chlorambucil has been considered the drug of choice for first-line therapy of CLL, and when combined with prednisone, chlorambucil is associated with an initial response rate of 60-90% and a complete response in up to 20% of all patients.

Richter syndrome or transformation is seen in 3 to 10% of cases, where CLL is transformed into an aggressive, large B-cell lymphoma. Epstein-Barr virus may play a role in transformation. Lymph node biopsy is necessary for diagnosis. Patients will often present with:
Pneumonia and/or septicaemia may occur due to the hypogammaglobinaemia and impaired T-cell function associated with CLL. Prophylactic antibiotics or immunoglobulin replacement therapy may be helpful.
Anaemia secondary to bone marrow involvement, splenic sequestration of RBCs, and autoimmune haemolytic anaemia may be treated with blood transfusion, splenectomy, or steroids respectively.
Thrombocytopaenia also due to the aforementioned sequelae of CLL is managed as above in the setting of concurrent anaemia.