Gallstones (cholelithiasis) refers to the formation of hard stones in the gallbladder – a process which typically takes years to occur. It is a very common phenomenon which affects about 10-15% of the general population in the developed world. The vast majority of these cases or asymptomatic, but each year, a small proportion present with complications of gallstones.
Gallstones and biliary disease can be a bit confusing, and there is a lot of overlap both the way that patients present, and often with multiple biliary pathologies co-exiting. Essentially, gallstones themselves are not problematic in the vast majority of cases, but can predispose the other problems with the biliary tree.
The gallbladder is the second most common ‘organ’ (behind the appendix) that requires surgery in the GI tract. Stones can be classified as to what is in them, and then also (for treatment purposes) where they are causing a physiological problem.

‘Fair, fat, female, forty’ used to be a term used to describe the typical patient with gallstones – but as noted above, that is only a selection of the risk factors. 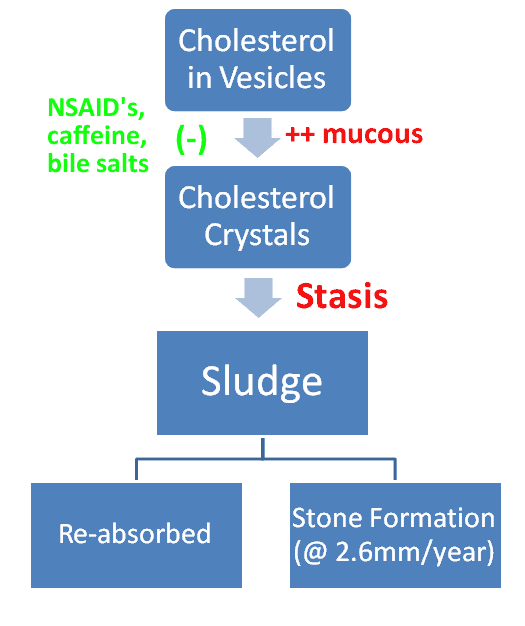 The process of pigment stone formation is completely independent of that cholesterol stones.
Pigments in bile are from bilirubin breakdown. There are 3 main causes that can lead to pigment stones:
Pigment stones affect both sexes equally.

Stones in the gallbladder or cystic duct that are causing biliary colic are unlikely to produce abnormal lab test results. However, stones lying in the common bile duct, are more likely to account for symptoms, as well as for abnormal lab results.

Asymptomatic stones are not normally treated.

The procedure can be ‘open’ or ‘laparoscopic’.

Dr Tom Leach MBChB DCH EMCert(ACEM) FRACGP currently works as a GP and an Emergency Department CMO in Australia. He is also a Clinical Associate Lecturer at the Australian National University. After graduating from his medical degree at the University of Manchester in 2011, Tom completed his Foundation Training at Bolton Royal Hospital, before moving to Australia in 2013. He started almostadoctor whilst a third year medical student in 2009. Read full bio

What a lovely morning for the Opera

This website uses cookies to improve your experience while you navigate through the website. Out of these, the cookies that are categorized as necessary are stored on your browser as they are essential for the working of basic functionalities of the website. We also use third-party cookies that help us analyze and understand how you use this website. These cookies will be stored in your browser only with your consent. You also have the option to opt-out of these cookies. But opting out of some of these cookies may affect your browsing experience.
Necessary Always Enabled

Any cookies that may not be particularly necessary for the website to function and is used specifically to collect user personal data via analytics, ads, other embedded contents are termed as non-necessary cookies. It is mandatory to procure user consent prior to running these cookies on your website.