Endometriosis is a condition in which endometrial, or endometrial like tissue grows outside of the uterus. Although in the vast majority of cases the endometriosis is located within the pelvis (on the uterosacral ligaments, in the ovaries or on the pelvic wall) it can rarely been found in other locations such as the lungs, umbilicus and skin.

In severe cases, large cystic lesions may form, and other lesions can invade the bladder or bowels and cause extensive adhesions.

It typically begins in adolescence with dysmenorrhoea, which gradually increases in severity over time (typically over a period of years). There is often a family history of endometriosis and possible hysterectomy + oophorectomy.

It is believed that retrograde flow of uterine contents – up into the abdominal cavity rather than down into the vagina – is important in the formation of endometriosis. This might explain why symptoms often start off mild shortly after menarche, and gradually progress – typically over a period of years.

It is also believed that there are genetic variations in cell apoptosis and adhesión al qualities, which mean that the tissue which has flowed in a retrograde fashion into the abdominal cavity is more likely to adhere to other structures, and then live on – and continue to function as endometrial tissue.

Symptoms typically settle during pregnancy and breastfeeding, but return again with the return of menstruation. Symptoms almost always settle with menopause.

The tissue outside of the uterus typically responds in exactly the same way as the uterine tissue – in response to hormonal changes with each menstrual cycle.

Many patients with endometriosis are asymptomatic. However endometriosis is a common cause of chronic pelvic pain, and can also cause deep dyspareunia, dysmenorrhoea and subfertility.

The definitive “investigation” is the discovery of patches of endometriosis on laparoscopy – and in practice, in patients with severe and recurrent pain, this is often performed as the diagnostic test.

Often, imaging is not able to detect areas of endometriosis within the abdomen.

Other investigations are often performed and may be supportive of the diagnosis, or of a differential.

Two good websites to have a quick look at. They both have good explanations if revising for explaining stations for OSCEs! 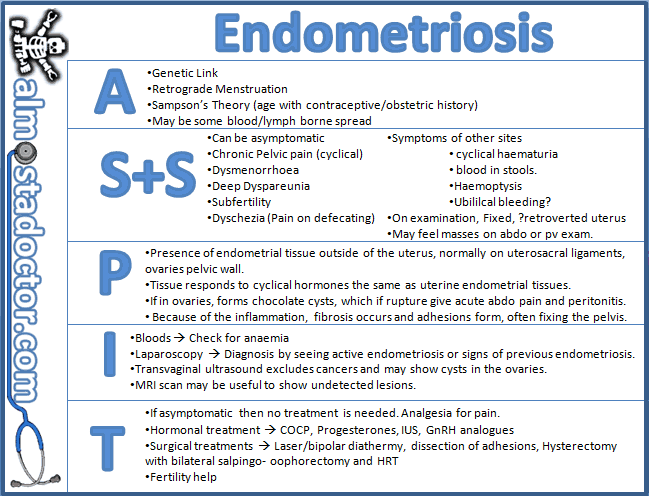