Subfertility (also described as “infertility”) is diagnosed if a couple fails to conceive in one year of regular, unprotected sexual intercourse. It is estimated that one in seven couples in the UK has difficulty conceiving.

The main causes of infertility are: 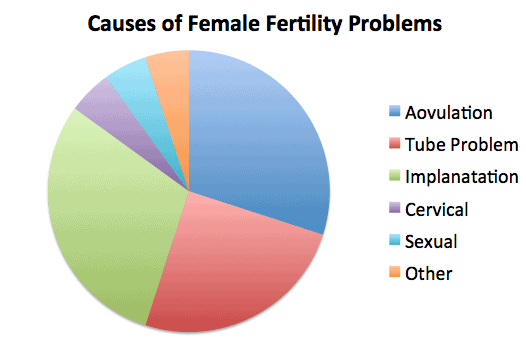 Sometimes causes of subfertility remain unexplained. Couples should be advised that modifiable factors such as increased BMI, use of recreational drugs and heavy smoking can reduce fertility.

For women, Polycystic ovary syndrome (PCOS) is by far the commonest cause. Other causes of aovulation include hypothalamic hypogonadism, hyperprolactinaemia, premature ovarian failure and thyroid disease (both hyper- or hypothyroidism can cause subfertility)

At this point, it is probably worth a quick mental refresher of The Menstrual Cycle !

Causes of female infertility can be divided into:

Sometimes referred to in this context as hypothalamic-pituitary-ovarian dysfunction.

Defined as cessation of menses before the age of 40 (many gynaecologists use age <45). Typically as a result of exhaustion of the supply of oocytes. Affects about 1% of women. Can be caused by:

Problems of tubes, uterus and cervix

Fallopian tubes are the most commonly damaged part of the anatomy. They are delicate structures with cilia that helps to ‘waft’ the egg from the ovary towards the uterus. Problems can be congenital (about 2%) or acquired (98%). Causes of acquired problems include:

Can be roughly divided into:

Disorders of the testes and spermatogenesis

Disorders of the genital tract

When assessing ovarian reserve, additional specialist tests are often used in relation to IVF. These include:

There are three types of infertility treatment.

This is useful for women with Group II Ovulation disorder (PCOS)

Beware of ovarian hyper stimulation syndrome (OHSS) as a result of some of the hormonal therapies used to stimulate ovulation. OHSS is a purely iatrogenic condition.

Many studies have looked at the risks and causes of OHSS, and recommendations to reduce its incidence include:

Other methods include donor insemination (for male with little to no sperm, absent vas deferens), oocyte donation (for female with premature ovarian failure), embryo donation and Gamete intra-fallopian transfer (GIFT).

Disorders of the genital tract