Ventricular septal defects (VSDs) are the most common form of congenital heart disease, and account for about 30% of cases.
The term describes a malformation of the ventricular septal wall resulting in a communication between the left ventricle and the right ventricle. This typically produces a left-tonight shunt of blood, so that on contraction of the ventricles, blood from the left ventricle, that should be pushed to the peripheral circulation, is incited “shunted” across the heart and back into the pulmonary circulation.
Such a defect usually produces a murmur on auscultation.
The location and size of the defect determines the health status of the patient and has a major impact on the management plans.
Neonates may be identified as having a VSD during prenatal scans, however many newborns are discharged home without having had their defect identified. A murmur is then most commonly heard during routine follow up during the first couple of months of life after pulmonary vascular resistance decreases and shunting of blood occurs. Alternatively, the child may present to the general practitioner or cardiologist with failure to thrive, diaphoresis and frequent respiratory tract infections.
Some adults however, are not identified as having VSDs until late on in adult life.
Some VSDs close spontaneously, whilst others require surgical repair. Generally, after closure or repair they have a good prognosis, but if left untreated, they can lead to recurrent respiratory infections and heart failure.
Patients will require anti-bitotic prophylaxis against infective endocarditis. 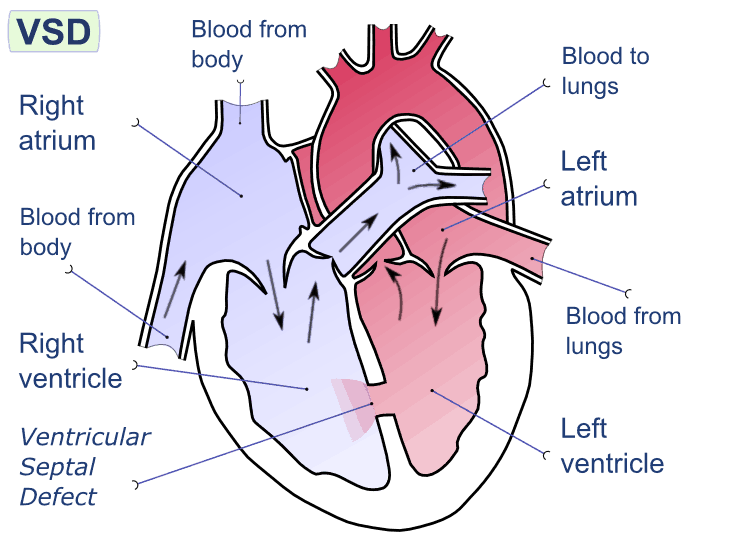 Ventricule Septal Defect. This file is taken from wikimedia commons and is licensed under the Creative Commons Attribution-Share Alike 3.0 Unported license.

The classification of VSDs has not been standardised but is ultimately based upon the size and proportion of septum involved in the defect.
Management options vary upon the degree of defect and age of the patient.
VSD can also be associated with other cardiac conditions such as aortic regurgitation.

A defect in the ventricular septum affects the flow of blood through the heart.
Blood has an option of whether to follow the normal LV outflow tract through the aortic valve or to pass through the VSD to the RV and out through the pulmonary valve.
The path of the blood depends on the pressure differences between the two ventricles.
If pressure in the RV is less than that of the LV, blood will flow through the VSD to right heart resulting in a left-right shunt.
If however, the pressures are relatively equal, then there will be less shunting of blood. For example, if a patient has a relatively low pulmonary vascular resistance and a large VSD, then the blood will flow LV to RV through the VSD as this pathway offers less resistance than the systemic circulation. If pulmonary resistance is higher than systemic resistance, then shunting will be right-left.
A L-R shunt causes more blood to enter the RV during systole. This extra blood is immediately ejected during the systolic contraction and therefore does not cause RV dilatation. However, this increased volume of blood leaving the RV returns to the LA and then LV causing volume overloading of the left heart. This causes high output cardiac failure. The increased volume entering the left heart during diastole does cause dilatation and LV volume can sometimes be used as a marker in the diagnosis of VSD.
The increased volume of blood passing through the RV outflow tract can cause pulmonary congestion or Eisenmenger’s syndrome.

On inspection, the child may be asymptomatic or appear unwell: pale, underweight and irritable. There may be an increased respiratory rate and tachycardia. As there is high output cardiac failure, peripheral pulses are present and CRT may be normal. Urine output is usually normal, however decreased urine output is a worrying sign, suggestive of poor renal perfusion. Any child that has stopped feeding should cause concern for the cardiologist. It is important to ensure that the child is gaining weight adequately and centile charts should be used to monitor this.
On palpation, a thrill at the left sternal edge may be felt. Right ventricular hypertrophy due to increased flow through the RV may cause a heave. Systemic venous congestion can cause hepatomegaly.
Percussion is of little benefit in the ill infant.
On auscultation, there is a harsh pan-systolic murmur at the left lower sternal border that ranges from grade II-V. It may be heard throughout the chest. A diastolic murmur is suggestive of functional mitral stenosis due to the increased volume of blood passing through the left side of the heart. The child may be wheezy due to pulmonary congestion.

Small VSDs may be left alone for spontaneous closure, and typically close within the first year or two of life.
Medical management is always the first stage in the treatment of VSD. This can include no treatment at all, loop diuretic therapy (with co-prescribed spironolactone or amiloride) or angiotensin-converting enzyme inhibitors.
Surgical management can take place via percutaneous methods or open heart surgery and the application of a patch. A device shaped like an H can be passed through the defect and then inflated either side of the hole to close the defect.