When we talk about lung cancer, we are generally referring to tumour of the bronchus.
Death normally occurs after 30 ‘cell doublings’ of malignant cells.
In this document I will be referring to bronchial carcinoma unless otherwise stated
The vast majority of these are primary, and related to smoking, however, you can also get lung secondaries from cancer of the:
The prognosis is extremely poor

Smoking as a risk factor

Relative smoking risk:
After 10 years of stopping the risk is greatly reduced, but it never reaches that of non-smokers
Types of tumour
For the provision of treatment, tumours are divided into small cell carcinoma and non-small cell carcinoma. However, there are actually four types of bronchial carcinoma:
*this is the time from the initial malignant change to presentation
A good tip – tumours arising in a main bronchus tend to present earlier than those arising in a small bronchus – because they will cause far greater symptoms at an early stage.
80% of tumours are in the lobar bronchi – the rest are in larger bronchi. 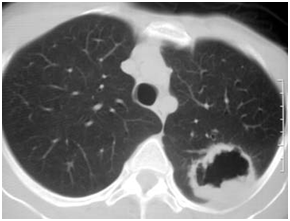 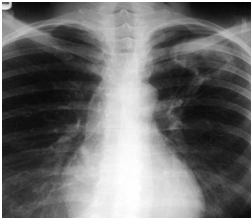 aka oat cell carcinoma
Arise from endocrine cells (Kulchitsky cells). These are APUD cells, and as a result, these tumours will secrete many poly-peptides. Some of these polypeptides will cause auto-feedback to induce further cell growth. They can also cause various presentations such as Addison’s and Cushing’s disease.
Small cell carcinoma spreads very early and is almost always inoperable at presentation. These tumours do respond to chemotherapy, but the prognosis is generally poor.
APUD cells – there are two types:

You can also get primary small cell carcinoma in the oesophagus, stomach and cervix.

The tumour may spread to the pleura, either directly, or by lymphatic drainage.

Nodal – supraclavicular and mediastinal lymph nodes can be affected

Blood borne – mets to the liver, bone adrenal glands, skin and brain. Mets in the brain can cause change in personality, epilepsy, or a focal neurological lesion. The deposits in the adrenal glands are rarely symptomatic, but often found on post mortem.

Even a very small primary tumour can result in wide-spread metastasis. This is especially true of small cell carcinomas.

The definition of a paraneoplastic syndrome is a non-endocrine, non-metastatic complication.
These can present several years before the tumour itself presents. They are generally rare – e.g. in comparison to local and metastatic spread.

Mortality rates for lung cancer are the same as ten years ago. This is due to the fact that lung cancer presents so late.

This is usually normal, unless there is significant bronchial obstruction, or the tumour has spread (e.g. to pleura; pleuritic pain, supraclavicular nodes; palpable or mediastinum).
Tumours in large bronchi may cause collapse of the lung, or obstructive emphysema.

For lung cancer, you want to know the type of tumour, the location of the tumour, and the performance status to be able to know what treatment to give. As is the case for many conditions, treatment is best planned by the Multi-disciplinary-Team.
Prognosis is poor. As a general rule:

Operable tumours are the ones that tend to be asymptomatic and are discovered incidentally. Usually, lung cancer presents with a complication; e.g. pleural effusion, metastatic pain.
Surgery as a treatment option is typically rare.

Treatment options in more detail
Small cell carcinoma
These have nearly always metastasised by the time of recognition. Chemotherapy may be of some use; the regimens currently recommended are:

5 year survival is only 10% with treatment. Mean survival is just 2-3 months after diagnosis.

Is now a day patient treatment. Common treatment is Gemcitabine and Carboplantin. There are extensive side-effects, and although chemotherapy can prolong life, many patients opt not to undergo treatment, due to the reduced quality of life during this period.

Performance status – assessment for chemotherapy
This is a WHO classification and it is scored 0-4. The fitter you are the lower the number!

Chemotherapy is only available for those in 0-2, and under the age of 80.

Brain Metastasis and survival
In cases involving brain mets the survival drops to 1-2 months. Prognosis is determined by the brain mets, and no longer by the primary tumour.

Non-small cell carcinoma
Surgical excision is the treatment of choice for tumours at the periphery with no metastatic spread. However, only 5-10% of cases are suitable for resection, and 70% of these will survive to 5 years.

Radiotherapy – this can be given if surgery is declined, or in cases where surgery is not suitable. Poor lung function is a contraindication for this type of treatment. It can be curative in selected patients, typically those with slow-growing squamous carcinoma.

Palliative care
This is a very important part of treatment. Involvement of specialised practitioners at an early stage (e.g. MacMillan nurse), often with the family can help plan and provide for the future. As the patient nears the end of their life, they will still often attend outpatients appointments at hospital, but these are unlikely to alter previous treatment regimens. Patients may plan to where they would prefer to spend the last hours of their life (e.g. at home, or in a hospice), and good planning, with social and medical support can avoid stressful and unnecessary acute hospital admission when the patient’s health deteriorates.

Asbestos is a naturally occurring fibre, which is relatively inert, as well as being fireproof, and a good insulator. In developed countries it was used widely to insulate buildings during the mid 20th Century.
Several types of asbestos fibre exist, varying by the quality of the individual fibres. These types exists in three colours – white, blue and brown. Blue is the most dangerous clinically. Its fibres are up to 50mm long, but only 1-2nanometres wide. Very rarely, other similar sized fibres – such as in volcanic expulsions, can cause mesothelioma.

Asbestosis
This is fibrosis of the lung tissue secondary to exposure to asbestos.. Is a progressive condition that will present 5-10 years after exposure. Causes severe reduction in lung function and progressive dyspnoea. Restrictive pattern. There may also be finger clubbing, and bilateral end-inspiratory crackles.

There is no curative treatment, although steroids are often prescribed (little evidence for their use).

Mesothelioma
Can result from only light exposure to asbestos fibres. Is progressive and patients will have a restrictive pattern on pulmonary function tests. Often presents with pleural effusion, and progressive dyspnoea.  There may also be chest wall pain and ascites due to abdominal involvement.
The tumour will begin as pleuritic nodules, which gradually grow and extend around the whole surface of the lung, and even into the fissures, hence the chest wall pain. Intercostal nerves and hilar lymph nodes may be invaded.

The median survival is around 2-years from presentation.
The number of cases has been steadily rising since the early 1980’s, and is now around 1000 per year in the UK.

There is no treatment.